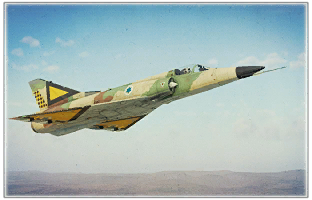 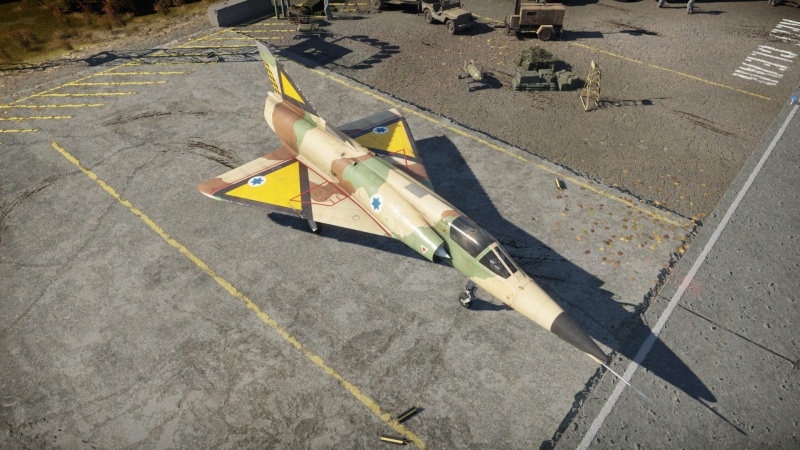 The Nesher is a rank VII Israeli jet fighter with a battle rating of 10.3 (AB/RB/SB). It was introduced in Update "Winged Lions".

The Nesher has no armour and can be critically damaged with just one short burst of enemy fire. Even if the Nesher survives, it will be highly damaged and some major components like the elevator or aileron controls will likely be destroyed. The Nesher has self-sealing fuel tanks located in the rear, front part of the wings, and the forward fuselage.

The Nesher is armed with:

The twin 30 mm are a great tool to use for intercepting close range enemy aircraft. The 30 mm are also mounted centrally, making it easier to aim without having to level out your wings to fire. The DEFA 30 mm will make short work of any aircraft attempting to dogfight, though their slow velocity and rate of fire can make it difficult to hit the target.

The Nesher can be outfitted with the following ordnance presets:

The Shafrir 2 has short range and low G overload, similar to the Shafrir or AIM-9B. It is best used from behind enemy lines, against unaware and non-manoeuvring targets.

Although it has less explosive mass than the AIM-9D, the upgraded seeker of the AIM-9G makes target tracking easier, as well as having a larger lock angle, and the ability to slave the seeker to a radar lock. It retains the same excellent range and manoeuvrability of the AIM-9D, along with similar susceptibility to flares.

During the first two decades of its existence, the State of Israel developed a close technological alliance with the Republic of France. The primary expression of this alliance was the large-scale export of military aircraft from France to Israel, including the Ouragan, Vautour and Mystere. By 1965, France had helped turn the Israeli Air Force (IAF) from an improvised World War II-era operation into one of the most formidable, high-tech, jet-equipped air forces in the world. This cooperation reached its zenith in the early 1960s with the adoption of the Mirage III as Israel's primary fighter jet.

Cooperation was so tight, in fact, that Israeli engineers were heavily involved in the development of an advanced successor to the Mirage III - the Dassault Mirage 5 - which was designed according to Israeli Air Force combat experience with the Mirage III and was tailored specifically to their requirements. Israel, still an economically-struggling nation at the time, nevertheless funded a large part of the project by purchasing 30 units of the Mirage 5 in advance of its production, with an option for 20 more.

Unfortunately for the Israelis, in 1967 political machinations eventually put an abrupt end to this long period of cooperation. French president De Gaulle, hoping to strengthen relations between France and the Arab states, threatened to embargo all sales of weaponry to Israel in the event that it attacks any of its neighbours. In June of 1967, only two weeks after the Mirage 5 was first test-flown in France, Israel did exactly what it was warned not to do - starting the Six-Day War with a preemptive strike that crippled both the Egyptian and Syrian air forces within hours. The French embargo took effect immediately, halting the sale of Mirage 5s to Israel. Following the war, attempts were made by Israel to convince France to drop the embargo. Instead, the situation further deteriorated when, in January of 1969, an Israeli raid on the international airport in Beirut caused the French to expand their embargo by forbidding the sale of spare parts for military aircraft. This was the final nail in the coffin of the Mirage 5 deal. Israel was eventually reimbursed for all 50 planes it had paid for, and those planes instead joined the French air force.

The Israeli Air Force now had a whole fleet of French jets that it could no longer hope to maintain. With Israeli-American military cooperation still in its infancy, the Israelis had to urgently find a reliable source of new fighter jets to replace the Mirage IIIs. Fortunately for them, the owner and CEO of Dassault Aviation, Marcel Dassault (himself a Holocaust survivor), was adamant to circumvent the French embargo by any means necessary. With the French government essentially turning a blind eye, he smuggled schematics, parts, and engines from the Mirage 5 project to Israel, and even gave several high-ranking Israeli Aircraft Industries (IAI) executives a thorough, clandestine tour of the Mirage 5 factories in France. With these materials and know-how, the IAI was now able to build its own factories to produce what was essentially an exact copy of the Mirage 5 - with a few minor changes to make it compatible with Israeli munitions and requirements.

The new model was named the Nesher ("Griffon Vulture"). Production started in 1969 on the first empty airframes. The weapons, electronics, seats and engines were smuggled from Dassault shortly afterwards. The first operational plane was delivered to the IAF in May 1971. Unlike the Mirage 5, the Nesher was fitted with Israeli-made avionics, improved range, an ejection seat, and additional hardpoints compatible with a wider range of AAMs including the American AIM-9D Sidewinder and the Israeli Shafrir 2. The avionics were made simpler to operate, making the plane more forgiving to rookie pilots.

The Nesher was slightly less manoeuvrable than the Mirage IIICJ it was meant to replace, but it had a larger payload and longer range. The reduced manoeuvrability did not stop the Nesher from excelling during the Yom Kippur War of 1973, where it achieved an incredible kill-to-loss ratio of 111:3, primarily against MiG-19s and MiG-21s.

Between 1971 and 1974, a total of 51 single-seat Neshers were built for combat operations, as well as 10 two-seat trainers. Production gradually stopped in 1974 as IAI factories switched over to the new Israeli Mirage variant - the Kfir. The Nesher was gradually retired from service starting in 1978. After a good lifetime serving the Israeli Air Force, many Neshers were refurbished and sold to Argentina's air force, where it was renamed the "Dagger". These aircraft retired from service as late as 2015.