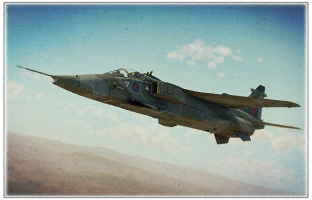 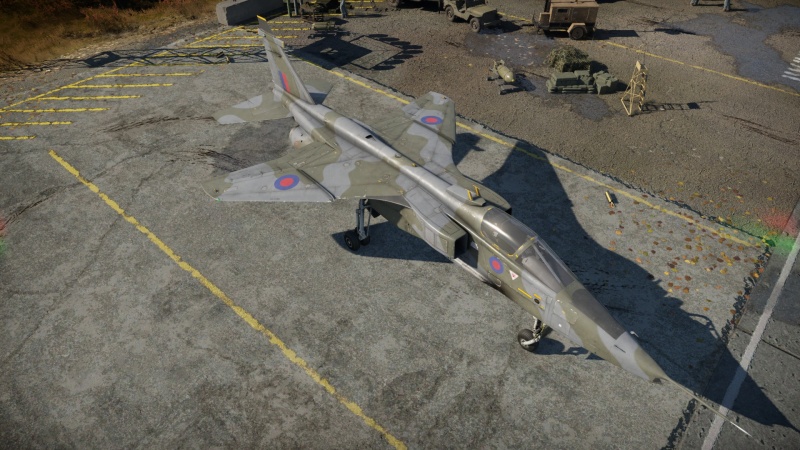 The Jaguar GR.1A is a rank VII British strike aircraft with a battle rating of 10.0 (AB/SB) and 10.3 (RB). It was introduced in Update "Ground Breaking".

The Jaguar GR.1A handles nearly the same as the previous Jaguar GR.1. However, due to having access to Rolls-Royce Turbomeca Limited Adour Mk.104 engines, the acceleration, cruise speed, and maximum speed are significantly increased. It generally maintains similar flight performance and use, with a slightly reduced turn-time at high speeds. It has the same loadout capacity as the previous Jaguar, performing nearly exactly the same with mounted ordnance. It is nowhere near being the fastest plane at its battle rating but can become a difficult opponent when being hunted down, especially if the Jaguar has a speed advantage.

Taking off with the Jaguar GR.1A is pretty straightforward, no changes from the GR.1 with the exception that it reaches the minimum lift velocity faster than the GR.1. Flaps are not required for take-off even with the 8 x 1,000 lb bomb payload. However, it is recommended to be used for an easier take-off. Carrier take-off are the same but with a much shorter take-off time. Be aware of centering the aircraft correctly with the deck or else a landing gear might break.

The aircraft gets no extra armoured protection, therefore it's extra weak against autocannons. The fuel tanks are self-sealing. This will help you a lot when getting shot at by enemy autocannons, but not air-to-air missiles, which are very common at this battle rating. As seen in the previous Jaguar, damage done to the engines will most likely result in making a non-recoverable manoeuvre and they are prompt to catch fire easily. Keep this in mind when fighting other aircraft and SPAA. The Jaguar has access to a Radar Warning Receiver, which can be useful to alert the pilot of incoming aircraft with radar-guided missiles, or ground based radar anti-air.

The use of chaff and flares significantly improves the survivability of the aircraft in all game modes. Flares are a very useful tool to combat both IR-guided air-to-air missiles and ground vehicles such as the Ozelot, Type 93, and SIDAM 25 (Mistral). However, chaff still remains useless against SPAA radars. The best countermeasure against them is to stay out of sight by flying too high or too low.

The Jaguar GR.1A is armed with:

The Jaguar GR.1A can be outfitted with the following ordnance presets:

The Jaguar is mostly an air-to-ground plane with defensive capabilities against aircraft. The role of the Jaguar is pretty straightforward when it comes to air battles: base bombing or ground/naval units bombing. It is recommended to utilize the different bomb payloads combined with flares or with the AIM-9G if desired. Rockets are not recommended to be taken as they are inaccurate and useless against lightly armoured vehicles, even with the ballistic computer. GBUs are the main weapon against any vessel. They are recommended to be used against destroyers, cruisers, battleships, and even enemy carriers. A well-placed Mk.13 is enough to sink a carrier.

The Jaguar has a wide variety of payloads for all types of players: for those who want to be fast and engage bases or ground targets as quickly as possible, and for those who want to carry out as much destruction as possible. The main advantage of the GR.1A over other strike aircraft is its ability to carry AIM-9G as well as significant ground ordnance due to the over-wing pylons. The recommended payload for a fair trade in speed, firepower and defensive capabilities is the 2 x AIM-9G + 6 x 1,000 lb bombs payload, which provides more than enough bombs to take 2 bases in maps where there are only 3 bases and airfield, or 1 of the 4 respawning bases which take double the payload. If the player wants to play a more aggressive full bomb payload, then the 8 x 1,000 lb bombs payload can be carried. 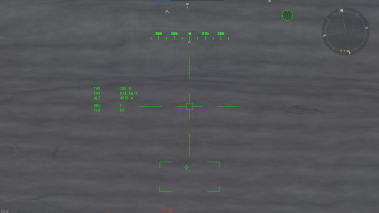 As seen in picture, TIALD shares similarities with the helicopter gunner sights.

The Jaguar GR.1A brings completely new systems to Great Britain's aircraft tech-tree. While similar to the French Jaguar A, it does has its changes, pros and cons. The guided munitions features have been seen in other aircraft in-game such as the MiG-27M, MiG-23, A-7D and the like. However, the Jaguar GR.1A is the only top tier aircraft to not have access to guided missiles, only bombs.

The TIALD (Thermal Imaging Airborne Laser Designator) is a new targeting pod added to the Jaguar GR.1A which, unlike the French Jaguar, has access to thermal vision, making target acquisition a much easier task. While in use, it acts very similar to helicopter gunner sights for modern helicopters, utilizing almost the exact same functions. Range is not displayed in the HUD as seen in helicopters. However, this is not a crucial aspect of accurate bombing as the range is fully dependent on the aircraft's attitude (altitude, speed, angle of attack, etc). If the user is familiar with helicopter HUD, you will be familiar with the indicators to the left of the reticle.

These indicators signal the following: THR (throttle), IAS (indicated air speed), ALT (altitude). These indicators will stay fixed to the sight regardless of the loadout. The lower indicators will vary according to the loadout carried at the time, in this case: GBU (Mk.13 guided bombs) and FLR (chaff and flares according to the loadout). The TIALD has a double functionality, not only working as the laser designator for GBUs but can work as an additional scouting tool for better situational awareness, both for air-to-ground and air-to-air. Functionalities of the TIALD will be explained further below.

Something to keep in mind is that while the TIALD pod can look backwards it cannot look directly downwards, this means that if you have the pod locked to a target and you fly directly over the target the pod can lose its lock on the target when it hits the downwards limit. If you allow this to happen, it is likely the bomb will miss the target before you are able to get the targeting pod pointed at it again. In order to avoid this, you can fly slightly off to the side of your target (rather than passing straight over it) so that the pod can keep pointed at the target by swivelling sideways, rather than straight down like it would have to if you few directly over it.

The Mk.13 GBU are capable laser-guided bombs able to destroy any ground unit with a single hit and cause significant damage to any vessel in-game, including aircraft carriers. Unlike other unguided bombs, the GBU have extended range even if no lock is made. This is due to having surface controls that keep the bomb level during flight when there is no guidance. In order to successfully perform precision airstrikes, some basic keybind controls have to be done first for this to work properly. First, the "Sight Stabilization" keybind under the Controls > Aircraft > Weaponry must be set, to lock on to a target. 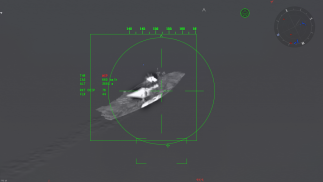 In order to properly make a laser lock, a target that can be locked onto must be found, which is easily achieved by using the thermal imagery on the TIALD targeting pod. If a target is successfully acquired, a fully enclosed square will be displayed around the target. A non-locked target will show the box as a striped square. With a successful lock, GBU can be released in multiple ways. However, there are some things to keep in mind before dropping the GBU. If we have a locked-on target, hitting the "Sight Stabilization" key again will pop up a circle over the box. The circle gives free camera motion while staying slaved to the movement of the target. This is particularly useful to compensate for speed when hitting moving targets, or to simply adjust the desired point of contact. Once the guidance position is satisfactory, the bomb can be released. The GBU tends to maintain a horizontal flight path if it does not have a laser lock, for this same reason the GBU must be dropped at an angle. This is particularly easy as the CCIP ballistic computer shows the general area of the impact zone. As long as bomb is released inside the circle of the CCIP marking, the bomb will hit the marked location precisely. 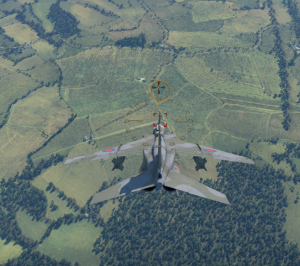 As soon as the bombs are released, they will instantly start to guide themselves towards the target as long as the laser lock is active. Keep in mind the bombs are dependent on gravity and are not self-propelled, so when attacking a moving target, make sure to compensate for the target's movement for a successful hit. There is a slight delay between the bomb's release and it beginning to guide itself in to the target.

A single GBU is needed per ground target, not only because the bomb has the equivalent to 288 kg of TNT, but the pinpoint accuracy will, most of the time, hit the enemy vehicle's roof, destroying it 99% of the time. Assault fuze is advised here, no need for a time fuze for multiple reasons: There is no risk of explosion self-damage as bombing can be easily done at stand-off distance, assault fuze will ensure the bomb explodes when it hits on target which, in case the target is not hit directly, reduces the escape window for the target.