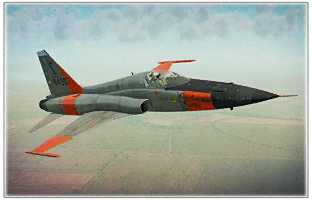 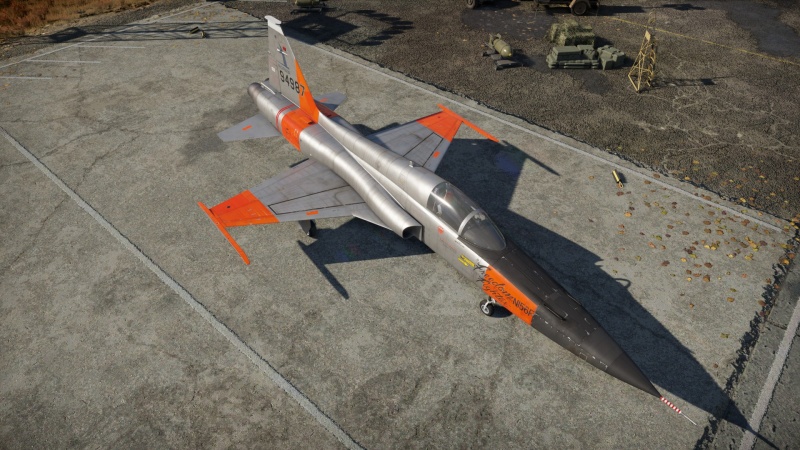 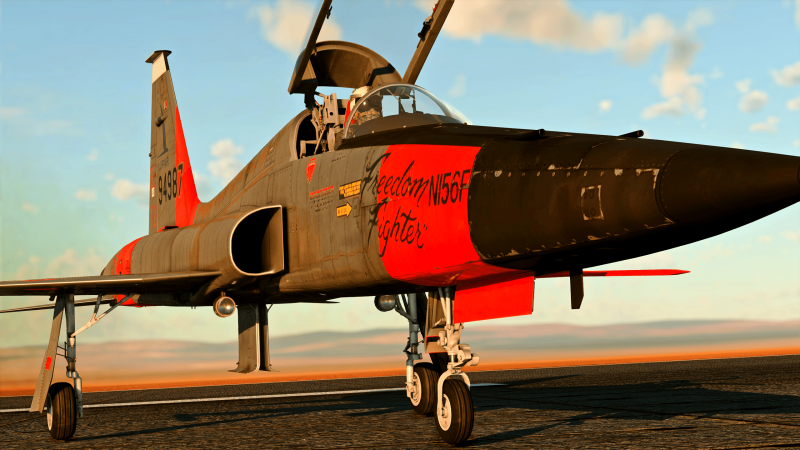 The F-5A Freedom Fighter is a gift rank VI American jet fighter with a battle rating of 10.0 (AB) and 10.3 (RB/SB). It was introduced during Update "Direct Hit" as a reward for the 2021 Export Order event.

The F-5A has neither armour plates nor bulletproof glass and the fuel tanks are self-sealing.

The F-5A can be outfitted with the following ordnance presets:

As the F-5A does not have any radar-guided missiles (AIM-7s or equivalent), and it's not particularly fast, it is recommended to stay low and try to avoid the first clash between teams by flying to the side. When flying into the aforementioned engagement zone, pick out single fights or distracted enemies. The AIM-9E is not a reliable weapon and is easy to dodge, so try not to take missile shots from the sides or at a heavily manoeuvring opponent. When the opportunity to dogfight arises, take it only when you're sure other enemies are either distanced or far enough away from your position to not interrupt your fight and pick you off. When in a dogfight, you are almost always superior in manoeuvrability when compared to your opponent. MiG-21s or the J35s will be better in the first turn, but they bleed a lot of speed due to their delta wing design. Avoid their guns in the first turn, and use yours to take them out. While you have only 2 guns, they have a high muzzle velocity, making them easy to aim. The only downside with the cannons is their damage potential: you need to put several rounds on a target to destroy it.

The F-5A Freedom Fighter is a light fighter designed by Northrop in the 1950s. Designed as a private export venture, the aircraft was designed in both fighter and trainer variants (N-156F and N-156T). The F-5A entered service in the 1960s and was widely exported under the US's Military Assistance Program to developing countries. The F-5A would later be developed into the more advanced F-5E, and later on, serve as the basis of the YF-17 / F/A-18. 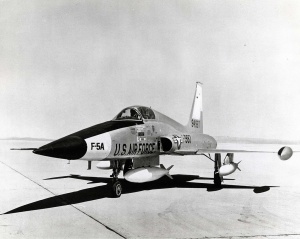 Design work for the F-5 began in the early 1950s under the leadership of Northrop's VP of engineering Edgar Schmued, who was well-known for his work in designing the P-51 Mustang and F-86 Sabre with North American Aviation. By 1955, the design team had selected the General Electric J85 engine as the powerplant. That year, the US Navy issued a requirement for a light jet fighter to operate off its escort carriers, and Northrop quickly adapted its prototype design for naval service; however, the Navy requirement disappeared when the escort carriers were retired, and Northrop redesigned its aircraft once again. By this time, the prototypes were designated as the N-156T and N-156F, as trainer and fighter variants, respectively.

The final design of the N-156 would emerge in March of 1956, with a conventional wing design and its two J85 engines mounted in the rear fuselage. While the USAF had little interest in a light fighter such as the N-156F, it selected the N-156T as the replacement of the T-33 Shooting Star, which would go on to enter service as the T-38 Talon. The first YT-38 would fly in July of 1959 and serve as the USAF's primary trainer, a role it continues to serve today. Meanwhile, the USAF also ordered three N-156F prototypes to fulfil its requirement for a low-cost fighter that could be exported to less developed countries under the Military Assistance Program (MAP). This role was confirmed by the Kennedy administration's selection of the N-156F as the winner of the F-X competition, for a low-cost fighter to be exported under the MAP program. The N-156F was subsequently renamed the F-5 "Freedom Fighter".

The F-5A's design centered on its two J85 engines, each producing up to 22 kn of thrust with afterburner. While initial N-156 prototypes had engines mounted mid-wing and ahead of the tail (similar to the F-4), the final design featured a pair of engines at the rear of the vehicle. The F-5 could attain a speed of Mach 1.4 at high altitude and could carry up to 6200 lbs of ordnance on five underwing hardpoints. Being optimized for ground attack, the F-5 lacked an air-to-air radar. However, it could carry two AIM-9 Sidewinders on wingtip pylons along with its nose-mounted 20 mm cannons.

Being designed for export, a total of 624 F-5As were produced by Northrop, including 3 YF-5A prototypes. Another 200 F-5B two-seater aircraft were produced, lacking internal cannons but otherwise combat-ready. Additionally, Canadair produced 140 aircraft under license for the Royal Canadian Air Force, while CASA in Spain produced 70 aircraft. The F-5A was widely exported under the MAP program to countries including Iran, South Korea, the Philippines, Turkey, Greece, and the Republic of China, while Norway, Spain and Canada purchased/produced the aircraft directly. With the success of the F-5A, the USAF acquired 12 airframes from the MAP program for combat trials in Vietnam, under the code name "Skoshi Tiger" ("Little Tiger"); this led to the F-5's "Tiger" nickname. The Skoshi Tigers received modifications to instruments and the addition of a fueling probe, and were redesignated F-5C.

Later on, the F-5A would lead to more advanced variants. In 1970, Northrop won a competition for a new light export fighter, with a much larger focus on air-to-air combat to counter the threat from late-generation MiG-21s. This aircraft was the F-5E/F, advanced versions of the earlier F-5A/Bs now renamed "Tiger II". The F-5E was similarly widely-exported and modified versions are still in service with export customers, and several aircraft served with NAS Miramar (the so-called TOPGUN) as adversary aircraft, mimicking the MiG-21. Finally, the F-5A's airframe served as the basis of several design studies which culminated in the YF-17 "Cobra", a light fighter that lost the USAF LightWeight Fighter (LWF) competition to the F-16 Fighting Falcon. The YF-17 would later be enlarged into the F/A-18 Hornet, which is operated by the US Navy as a multirole combat aircraft.