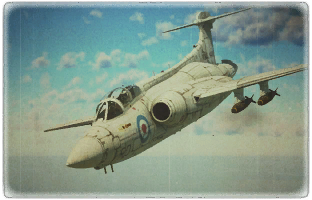 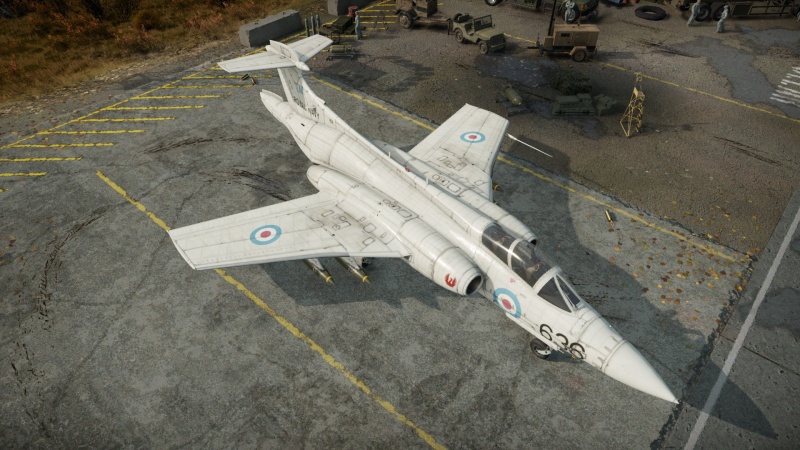 The Buccaneer S.1 is a large target and does not feature any armour plates or bulletproof glass. All of the aircraft's fuel tanks are mounted down the centre of the aircraft in the upper fuselage (above the bomb bay). The engines are fairly small compared to those on other aircraft but are exposed to enemy fire (they are mounted right at the front near the air intakes).

Much like the Buccaneer S.2 the Buccaneer S.1 uses drooping ailerons (the ailerons deflect downwards with the flaps) to produce additional lift. While offering improved flight performance this has a fairly major drawback in terms of survivability in some situations. As the ailerons are considered parts of the flaps if you exceed your flaps' rip speed then the ailerons will likely be ripped off as well, this can easily lead to loss of control in the immediate aftermath of losing your flaps and make the aircraft very hard to control afterwards.

The Buccaneer S.1 can be outfitted with the following ordnance presets:

In Realistic Battles, the Buccaneer's focus is bombing as it has zero air-to-air capability. Be careful on take-off with a full load, use most of the runway and get up to a good 350 km/h IAS before retracting gear and flaps. The aircraft can get up to its top-speed in level flight fully-loaded eventually, howeve,r doing this will often lead to bad results. The best tactic is to gently side climb, get to around 550 km/h IAS and then climb at around 12 degrees keeping IAS above 500 km/h until reaching a position to strike from. Keep a careful eye on the positions of enemies and try and stay a healthy distance from them. Line up with the ground targets Drop into a shallow dive which will quickly increase speeds to ~1000 km/h. Once empty, it's often possible to fly straight back to the airfield and reload. On a return trip, if the friendly team has an advantage, fly straight back towards your target otherwise repeat the above manoeuvres.

Since almost all friendly bombers are going to reach targets first, it's a good idea to guess which targets are still going to be up as to which side to climb on. When picking targets (assuming the use of the loadout with a total of eight 1,000lb bombs), the wing mounted bombs (1000 lb L.D H.E. M.C. Mk.1) are more powerful and will do roughly 25% damage to a base each and drop in pairs whereas the 4 bombs in the bomb bay (1000 lb H.E. M.C. Mk.13) do roughly 20% damage to a base and drop individually. Speed and positioning are the only defence, generally speaking, if you need to get past an enemy plane, it's not a bad idea to go head-to-head and force them to turn hard to get back onto you, this will often drain enough of their speed that you are out of range by the time they come back around. It's also possible to force enemies past in an emergency by making use of air breaks. Otherwise use friendly aircraft to keep fast enemies off you.

The Blackburn Buccaneer was developed in the early stages of the Cold War as a response to new cruisers being built by the Soviet Union at the time. After the first prototype conducted its maiden flight in the late 1950's, it didn't take long for the first production version - the Buccaneer S.1 - to enter service with the Fleet Air Arm in the early 1960's.

In service, the Buccaneer S.1 replaced the outdated Supermarine Scimitar in the naval attack role and served throughout the 1960's. In the early 1970's however, several accidents occurred caused by the Buccaneer S.1's troublesome engines. Following this, all Buccaneer S.1s were grounded and decommissioned, ending their service prematurely. However, the much more reliable Buccaneer S.2 replaced the older variant in service and continued its service for many more years.