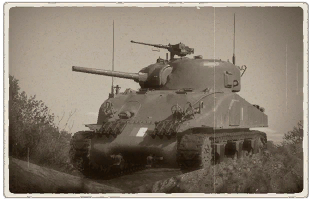 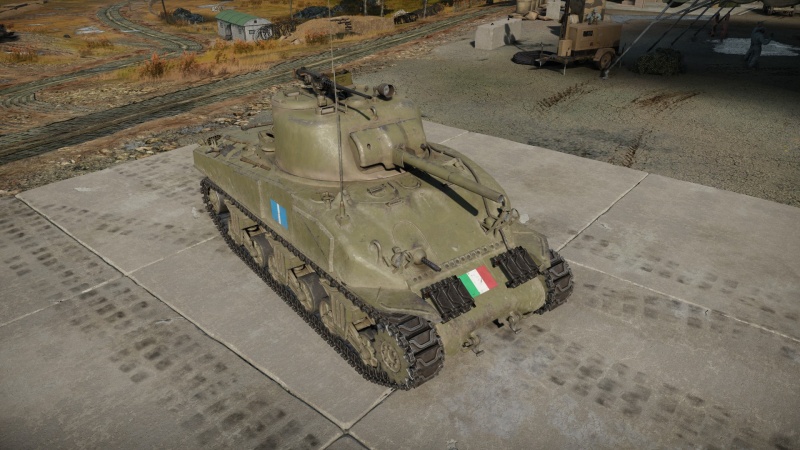 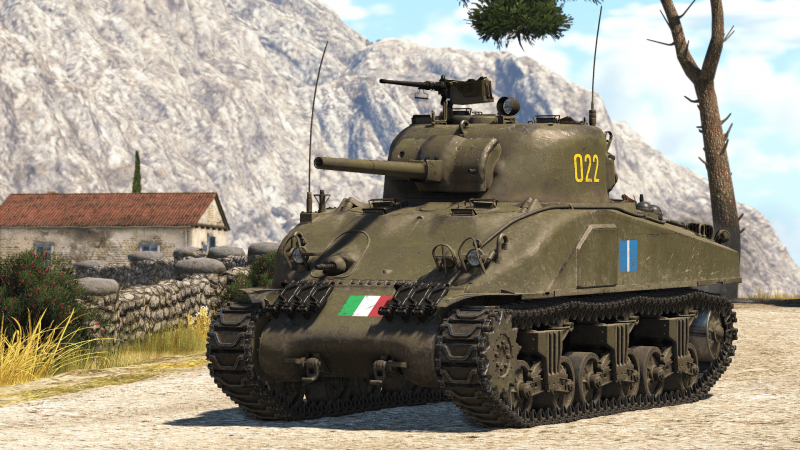 The Carro Medio M4 Hybrid is a premium rank II Italian medium tank with a battle rating of 3.7 (AB/RB/SB). It was introduced in Update "Starfighters".

The hull is very similar to the US M4A1 with a 50.8 mm frontal sloped armour but with a front glacis welded on the rest of the hull instead of a cast one. Protruding viewports and truncated corners interrupt the sloped armour of the glacis and thus are weak spots easy to target for the enemy when up close. The hull sides feature appliqué armour plates covering the ammunition stowage racks. The turret is also very similar but lacks the M4's appliqué armour on the right cheek (gunner side), leaving a small weakened zone in that area. Frontal protection is quite good for its rank and shots from smaller anti-tank guns can generally be shrugged off, particularly when hull down. However more powerful guns such as the Pz.IV F2's long 75 mm can destroy the tank easily, so care should be taken. The side armour is only 38.1 mm thick and can be easily penetrated by just about any anti-tank gun if not angled.

Based on the chassis of the M4A1, the M4 Hybrid (Italy) has the same good all-round mobility: the tank accelerates quickly and is able to reach a maximum speed of 42 km/h in a dozen of seconds. The brakes are powerful and will make the M4 Hybrid skid rather than slow down when driving at maximum speed. The violent braking also causes the hull to wobble, but your vertical stabilizer will fully compensate this effect as soon as your vehicle is slower than 20 km/h. The reverse speed is rather poor: it won't get you out of a dangerous situation quickly enough. The lack of neutral steering makes turning on the spot slow (2 km/h): make sure to build a little speed before turning and you'll turn much faster (11 km/h). Turning in reverse is equally slow (-2 km/h) Turning at full speed doesn't make you lose much speed as your acceleration is good. The offroad mobility is good: the M4 Hybrid (Italy) reaches 19 km/h when fording, 17 km/h when driving uphill with some speed built-up but a mere 10 km/h uphill from a stop start. The tracks are large and grant you a decent mobility on hard (solid ground, roads) and soft terrain (mud, snow, sand). Light and medium obstacles (fences, posts, bushes and small trees) are not a problem but large obstacles will reduce your mobility: avoid them.

When discussing M4 Hybrid (Italy) shells, one always has to account for the fact that it's a medium tank. This means short to medium engagement range, so realistically it can benefit more from its short-range penetration figures than long-range sniping tanks would.

M4A2 / A4 - These Sherman tanks are widely used by over 3 nations that spread across both the Allied and the Axis side, so no matter which nation you play they can be quite tough to destroy in the hands of a skilled tanker. Given the rather weak penetration of your short 75 mm gun, their hull can be almost impossible to penetrate when angled, hull down or 300 m away. For a M4A4, there are 2 apparent bulges on the upper front plate, a penetration through there is a guaranteed kill most of the times. But in case the opponent covers them up or when it's a M4A2, aim for the middle parts of the gun mantlet or the turret armour unprotected by the mantlet, you can at least make them defenseless. Note that their guns are equally weak against you, so wiggle around to disrupt their aim while you reload, you have a good chance of bouncing some shells.

Churchill Mk I, Churchill Mk III - The Churchills, with their complex hulls and sturdy turrets, can be quite hard to kill at range. Again, manoeuvre as close to them as possible, the idea distance being no more than 200 m. If they are angling their hull but facing their turret at you, only go for the turret. For the Mk I Churchills, aim at the near-vertical part of their rounded cheeks to ensure successful penetrations. For the Mk III, also aim for their flat turret which is at most 89 mm. The shell should go in easily and knock out most, if not all of the crew. Only when you are facing their hull without any angles should you shoot the hull, otherwise shoot the turret only, as their big tracks can easily get in front of the frontal hull. The side hull have multiple layers of armour, some of which are weirdly angled and can absorb plenty of shells.

KV-1 (ZiS-5) - A vehicle that the M4 Sherman will have trouble against is the KV-1. While the L-11 is underpowered, the ZiS-5 is potent enough to punch through the Sherman's front, and the Sherman is unable to penetrate the KV-1's thick armour especially with its add-on armour plates. If this heavy tank is encountered frontally, aim at the vertical area on the round gun mantlet as it is only 90 mm thick. You can knock out its gunner this way. Or shoot at the vertical part where the gun mantlet doesn't cover to disable its turret ring and gunner / loader. Note: do not shoot at the frontal hull as it is too thick for the M61 shell. Of course, the best way is to shoot at its sides and rear without any angle, where its armour is unsloped, though it will still have to be at a close range to penetrate the armour. In addition, shots to the sides will most likely hit fuel tanks or ammunition storage, causing a fire or ammunition detonation and at best, time to reassess the situation.

R3 T20 FA-HS (AB / mixed RB) - This speedy wheeled vehicle can circle around you with ease and wipe out all your crew with its fast firing autocannon. In a close encounter, never expose your side to it, and do not even angle your hull. Face your hull directly to the R3, because on each side of the cast hull, above the inducer wheel there is a triangular area that blends and connects the upper front plate to the side. By angling the hull, this triangle becomes unangled to the R3, making it easily penetrated, and the driver / gunner will usually get knocked out first. It is harder for the R3 to penetrate your unangled hull thus giving you more time to react and destroy it.

In America the first M4 Hybrid was built on the 28th Aug of 1943 by the company Chrysler. The tank consisted of a M4 Sherman hull (RHA) welded with a frontal glacis (UFP) of M4A1, basically a mixture of cast and rolled armour. They only modified the hull and the rest was the same. These tanks were sent to Pacific and to Europe theatres where they were used by Allies in that time to fight Germany, Italy and Japan. Later, the tanks would be modified with better guns, leading to various variants showing up around the world. (ex. M4 Tipo IC).

In Italy the Armistice was signed in September 1943, ending the Italian armoured Troops, Italian tanks ended up captured by the enemy (Germany and Italian Social Republic) or they were destroyed. The Italian Armoured Troops were dislocated in Sardegna and Corsica and were not authorized to join the 1° Raggruppamento Motorizzato Italiano, constituted the 28 September 1943 in the area of Puglia, or the Corpo Italiano di Liberazione (C.I.L.) (Italian Liberation Corp) and Gruppi di Combattimento (Fighting Groups) who fought the Axis forces with the Allies from October 1943 to April 1945.

After the war, Italy reconstituted in 1945 and 1946 a minor military command for the territorial defense, the unit was equipped wih Italian, British and American Tanks. For example, America and Great Britain would give Italy many Shermans tank variants for free, which they used extensively post-war, some of the Sherman tanks used were :

These tanks and armoured vehicles were given to Italy, the first official armoured corps for Italy was founded in September 1947 and was reunited in Roma to create the first post-war tankers School. Italian Shermans were used from 1948 until the early 1950s, the last ones being officially put out of service in 1952.