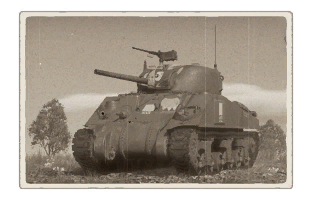 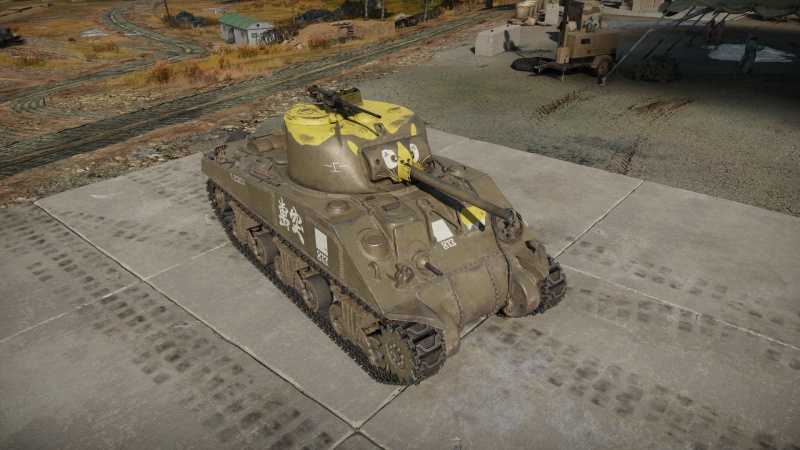 The ␗Medium Tank M4A4 Sherman (1st PTG) is a premium gift rank II Chinese medium tank with a battle rating of 3.7 (AB/RB/SB). It was introduced as a premium pack in Update 1.91 "Night Vision" and was removed from the store after the 2021 May sale. The M4A4 has since been made available for purchase in-game (

) for specific Chinese events like the 2021 "National Day of the People's Republic of China" mini-event. The vehicle is identical to the tech tree M4A4 except for a unique skin and a pintle-mounted heavy machine gun.

Based on the chassis of the M4, the M4A4 (1st PTG) (China) has the same good all-round mobility: the tank accelerates quickly and is able to reach a maximum speed of 44 km/h in a dozen of seconds. The brakes are powerful and will make the M4A4 skid rather than slow down when driving at maximum speed. The violent braking also causes the hull to wobble, making your targeting less accurate. The reverse speed is rather poor: it won't get you out of a dangerous situation quickly enough. The lack of neutral steering makes turning on the spot slow (2 km/h): make sure to build a little speed before turning and you'll turn much faster (11 km/h). Turning in reverse is equally slow (-2 km/h) Turning at full speed doesn't make you lose much speed as your acceleration is good. The offroad mobility is good: the M4A4 (1st PTG) (China) reaches 16 km/h when fording, 17 km/h when driving uphill with some speed built-up but a mere 10 km/h uphill from a stop start. The tracks are large and grant you a decent mobility on hard (solid ground, roads) and soft terrain (mud, snow, sand). Light and medium obstacles (fences, posts, bushes and small trees) are not a problem but large obstacles will reduce your mobility: avoid them.

Another way to play the M4A4 is to tap into its traditional cavalry role, its mobility. The M4 Sherman is a great flanker as it is fast enough to get the jump on the enemy's side. Defeat the enemy at their weak front lines or go around the entire enemy force. Once in position at their sides or rear, ambush them. Ideally, the enemy should be too busy focusing on allies attacking in the front to notice the M4A4 instantly. Take out the weaker light or medium tanks, the 75 mm gun is not very ideal against heavy tanks like the KV-1s and Churchills so take out its friends to allow allies more room to outmanoeuvre them. An organized attack will increase the M4A4 chances on the battlefield and success.

The presence of a pivot-mounted .50 calibre machine gun gives the Sherman some flexibility. It can engage softer targets such as some tank destroyers and many SPAAGs at short ranges when loading a HE shell would be inconvenient. While not ideal, they provide the Sherman tank with some measure of protection against aircraft- sometimes enough to dissuade a pilot from making another pass. It can be an effective rang-finder for targets at longer ranges where the M1919 coaxial would be less effective. While it pales in comparison to the destructive effect of tank guns, it provides the Sherman with some flexibility over other comparable vehicles, who are restricted to their rifle-calibre coaxial machine guns. 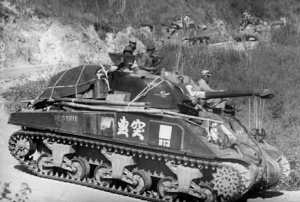 The M4A4 (1st PTG) was one of many M4 medium tanks armed with a 75 mm gun provided by the U.S to China through the lend-Lease program in April 1944. It was part of the 1st Provisional Tank Group, a joint American and Chinese unit formed in the China-Burma-India theatre in 1943, where it fought against the Japanese. It was deactivated in 1945 at the end of war, with the American troops returned to the US and the Chinese troops reformed as a separate unit which saw service in the Chinese Civil War (1946-49), where it was destroyed by Chinese communist forces in 1949. 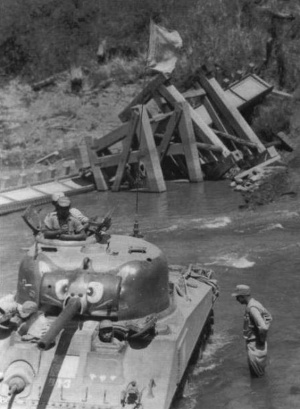