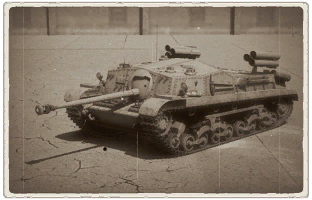 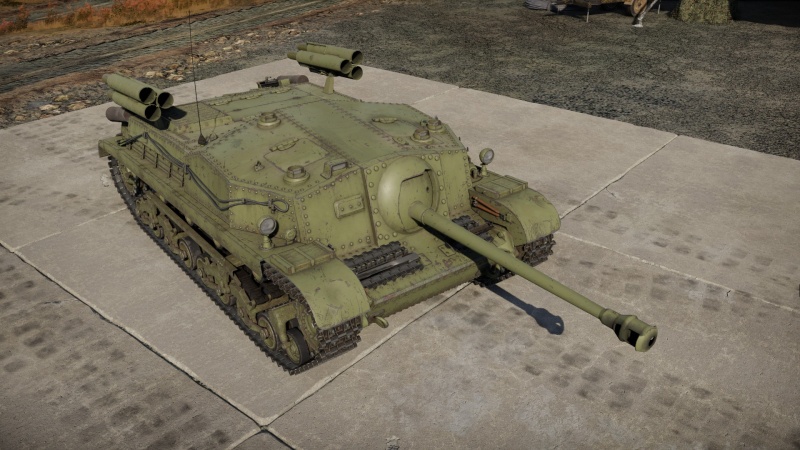 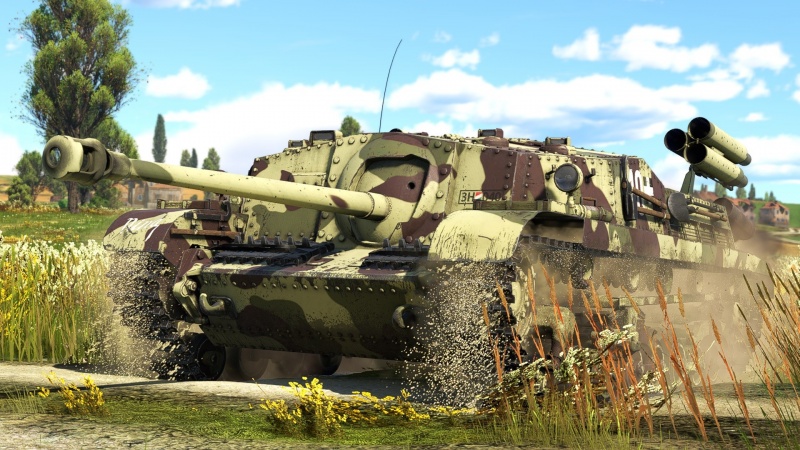 The 44M.Zrinyi I is a premium gift rank III Italian tank destroyer with a battle rating of 4.0 (AB/RB/SB). It was introduced during Update "Danger Zone" as a reward for the 2022 Summer Quest event.

The Zrinyi I has relatively average armour with 75 mm armour on the upper hull front. The hull armour is only angled at 16 degrees, which makes it nearly flat. Like Semovente Italian tank destroyers, it has angled plates between the front and sides which are both 50 mm thick. The 50 mm corner plates make angling very difficult. On the sides it is 25 mm of armour. This is the same armour value on the lower hull.

On the bottom-front, the lower frontal plate is 35 mm, upper frontal plate is 13 mm. Because of the thin UFP, it is possible to use almost any 90 mm HE, or even HEAT, to destroy the SPG with overpressure frontally in a single hit.

The weakest part of the tank would be the sides, so it's suggested to keep them from enemy view. The modules are mostly situated in the back, so they have a lesser chance of being hit and damaged. Like the German StuGs, the Zrinyi has its crew besides the cannon. It has two crew members on each side, which means if you get hit in one side, you will still have two crew members left to man the cannon and drive the tank. The transmission is not in the front to absorb spall and shrapnel like it does on the StuG, making you more vulnerable to hits in that area.

Overall, at its BR, the Zrinyi's armour is not adequate to face enemy fire.

Due to the shape of the hull, it is possible to pull most enemy tanks onto it by ramming them from the front or the back, or clashing in general. Enemy tanks generally cannot escape or retaliate after being pulled up because of the further synergy with the rocket launchers exclusive to the Zrinyi. Enemy hull also becomes exposed to direct fire by the main gun, effectively dooming enemy tanks. The Zrinyi does not suffer blowback from enemy tanks exploding on top of it.

The gun is somewhat inaccurate even with all the upgrades, so it is better to aim dead centre of the enemy tank and not to try hitting any small weakspots. Because of this it will sometimes randomly fail to K/O tanks with tiered armour like the KV-1, even in arcade.

Ammunition is serviceable, as APHE can penetrate heavy tanks rather easily, being slightly better than ammo of StuG III G. It does not have the same insane explosive mass of the 90/53 M41M, so at least some mind should be paid to internal layouts of the tanks.

However, the gun is still reliable enough for most situations and often destroys enemy tanks with one hit. It can destroy any enemy tank it can face, although with some tanks this requires aiming for weak spots. 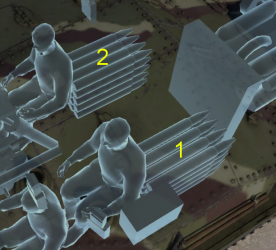 Ammo racks of the Zrinyi I

The rocket launchers are pre-calibrated to fire about 700 m away from the Zrinyi (assuming flat ground and the same terrain level). They only truly respond to controls in Third Person View and only when aiming up. The right launcher fires first, then they alternate. The launchers are offset from each other, so it is necessary to also alternate aim before firing the next rocket by moving the hull while pointing gun sight at the target. Due to the poor aim ability, they are more of a niche trick weapon, than something that can be used all the time.

The only ways to use them at close range is either angling the SPG down to fire semi-directly at about 200 m range, or ram enemy tank to hit its turret or tracks, as they will now be in the crossfire between both launchers.

The rockets deal enough overpressure damage to destroy cannon barrels, annihilate tracks or blow up medium tanks when their roof armour is hit. Some heavy tanks can also be destroyed by it.

In 1942, the Hungarian military started the creation of its own fully armored self-propelled guns, which conceptually repeated the successful German StuG III design. This was done to combat the heavily armoured Soviet tanks encountered on the Eastern Front. The Hungarian engineers also chose the domestic Turán medium tank chassis for their domestic self-propelled guns. A fixed armored cabin was installed instead of a tank turret, and a 105mm howitzer was chosen as a weapon for the first vehicles in the series. To ensure the traverse aiming angles of the gun, the Turán's hull had to be widened by 400mm, however, in terms of the main components, the new self-propelled guns were maximally unified with the vehicle. The first prototype was ready by December 1942, and the first batch of 40 vehicles was ordered even before the SPG passed the entire test cycle. The self-propelled gun received the designation 40/43.M Zrínyi II, in honor of the 16th-century Hungarian national hero Miklós Zrínyi. Somewhat later, serial SPGs received side screens. The vehicle turned out to be very successful and was produced until the surrender of Hungary. However, the 105 mm howitzer of the Zrínyi II was clearly not enough to fight Soviet tanks, so by 1944 a Zrínyi I prototype appeared with a long 75mm domestic anti-tank gun, the 75mm 43.M, which was the same gun mounted on the Turán III prototype. During the tests, the Zrínyi I prototype received launching tubes for rockets. This prototype did not go into serial production due to the devastation of the industrial enterprises and the defeat of the Hungarian army by the advancing forces of the Red Army.[1][2]