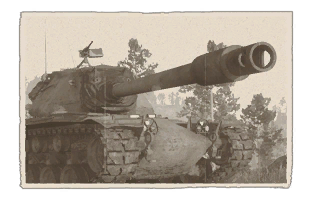 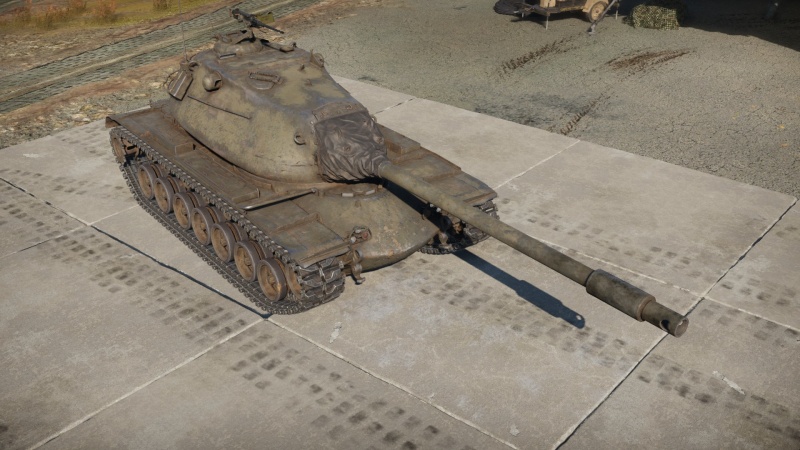 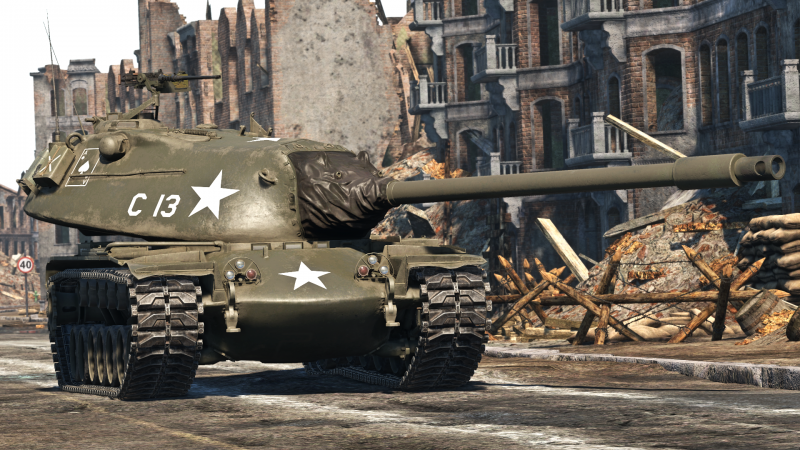 The 120 mm Gun Tank M103 is a rank V American heavy tank with a battle rating of 7.7 (AB/RB/SB). It was one of the first American tanks to be released with the American ground tree in Update 1.45 "Steel Generals". The pinnacle of US heavy armour, armed with a monstrous 120mm gun and a nigh impenetrable gun mantlet, it can become an almost unstoppable foe if played correctly.

Hull armour: After the fantastic T32, the M103's armour situation is generally a letdown. Its side armour is nearly nonexistent, same applying to the rear. The M103's turret size was also increased while reducing the armour down from 152mm to ~85mm average. But all hope is not lost - the M103's armour design did improve. Unlike its predecessor, it features slopes and angles everywhere, making the M103 a difficult target to destroy from the front. It is also reassuring to know that the frontal chassis is no longer a big weak spot; it is relatively minor and can reliably bounce shots right into the armoured gun mantlet.

Turret armour: The M103's turret fares better. It is designed to take on tanks from the front, as the line of sight thickness exceeds 300mm on many occasions and where it doesn't the angle will result in bounces. However, this only works when facing straight at the enemy. Any slight angling miscalculation and the Line of Sight armour becomes useless.

Weak spots: The worst part of the M103 is its true weak spots. As mentioned previously, the upper glacis and lower gun mantlet tend to bounce shots into each other, often with deadly results. Furthermore, the bottom turret cheeks are not as well angled as the rest of the turret (~176mm) and can even be penetrated by the long 88 mm KwK 43. The biggest issue present is the abnormally large turret ring. It is visible all around the tank, and with merely 127 mm of armour it attracts many shots. This, in combination with the "shot trap", presents a very deadly scenario: Either the enemy hits the turret ring and incapacitates the entire crew with one APHE shell, or the shell strikes the mantlet/glacis and still does massive damage to either the driver's compartment or the gun breech. Keep the turret ring hidden. Another small weakness is that the M103's belly armour is only 38.1 mm thick, meaning most high-explosive rounds used by the Rank V tanks, HESH, can be splashed under the M103 and actually penetrate it with the explosion alone.

It comes without question that this tank, whose sole defining aspect is its gun, should rely first on parts to keep the barrel smoking. For the second upgrade, which also unlocks other tier two upgrades, "Turret Drive" is recommended. The M103 has no mobility problems and therefore tracks can generally be neglected. However, its second tier unlocks are very useful. "FPE" is beneficial against the fires caused by the engine, but the 380 mm penetration HEAT shells and "Adjustment of Fire" for better accuracy are nothing to ignore. When choosing upgrades, ask this question: Is the normal APBC shot enough? Would I have benefited from being able to put out a fire? Does better accuracy help me to get more targets? Choose wisely. After all these three modules are researched, there is not a lot left. "Elevation Mechanism" is always nice, same for "Engine" and "Transmission". 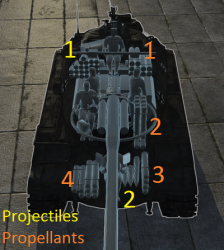 Armed with an extremely large 120 mm cannon, the tank boasts superior firepower rivalling many other Rank V vehicles. One thing must be said from the start: this tank is all about the cannon, a Gun tank. This defines the general play style of the tank in both arcade and realistic mode: it is a sniper with the sole role of making the enemy's life as miserable and short-lived as possible. The cannon can compete against the armour of the Maus.

One thing to note is that the M103's play style is very different from its predecessor T32. Aside from the increase in firepower with the 120 mm cannon, the armour on the M103 is actually slightly weaker than the T32. The M103's gun mantlet is still good with ~300 mm line of sight thickness, but any other spot on the tank is weaker. The tank's upper glacis is, however, a major improvement and mostly a ricochet zone. If impacted, the shells usually travel straight into the turret or gun. Against later Soviet and German tanks, the front of the M103 is vulnerable. Even by using the "hull down" tactic as with the T32, the tank can still be penetrated. However, half-turret down will net better results. The sides, as on most US tanks, are still very thin and vulnerable with no major changes from previous models.

However, the armour of the M103 is not all bad; while it is not thick, the way it angles will deflect many shots. A badly placed shot will easily ricochet, or be swallowed by the line of sight thickness. A head-on engagement is the M103's greatest strength as its frontal armour performs similarly to the IS-3's frontal pike nose. Due to the shape of the hull, it being boat-like, you may bounce some low calibre shells off the lower side of your hull.

With range, the advantages of the M103 increase while its disadvantages recede. It is, therefore, the perfect tank for large, open maps like Mozdok and Kursk, where flanking tanks can easily be spotted and dealt with

The M103 is best played at medium to long range, making use of its 120 mm cannon to devastate enemies at a long distance. The vehicle's armour is more about slope than actual thickness, so the long distance also helps to mitigate the M103's rather large armour gaps. The tank also has good gun depression, so making use of hills is advised wherever possible. If on a city map, and have no long-range opportunities, stay close to teammates and move up only as warranted. The 120 mm has a fairly long reload, and in close quarters, can get the M103 destroyed during the downtime. As such, keep a back-up plan an escape route handy, as a missed, bounced, or non-lethal shot can leave the M103 exposed to enemy return fire.

The M103 also comes with a smoke round in case it's needed, but unless it's used to cover a pre-engagement advance, it's best to keep it in reserve only. The long reload of the gun can make loading a smoke round a fatal error, should the M103 get caught mid-reload, or worse, have to cease a reload halfway through to load a more suitable round.

The M103 tank was designed to counter the Soviet heavy tanks being produced at the time, namely the IS-3 and the T-10M heavy tanks, which prove rather impervious to Western tank designs such as the M26 Pershing and Centurion. The problem facing the designers at the time was to produce a versatile tank system capable of engaging heavy tanks like the IS-3 and fortifications.

The result of the request for such of a vehicle was the experimental T34 heavy tank, which was a variant of the then-experimental T29 Heavy tank except mounting the much larger 120 mm T53 cannon rather than a 105 mm T5E2 cannon. Further development began on this tank in 1948, where multiple changes were made to the design to fit a more versatile tank system. The end result was the now named T43 Heavy Tank, which began to see the doubt in its success as the Korean War was undergoing at the time that placed the M26 Pershing back in the spotlight. The T43 managed to survive due to an order request of 80 units by the Army to reinforce their depleted armoured forces. The USMC even sought a replacement that could serve for a long period of time and ordered 220 of the vehicle in 1951. Changes were made to the armour protection and the gun was updated to the newer 120 mm T123E1 cannon. After being sent to Aberdeen Proving Ground and approved, it was accepted under the T43E1 designation.

The 120 mm T123E1 cannon (adopted as the M58 gun) was a very large cannon, and the ammo could penetrate about 340 mm of armour up to 1,000 yards. However, the ammo's large size restricted the number that could be held in the tank turret and hull. The design also had a 7.62 mm machine gun and a .50 cal machine gun could be installed on the turret to provide anti-aircraft and anti-personnel fire. The heavy weight of the design at 59 tons caused the Continental AV1790 engine to be insufficient in propelling the tank. Thus, the tank's speed was only about 34 km/h (21 mph). Despite the weight, it was still 10 tons lighter than its predecessors and retained about the same armour protection ratings. The production of the T43E1 tank was designated as the M103 tank and was produced at Chrysler Newark for a total of 300 units produced.

The M103 was fielded in Europe in only one battalion in January 1958. The 889th Tank Battalion (later as the 2nd Battalion, 33rd Armor Regiment) was organized to four companies of six platoons each. Each platoon had three M103 heavy tanks for eighteen tanks per company. The United States Marine Corps had one M103 company of about seventeen tanks assigned to each of its three Marine tank battalions in regulars and reserves.

The M103 never saw combat during its service life from 1957 to 1974 and the US Heavy Tank Battalions began to be deactivated around 1963 with the arrival of the M60 Main Battle Tank, which proved to be much better in the long terms compared to the M103. The Marines kept their M103s until they began receiving the M60 tanks to replace them. The removal of the heavy tank units in the US military was the time of turnover from the traditional classification of weight between a tank to the new concept of "main battle tanks" and "airborne vehicles". These ushers in the new age of main battle tanks that can serve in a multi-purpose role against armour and fortifications, starting in the M60 tank, then in its successor the M1 Abrams. The M1 Abrams, while having the same calibre as the M103, was much more powerful due to its new ammunition types and design, and was a statement on the advancement of technology that came in about thirty years difference between the two tank designs.

Today, only a few M103 samples are left intact around America in various bases and museums.