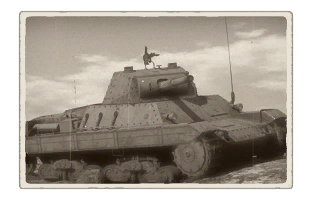 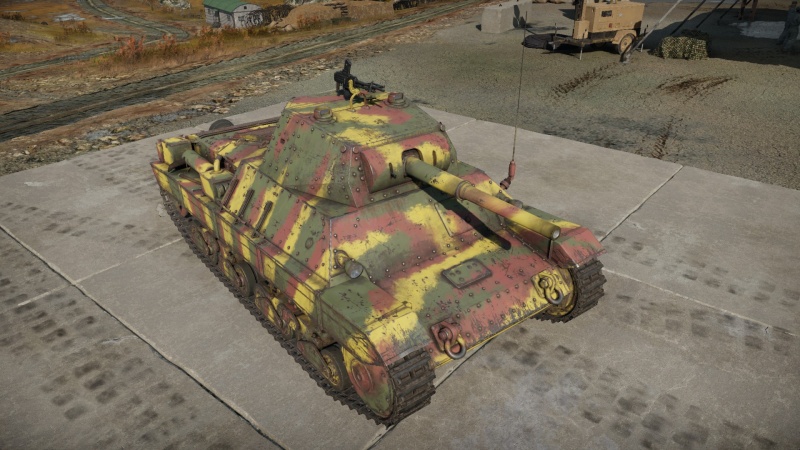 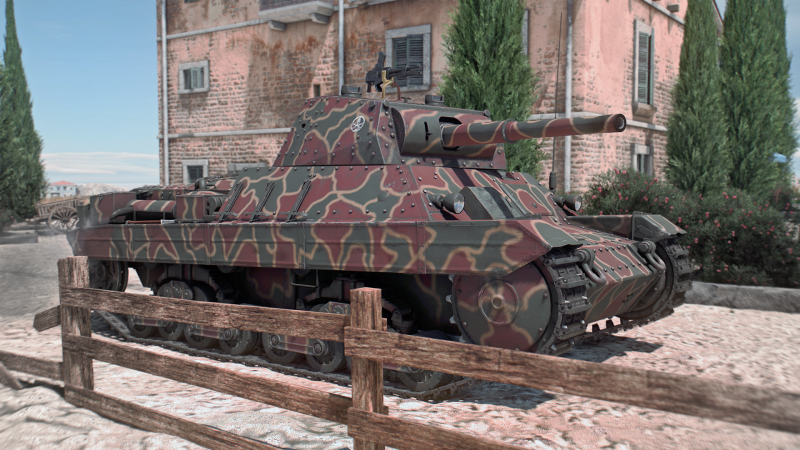 The Fiat-Ansaldo P40 Gruppo Corazzato "Leoncello" is a gift rank II Italian medium tank with a battle rating of 3.3 (AB/RB/SB). It was introduced as a premium pack in Update 1.73 "Vive la France" and was removed from the store after 2020 May sale. It was made available briefly for purchase with Golden Eagles

The P40 "Leoncello" was one of the first Italian ground vehicles implemented and was created by Nicola "Kolin0" Faggiani and Riccardo "BlueBeta" Lo Verso as part of the revenue share program.

The P40's best description in its place on the battlefield is "average". Average armour, average gun, and average mobility. For this reason, it can perform most roles of a typical medium tank in a flanking or support role, but should not be relied on to be a shield or a speedster. The P40 features a default tri-tone camouflage of yellow, green, and red-brown; colors not too unlike that of late German tanks. 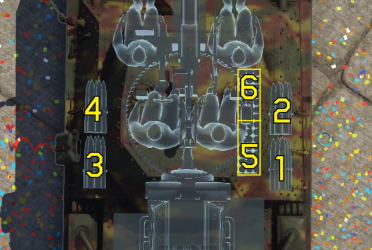 The P40 can be played like other medium tanks like the Panzer IV in that the mobility should be used to try and get a position of opportunity against the enemy. Though the 75 mm APCBC is generally inadequate in a frontal engagement, the usage of the HEAT round could level the disparity in armour and firepower. As a support, stick together with allies during an assault or defence of a base. The P40 is still a vital piece as a team player and can attract the enemy's attention either as an easy target or a threat with the 75 mm gun. Allow the enemy tanks to try and take attention of the P40 or another ally and while the lone enemy is targeting one, the others move in to hit the enemy. Coordinate effectively to control choke points against the enemy movements.

The P40 is quite good at flanking too, it has quite decent forward mobility and this can be used to get to areas around the main points of contention to get to the enemy's sides. This would be beneficial as the P40's 75 mm APCBC ammunition can do its work in piercing the weaker armour on the sides and use the huge explosive filler in each round for a crippling effect on the penetrated enemy tank. Take cover behind concealment and lob rounds at the enemy as they move to engage the bulk of the allies in the expected fighting zones. Take care not to get hit and angle the tank to make the most of the front sloping 50 mm of armour on the front, most enemy rounds that come your way with high explosive fillers will usually take you out in one shot. Try your best to stick with teammates who can back you up when you find yourself in trouble, this will increase your chances at survival. This also should apply for all game modes, be aware that in Arcade battles the enemies are able to see your weak spots when they aim at you, so keep that in mind if you decide to go hull-down as an experienced player might just go for a different module, such as your cannon barrel or breech, and finish you off slowly.

The story of the P40 tank began in the 1940s, the Italian high command, under order of leader Benito Mussolini, would bring out a set of requirements for an entirely new tank that could work with existing vehicles that were already in service. The recent Africa campaign had shown the massive problems the Italian tanks in production had, namely a lack of armour and insufficient firepower, prompting the army to make some changes. Ansaldo, assisted by Fiat, would design the tank. During development, there were some disagreements between the engineers and high command, high command wanted a diesel powerplant, while the builders favoured a petrol engine. However, neither of those engines were available at the time that could produce the desired output for the tank. Thus, a new engine had to be designed from scratch, this would be a major setback as development would be quite slow. Even when the new engine was made, they decided to go with the V-12 SPA 342 diesel engine, which produced 330 hp and allowed the P40 to reach speeds of up to 40 km/h.

It was initially designated as "P75" due to the 75 mm short-barreled 75/32 mm cannon that was changed to a longer barreled 75/34 with higher potency. The vehicle was adopted and was named "P26/40", with the designation "P" standing for "Pesante", 26 for the weight, and 40 for the year it was designed. A lot of design features of the tank would be inspired from captured Soviet T-34s that Italy managed to inspect and even use against the Soviets during the war. Due to this, the first 3 prototypes would be very different from one another, such as having different cannons or different types of armour layout. Eventually the development for this tank was taking to long so they decided to just go ahead with the production as they were wasting too much time, and the Allies were on their way to Italy. The P26/40 was, by Italian standards, a heavy tank.

It would finally enter service in 1943, very few would enter service in the Italian army, mainly due to the armistice on the 8th September 1943, Nazi Germany would basically take over the production line and capture the majority of the Italian P40s and put them in service with the Wehrmacht.

As for the P40 "G.C. Leoncello", its story would commence straight after the armistice, unlike what others may lead you to believe, not all of Italy "switched sides", many in Northern Italy remained loyal to Mussolini and the Germans, and weren't simply going to accept the terms of the armistice, this lead to a civil war. The Leoncello Armoured Group was born on the idea of ​​Captain Zuccaro, he had the task of defending the Ministry of the Armed Forces at Peloponazze, near Desenzano. Captain Zuccaro began to organize the Group without the Germans' knowledge, under the cover name of "Battaglione Carri dell'Autodrappello Ministeriale delle Forze Armate", looking for and recovering armoured vehicles to re-equip themselves. Of those vehicles, they'd manage to find two P40 tanks, which would promptly be put into service. They'd also get a very unique camouflage pattern, with a mix of yellow, green, and red, history on their service is quite scarce to find, but it is believed by many that they did get involved in a few battles. Today, two Carro Pesante P26/40 still exist: one of them is in the Museo della Motorizzazione in Rome, while the other one is in display near Italian Army barracks in Lecce.