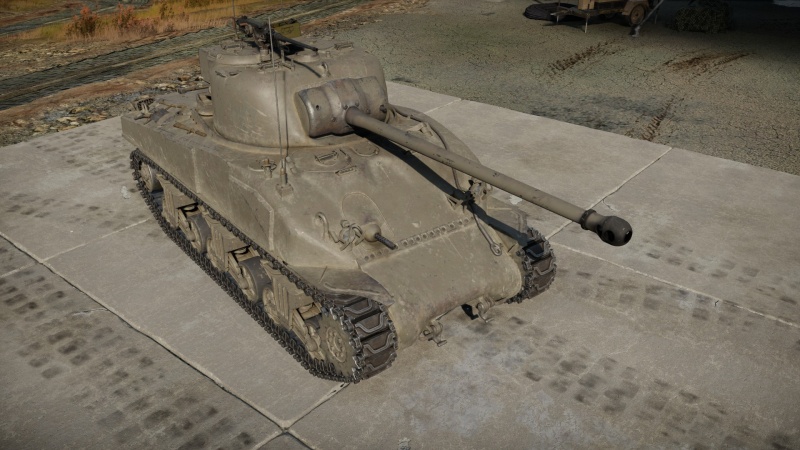 The M4 Tipo IC Composito is a rank III Italian medium tank with a battle rating of 4.7 (AB/RB/SB). It was introduced in Update 1.85 "Supersonic". Composito translates to "composite", as this is a Firefly variant built on the Sherman I Hybrid (or M4 Composite) hull.

The M4 Tipo IC has survivability similar to that of the American M4A1 Sherman. The armour is not strong for the battle rating and most enemies, save for SPAA, will go right through the front. If the tank is penetrated it is likely that at least two of the five crew will survive, depending on where the shot hits and how much HE filler it has. The gun breech is quite large, and it can often save the crew members on one side from the shrapnel of a penetration to the other side of the turret. Additionally, almost all the ammunition is stored in the hull floor, while a minority is stored in the turret basket; this means it is unlikely for the ammunition to explode under most circumstances. Despite these factors, almost every penetration will cause crippling damage - either immobilizing the tank or disabling the main gun, which allows the enemy to take a second finishing shot soon after. In summary, the survivability of the M4 Tipo IC is not to be relied upon as it will rarely survive two shots and will almost never bounce a shot. As such, you should plan your route in order to avoid frontal engagements with the enemy.

The small calibre of the L3A1 machine gun makes it largely ineffective against all armoured vehicles but the ones with an open compartment. It still can be used to ping targets as a rangefinding help or to mow down minor obstacles blocking your line of sight. A second hull-mounted .30 cal machine gun is modeled but not usable.

The M4 Tipo IC is almost identical to the British Sherman Firefly, with minor cosmetic differences, an additional crew member, and a weaker overall gun mantlet. The player can be confidently rely on the mighty 17-pounder gun to effectively neutralize other tanks regardless of the angles (including the frontal armour of the Tiger or the T-34s). It excels at sniping from a distance and can also can spearhead an attack if needed.

This speedy wheeled vehicle can circle around you with ease and wipe out all your crew with its fast firing autocannon. In a close encounter, never expose your side to it, and do not even angle your hull. Face your hull directly to the R3, because on each side of the cast hull, above the inducer wheel there is a triangular area that blends and connects the upper front plate to the side. By angling the hull, this triangle becomes unangled to the R3, making it easily penetrated, and the driver / gunner will usually get knocked out first. It is harder for the R3 to penetrate your unangled hull thus giving you more time to react and destroy it. 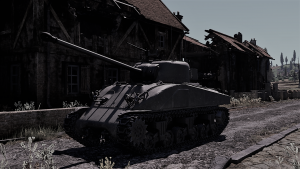 Impression of an M4 Tipo IC on parade

The Firefly first saw action in Italy in British, American, and Polish hands in the Italian Campaign in 1944, but were ceased since heavy German armour proved to be a challenging opponent for the Firefly. After WW2, Italy was supplied with tanks by the US and UK, such as the Sherman Firefly (designated as M4 Tipo IC or M4 Tipo VC depending on the variant) and M24 Chaffee, which were commissioned in 1947. At that time, Italy created the first nucleus for the formation of a tankers school and on the 1st of October officially formed the Military School Organization.

The M4 Tipo ICs were decommissioned and scrapped in 1952.