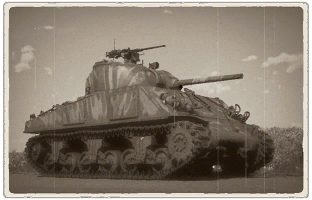 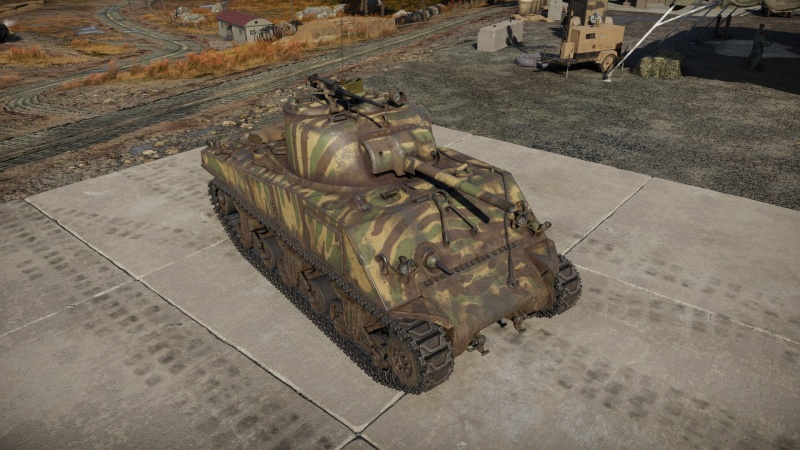 The ▀Pz.Kpfw. M4 748 (a) is a premium gift rank III German medium tank with a battle rating of 4.0 (AB/RB/SB). It was available only for pre-order during the Closed Beta Test of Ground Forces during the period before Update 1.41. 500 units were also for sale during the 5th Anniversary event, which sold out within a few hours. Another 2,020 units went on sale in commemoration of the 30th anniversary of German Unity, also selling out in a few hours. It represents a captured M4A2 Sherman in Wehrmacht service and was the first Sherman to be implemented in the game. Unfortunately, it is currently impossible for a new War Thunder player to acquire this rare tank.

The M4 748 (a) plays like any other M4 Sherman as a mobile tank with adequate armour and gun. While its frontal armour and gun may not be up for the tasks against its contemporaries at its battle rating, the M4's mobility allows the M4 to get around the front line to capture the objective or hit the enemy in the sides. Though, if the heavy manoeuvring is not preferable, the M4 can also perform well as a supporting tank by backing up a more powerful tank to overwhelm a small enemy group.

Visually, the M4 748 (a) is identical to the M4A2 Sherman. The only big distinctive feature of the M4 748 (a) is the paint coat on the tank, which is a combination of the yellow dunkelgelb, red-brown rotbraun, and green olivgrün, in a manner similar to the default scheme of the Panther G.

Features on the M4 748 (a) are shared with its counterpart with a 47° front armour plate with a one-piece transmission housing. The turret features the M34A1 gun mount with the 75 mm M3 gun, the mount specified for a telescopic and periscopic scope. Unlike the M4 Sherman model that has the same gun mount, the right turret side does not have a welded piece of applique armour, allowing for a more sloped contour on the 76 mm turret armour. The turret top features a spotlight on the front loader's position with his oval hatch while the commander has a usual split hatch with an M2 Browning machine gun for him to use.

The M4 748 (a) is a very versatile weapons platform that can be used in multiple roles and tactics. It can use its decent armour and gun to support friendlies against enemies, use its mobility to outmanoeuvre and exploit undefended location to reach an unsuspecting area, and a combination of the traits to deal with its contemporary medium tanks with the 75 mm gun with its APCBC and APCR ammunition.

While most tanks in the BR range of the M4 748 (a) are quite capable of destroying the tank through the front, the most worrisome tanks are those that are quite immune to the 75 mm gun on the M4. APCR ammunition is given to the 75 mm gun, but its poor slope characteristics still make it situational ammunition than a universal tank annihilator. As such, exploiting side armour and general weak points of opposing tanks are still a must.

The M4 748 (a) tank's mobility can be used to travel the distance on the battlefield in a satisfactory fashion. As the M4 748 (a) cannot stand against the more heavily armoured and armed enemies at the higher BR range, a manoeuvre around the enemy force or in a location prime for an ambush location can allow the M4 Sherman to damage or destroy enemy tanks. The engine power allows the M4 to travel across rough terrain to get to its destination. The only drawback in this action would be an unexpected encounter with another enemy trying the same manoeuvre, which would be an enemy tank class of equal to the M4 or lower so a good engagement against them could let the M4 continue its merry way.

There are many instances on a War Thunder battlefield where two opposing tanks face off against each other on a corner of cover, waiting for the other to pop out so it can deal a crippling blow with its gun or waiting for the other to prematurely fire so it can advance unhindered to a prime firing location. The M4 748 (a) can alleviate this problem by giving the friendly tank additional support. In this scenario, go around the enemy through another angle while the teammate keeps the enemy busy. This way, the M4 can go around and prepare itself for a firing solution on the enemy tank. This will either end with 1) a successful out-manoeuvre and the M4 landing a shot on the enemy's side and weak point while it was preoccupied with the ally, or 2) the tank is forced to turn its attention to the M4, leaving allies able to advance and do the same to get on the enemy's side.

While not as fast as some of the lighter tanks at the BR, the M4 748 (a)'s upgraded mobility makes it usable as a vehicle to run towards the objective and capture the zone. It has the decent firepower and armour to handle enemy light tanks that are expected to also rush towards points, and so it could last for some time capturing and defending the zones. However, once heavier tanks and contemporary medium tanks start arriving in droves, it is recommended to start withdrawing from the position or else the M4 will be overwhelmed and destroyed at the first priority due to being an easy target, even if allies are present to support the M4 on the position.

The American M4A2 medium tank is a variant of the M4 with a diesel engine. In April 1942, the first M4A2 prototype was tested, and the tank was put into production. The tank had a welded hull. A low-speed diesel engine gave the M4A2 good cross-country ability and a much larger maximum range than tanks with gasoline engines.

A total of 8053 of these tanks were built. About 2,000 of them were delivered to the Soviet Union under the Lend-Lease program.

This vehicle was actively used in combat operations on the Eastern Front. Sometimes, entire tank battalions were made up of this tank.

Captured serviceable tanks were used by the Wehrmacht as subdivision command vehicles and sometimes even full-fledged combat vehicles. Captured M4A2 tanks served with the self-propelled artillery regiment of the 14th Armored Division of the Wehrmacht and with the 15th Parachute Division of the Luftwaffe. Most of the tanks were marked with an Iron Cross to show they belonged to the German army. Some tanks were repainted to match the standard camouflage schemes of the German army. The armour protection of these tanks was often supplemented with spare treads.

Captured M4-748 (a) tanks were used by German troops until the end of the war. The divisions of the Wehrmacht had several such tanks which survived until Germany surrendered.