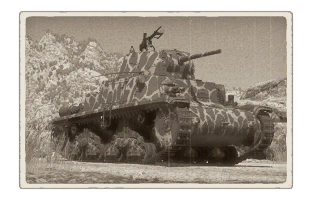 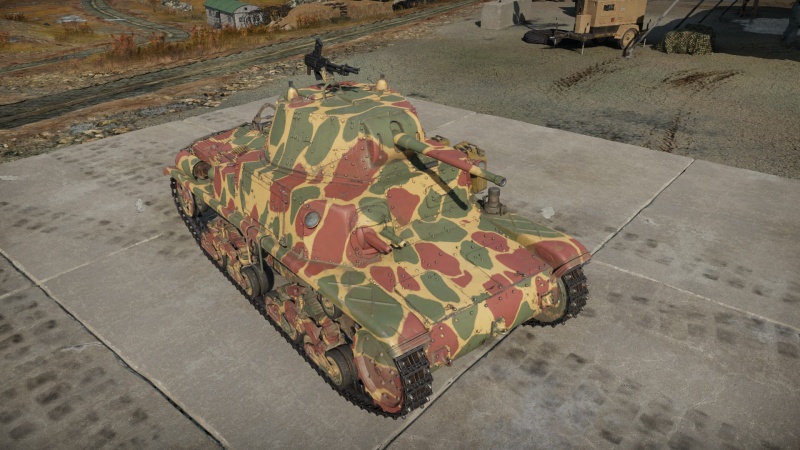 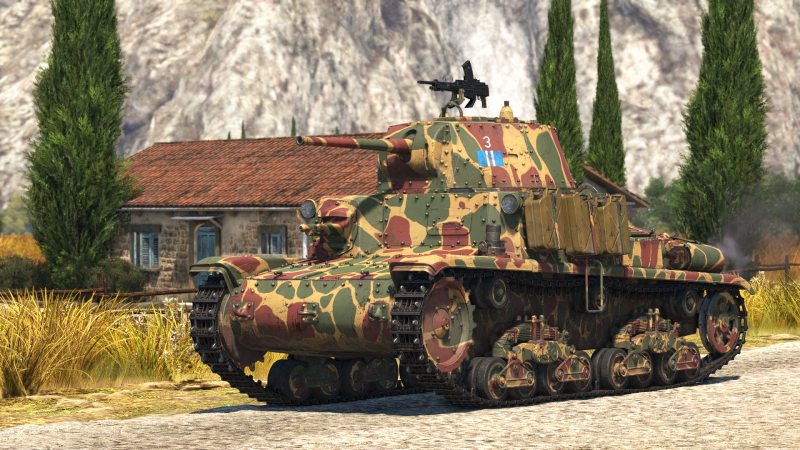 The Fiat-Ansaldo M15/42 is a rank II Italian medium tank with a battle rating of 2.7 (AB/RB/SB). It was introduced in Update 1.85 "Supersonic". The M15/42 is the last tank before getting to the P40 and foreign medium tanks and is the final version of the Carro Armato, thus giving some notable improvements over the previous models.

The turret is only 25 mm at the side, but due to the roundness and the slope of the armour at the front of the tank, it has an effective thickness of ~70 mm which can bounce poorly aimed shots. The mantlet has two layers of armour stacked on top of each other, giving an effective thickness of 75 mm, however, it has a shot trap on the left side which only has a thickness between 29 mm and 49 mm however due to the low battle rating, most new players won't know to shoot there. Despite the shot trap, the combination of good, sloped and rounded turret armour can make the M15/42 effective at hull-down positions.

The top of the hull has decent protection in the form of a 50 mm frontal plate and a ludicrously sloped (80°) 20 mm plate which has an effective thickness of ~75 mm. However, the lower glacis plate only has a thickness of 30 mm and is directly in front of the transmission, so shots there will cripple the tank's mobility and possible result in its destruction.

The M15/42 is not a shining star on the battlefield, however, when it comes to mobility, this medium tank can get around. While being understandably significantly slower than most light tanks encountered at this battle rating, it can hold its own over most terrain as a medium tank, sacrificing armour for mobility.

The 47/40 mod.38 cannon is quite the powerhouse at this rank, especially due to the effective shells at its disposal. The mod.39 shell has a decent muzzle velocity of 755 m/s, good post-penetration damage and adequate penetration at close ranges. However, it quickly loses effectiveness at longer ranges. This encourages the player to fight in the mid-range area, almost always in a hull-down position.

The shells available for the M15/42 are limited: 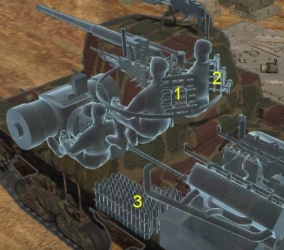 The small calibre of the Breda Mod. 38 machine gun makes it largely ineffective against all armoured vehicles but the ones with an open compartment. It still can be used to ping targets as a rangefinding help or to mow down minor obstacles blocking your line of sight. The pintle-mounted MG can not pivot independently from the turret. Two additional hull-mounted Breda machine guns are modeled but not usable.

The M15/42 is basically a M14/41 tank boasting a better gun, a more powerful engine and thus sitting at a higher battle rating. With the BR increase, the competition gets also tougher. That's why the M15/42 features henceforth average armour for its rank, especially the sides and around the turret. Frontally, the massive 50 mm front plate is the biggest weak spot: flat, hard to miss and a penetrating shot through this plate will kill the driver and the gunner that sits behind him. To avoid this, you can angle your tank about 30 degrees to the left to hide your flat plate and present instead the MG bulge that could absorb some shots. This however is not a durable strategy, any expert tanker won't fall for that trick.

The M15/42's top speed of 38 km/h limits its opportunities as a flanker. Its flat armour also limits its capacity to advance exposed in the open and its rather slow turret rotation prevents it from reacting quickly to 360° threats as a frontline tank. Its solid 47 mm gun on the other hand coupled with 15 degrees of gun depression makes the M15/42 a good support tank. Stay behind cover at a distance (500 to 700 m) from the frontline to support spearheading tanks, this will also increase your armour advantage. On top of that, the M15/42 sports with a crew of 4 (and 1 spare) a longer durability than most tanks at its BR. When being focused on the action, it is imperative to always check for 2 main threats: flanking enemies who could reach you quickly from the frontline and tank destroyers with a high penetration power lurking at a safe distance. If you're flanked, your turret doesn't turn all too fast: rotate your hull instead. Pivot turning in the M15/42 will always be faster than turning your turret. If you spot a tank destroyer aligned on your position, retreat or get behind cover.

Germany confiscated 92 on Italy's surrender and produced another 28 themselves. Some were turned over to Italian forces. While most remained in Italy, some were also employed by the German forces in Hungary.