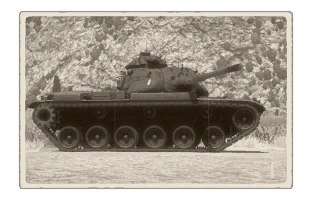 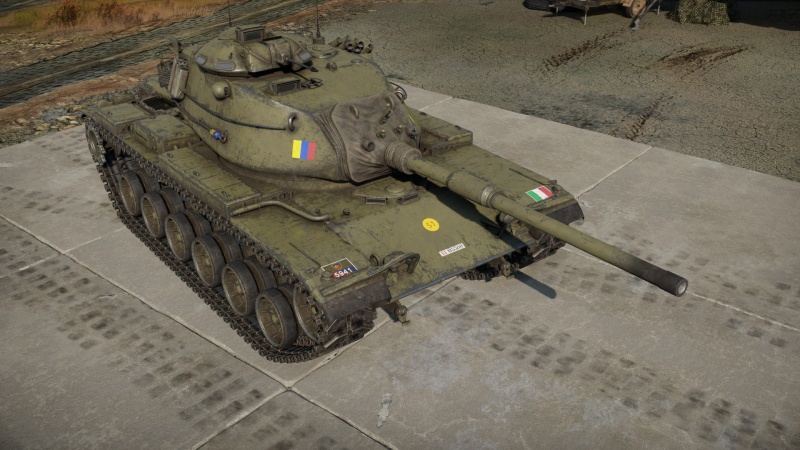 The M60A1 132ª Divisione corazzata "Ariete" is a premium rank V Italian medium tank with a battle rating of 7.7 (AB/RB/SB). It was introduced in Update 1.85 "Supersonic" as a purchasable pack and was removed from sale in Update 1.87 "Locked On". It was later re-released as a premium purchasable for Golden Eagles 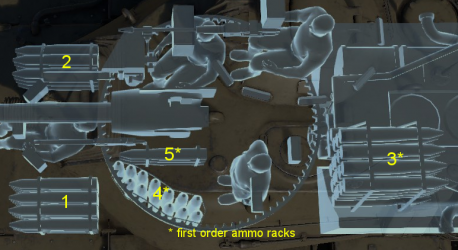 Just like other M60s, you might not want to head-on with your opponents. Instead, flank around and attack from the side. While having better armour than other medium tanks at this BR, it is not thick enough to block incoming shells like a heavy tank. The heavier armour will sometimes save your life but do not rely on it. You might want to use appropriate camouflage and camouflage decorations to avoid enemy detection due to the unique shape and high recognisability.

The mobility of the M60 is nothing special from the tech tree family. You don't have the mobility like a Leopard due to the trade-off of much better armour. The mobility is good enough to perform flanking and transfer to a better attack position. Get to an ideal attack position and be patient. You will get your reward.

M60A1 "D.C.Ariete" has four different shells, M728 APDS shell, M393A2 HESH shell, M456 HEAT-FS shell and M416 Smoke shell. Compared to its American predecessor M60, the Italian version replaces the M392A2 shell with the M728 shell. Compared to M392, M728 has worse 90° penetration but has superior angled penetration. This characteristic makes the M728 shell perform better when against angled armoured targets. You should use M728 against most medium and heavy armoured targets and switch to M456 only when dealing with lightly armoured targets and heavily armoured targets that M728 is not able to penetrate. The smoke shell is like any other smoke shell, but as the tank has access to smoke grenades, it is not as useful, though can still be used when the smoke grenades are expended or to annoy enemy tanks.

The M60 is a second-generation main battle tank made by the USA. It is the fourth and last generation of the Patton family and replaced the M48. It officially entered service in 1962, the first user being none other than the US Army. The story of the Italian M60 begins during the late stages of the Cold War. During the early sixties, the Italian army's tank arsenal did not appear up to standard, mainly due to having to entirely rely on America and other allies for military equipment, due to some laws surrounding the production of military arms. In fact, hundreds of tanks dating back to the Second World War were still being actively used in nearly all frontline units. Some of these units would include vehicles such as the M4 Sherman, M24 Chaffee, M36 Jackson, M10 Wolverine and the M26 Pershing. These tanks were now completely obsolete in the modern warfare setting; the leading vehicles of the Warsaw Pact, such as the T-54 and T-55, had already surpassed them in nearly every way. Thus the Italian Army Staff (SME) therefore deemed it necessary to improve the operational capability of the national tank component by following two lines of action. The first one was to continue the introduction of M47s from other NATO armies, which had usually been obtained at very favourable prices, even despite having to entirely rely on foreign countries. The other line of action was to keep on introducing newer vehicles at a modest rate, with modern performance and the ability to compete with the best and latest main battle tanks coming out of the Warsaw Pact. In general, there was a need for a more powerful MBT, that even the M47, one of the most powerful tanks they had at the time, couldn't be on par with. The M47, in fact, although being appreciated by its users for its sturdiness, ease of use, decent mobility and enough firepower to deal with most modern tanks at the time, it sadly did not fully satisfy the requirements of the "Ariete" and "Centauro" divisions. This meant that something had to be done, and had to be done fast.

During that period of time, Italy did not actually end up having much choice to pick from. Choices would be restricted to the US M60, the British 37t Chieftain and Vickers, and the so-called "standard" tanks at the time would still be under heavy development in France and West Germany, which would come out with AMX-30 and the Leopard 1 MBTs. The British solution was absolutely not favoured, as the Italian high command deemed the tanks to be too slow and heavy for the Italian operational environment and generally didn't go hand in hand with the Italian doctrine at the time. In addition, they also evaluated the lifespan and potential upgrades that could be done at a later date to keep the tanks in service for as long as possible, and the only one to really yield positive results would end up being the American M60.

After a long evaluation test period, and training with the machine to familiarize the future users of the vehicle, the Italian army would possess 200 M60A1s by the 1970s, license-produced by OTO Melara in Italy, and an additional 100 from excess USA-EUR stocks. The M60 in Italian service was used by several armoured divisions, including the Armored Division Ariete, 32nd Armored Brigade Mameli, 60th Armored Battalion Pinerolo, 20th Tank Battalion Pentimalli, 8th Tank Battalion Secchiaroli, and 10th Tank Battalion Bruno. They would widely be used in a lot of theatres of war in which Italy was involved, such as Lebanon in Operation LIBANO 1 and LIBANO 2, and more famously they also partook in the Somalia intervention where M60 tanks would be used on the frontlines of the conflict. Eventually, even the M60 would be gradually phased out with the end of the Cold War, not only because multiple countries had started to work on more advanced vehicles, but also because a lot of militaries at the time had started to quickly downsize their stockpile of tanks as the threat of a Soviet invasion no longer loomed. It would be completely replaced by C1 Arietes by the 2000s, however, in 2017, Leonardo, an Italian defence company, had presented an upgrade to the M60 tank known as the Leonardo M60A3 upgrade, which heavily modernized the M60 tank, to make it suitable for the modern setting. This was primarily done to allow countries who still used the M60 tank to receive an upgrade which would extend the life of the M60 even longer, by upgrading key aspects of the tank that made it unsuitable for the current setting. Such changes included a new engine, a new 120 mm cannon, thermal imaging devices and improved armour.