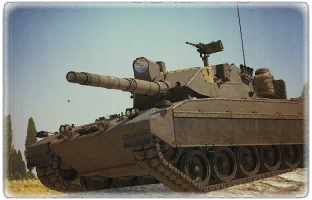 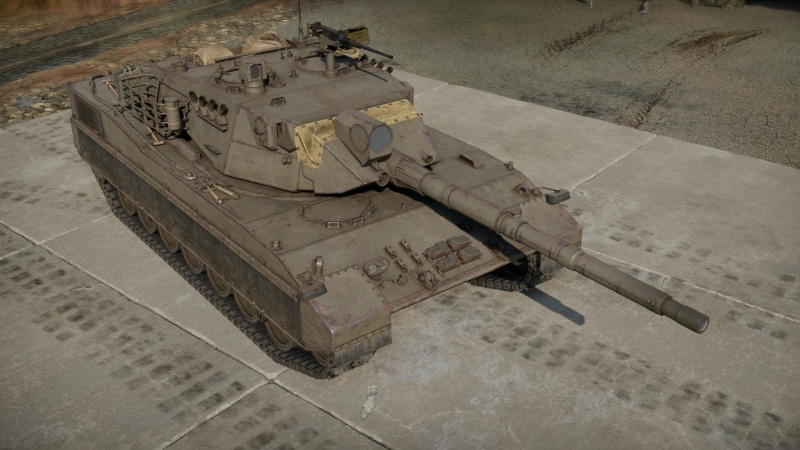 The protection of the OF-40 Mk.2A is not terrible, but it can't be relied upon. The protection is very similar to that of the German Leopard 1 tanks, due to the fact that the OF-40 was developed using the Leopard 1 as a basis. The hull and turret armour is very light, only being able to protect against HESH from the front, with HEAT and post-war armour piercing rounds such as APDS and APFSDS going right through. Due to the high number of angles, bounces can occur, but it can not be relied upon. On the other hand, low-calibre autocannons and all machine guns will not be able to penetrate from the front, and most (if not all) machine guns will not be able to penetrate the sides.

The driver, gunner, and commander are lined up in a row on the right side of the tank, allowing a potential knock-out if being shot at from the front; the tank will be able to keep fighting even if it loses two crewmembers since it starts with four. Additionally, unless the driver carries 20 rounds or less, the hull ammo rack next to the driver will be partially or completely full, depending on the amount. That means a shot coming from the front has a high chance of hitting and detonating ammunition.

Conclusion: This tank has a very conventional layout and has survivability similar to many other western tank designs from the Cold War, especially the Leopard 1. The best way to prevent this tank's destruction is to avoid enemy fire in the first place since most rounds will go straight through its armour.

The OF-40 MK.2A can be a truly powerful vehicle when used in the right hands. For people who are going through the stock grind, it is recommended that you play a support role, until you get access to the APFSDS round. The OF-40 MK.2A is not very armoured, compared to other vehicles it will face, the main weak spots are the hull and the sides. So for people who have just picked it up, either play as a support, sniper or flank, as the stock HEAT round is not very good to deal frontally with most of the enemies. One thing the OF-40 MK.2A has that its German rival doesn't have, is superior turret Armour. This means that you can easily go hull down on certain maps and manage to bounce a few things coming your way. Once you have gone through and researched most of its modifications, such as the APFSDS round and the engine upgrade, you should be ready to play a more offensive role. A good point you could take advantage of is your speed, your engine will be decent enough that you'll easily be with or ahead of your team most of the time. Use your speed at the start of matches to get to positions that enemies might not expect you, which might guarantee you the first shot in most engagements. Your gun is also very good at long ranges so it is also not a bad idea to keep your distances, since you cannot count on your survivalbility at all times. Do the same for night battles. This also should apply for all game modes, be aware that in Arcade battles the enemies are able to see your weak spots when they aim at you, so keep that in mind if you decide to go hull-down as an experienced player might just go for a different module, such as your cannon barrel or breech, and finish you off slowly.

The OF-40 main battle tank (MBT) was delivered to the UAE after first being unveiled in 1980. After a number of issues were highlighted by the user, an improved version called the OF-40 Mk.2 was designed, beginning trials in August 1982. It was optimized for operations in the desert and had a number of other improvements.

The UAE, despite the numerous improvements over the OF-40 Mk.1, were unsatisfied with the OF-40 Mk.2. They believed the mobility was too low and that the gun wasn't powerful enough. As such, it was replaced by the French Leclerc. Despite being removed from active duty units, 36 OF-40s were listed to be in storage or reserve as of 2014.

In the late 1970s, Oto Melara and Fiat began developing the first Italian post-WW2 tank, under a join private venture. As Oto Melara was already mass-producing the German Leopard 1 MBT under license for the Italian Army, its engineers possessed sufficient experience and know-how in order to develop their own tank.

The resulting vehicle, designated OF-40, turned out to be, somewhat unsurprisingly, very similar in design to the German Leopard 1 already in service with the Italian Army. Nonetheless, the OF-40 became the first domestically developed and produced Italian tank after WW2.

Despite the many similarities however, the Italian military proved reluctant in ordering the OF-40 for mass production. As a result of being unable to find a domestic operator, Oto Melara turned to the export market and soon found a willing buyer - the United Arab Emirates.

Shortly after, the OF-40 was upgraded to the Mk.2 version which, among other things, improved the vehicle's optics and rangefinder, added a two-plane stabilization system for the main gun, and an improved fire control system, allowing the vehicle to fire improved ammunition.

The OF-40 was only built in limited numbers and for a limited time, with the UAE being the only operator world-wide. The UAE still uses the OF-40 today, although in different roles, with proposals being made to convert the vehicle into a heavy IFV.