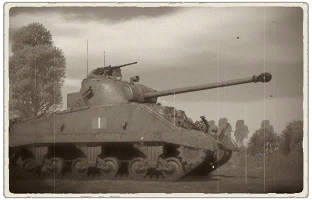 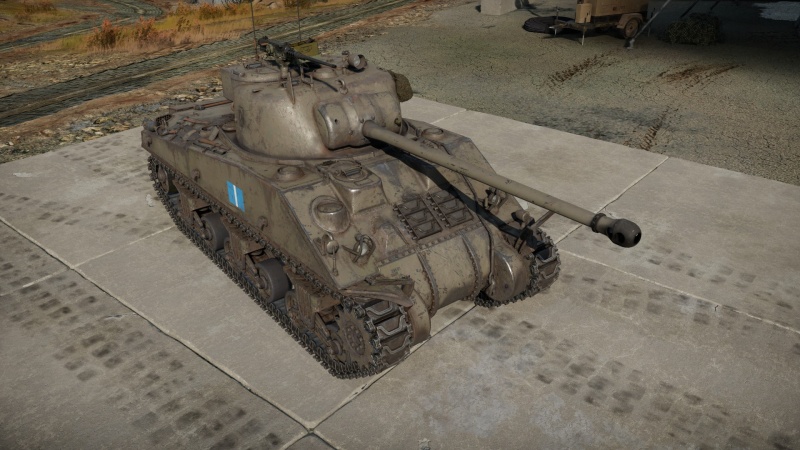 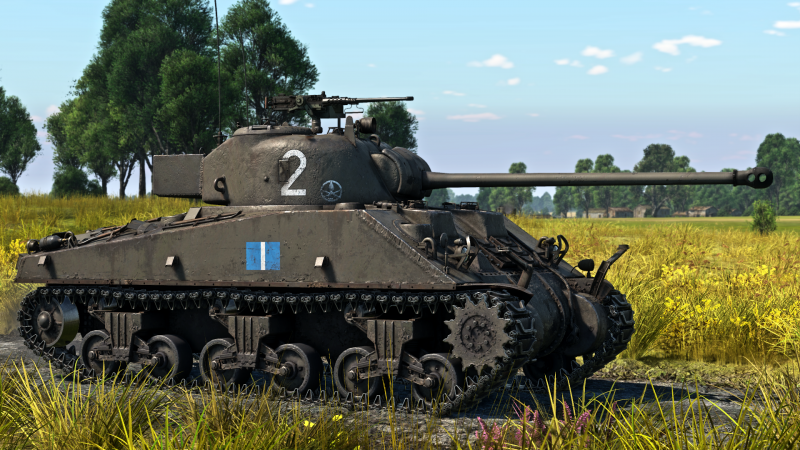 The Carro Medio Sherman Vc is a rank III Italian medium tank with a battle rating of 5.0 (AB/RB/SB). It was introduced in Update "Starfighters". One of the most famous Sherman modifications in World War II, the Firefly introduces the potent 17-pounder anti-tank gun as the main armament of the Sherman platform, presenting a very drastic increase in firepower over the original 75 mm gun. This variant, the VC, was based off the chassis of an M4A4 Sherman.

The Sherman Firefly is easily distinguishable by its very long gun, even compared to the Shermans with the American 76 mm guns. The muzzle brake on the cannon is also in a spherical shape rather than a horizontal rectangular shape so that is a distinction between the 76 mm cannon and the 17-pounder. The hull is resemblant to that of the M4 Sherman although lacking the bow machine gun (it's actually based off an M4A4). The turret is also very similar, although the radio sticks out of the back in a bustle.

This tank should be the supporting line in both offensive and defensive actions, providing flanking fire, long-range fire, or fast and accurate fire to the target while the heavy tanks take up the brunt of the defense. The tank is as mobile as the M4 Sherman, so picking up speed to get around the enemy is not hard. Those familiar with a M4 Sherman control will pick up on this tank very easily. While this tank is also capable of being the frontal attack unit for an assault, it is strongly advised to not due to the thin armour of the tank, necessitating the users to always get the first shot off in an encounter, otherwise the enemy will be able to destroy the Firefly easily. For a conservative, almost TD-like role, it can also perform, destroying tanks from afar. 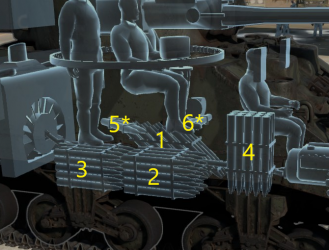 Shoot and scoot. Unless the enemy's tank gunner has been knocked out (black only), cannon breech has been disabled (red/black), or cannon barrel is disabled (red/black) that inhibits the enemy's ability to fire back, don't expose the tank after firing. Always try to retreat back into cover to reload. Once reloaded, preferably pop out of an area different from the last firing position and take another shot. Make sure to eliminate the enemy's ability to fire back by destroying their cannon breech and traverse gears, or incapacitate their driver and gunner again if they were replaced. During this whole process, watch out for other enemy tanks and avoid being swarmed. With situational awareness combined with the correct usage of the map, the Firefly becomes a decent tank capable of effectively fighting every medium and heavy tank it faces.

The Firefly can excel at vaporizing tanks that have clustered crew, like StuGs, SUs, T-34s, KVs, and even Panzer IIIs and IVs. The post-penetration affect of the Firefly's shells after the AP buffs allow it to decimate those tanks. However, it is recommended to still shoot from afar, as all of these tanks can destroy the Firefly easily.

Definitely do not play too aggressively. The huge weakness of the 3/4 crew in the turret is almost always pointed out immediately, because it's a huge issue. A good hit either means a quick trip back to the hangar, or a lengthy crew replenishment time in AB. But this ignores the fact that the tank is just a huge glass cannon, as any shot anywhere will likely cripple the tank.

The Sherman Firefly can dish out the punishment necessary for heavy tanks, but can't take it. Don't expose the tank towards enemy fire too long due to the thin armour on the Firefly in comparison to other tanks such as the Soviet T-34-85s and the German Panthers. Take a shot, preferably from a flanking location, then retreat into cover regardless of the shot's effect on target, because if the target could swing its gun towards the Firefly, or have friends that could hit it, consider writing off the Firefly very soon. This varies between different enemies, as going against something like the KV-2 would be different than going against a Tiger I. 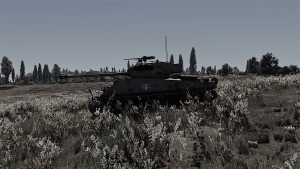 Impression of an Italian Sherman VC during military exercises

The Firefly first saw action in Italy in British, American, and Polish hands in the Italian Campaign in 1944, but were ceased since heavy German armour proved to be a challenging opponent for the Firefly. After WW2, Italy was supplied with tanks by the US and UK, such as the Sherman Firefly (designated as M4 Tipo IC or M4 Tipo VC depending on the variant) and M24 Chaffee, which were commissioned in 1947. At that time, Italy created the first nucleus for the formation of a tankers school, and on the 1st of October officially formed the Military School Organization.

The M4 Tipo VCs were decommissioned and scrapped in 1952.