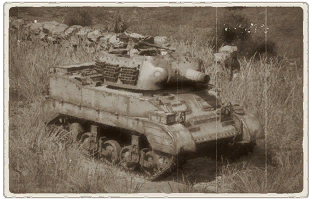 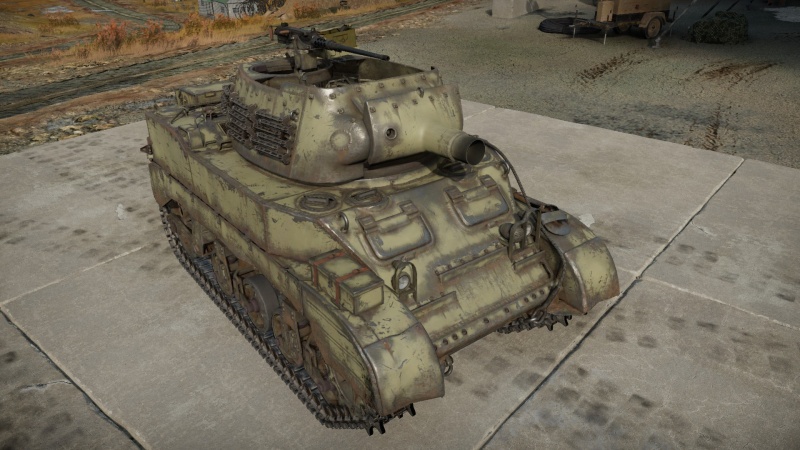 The ␗75 mm Howitzer Motor Carriage M8 is a rank I Chinese tank destroyer with a battle rating of 1.3 (AB/RB/SB). It was introduced in Update 1.91 "Night Vision".

In general, the M8 Scott plays like a beefed-up M5A1. Being based on the same chassis, the massive increase in gun calibre and destructive potential means that enemies the light tank previously had difficulty destroying can now be dealt with more easily. One strategy is to push for the capture point and take it immediately using the high speed the chassis is capable of reaching. Once the capture point is held, find a good hull-down position and use the 75 mm HEAT to destroy any and all oncoming tanks.

When attacking open-topped vehicles like SPAAs, tank destroyers and trucks, the 75 mm HEAT round can demolish a vehicle in one hit. If the 75 mm is reloading or is unoperational, the .50 cal M2HB machine gun can be used to great effect against the target. This machine gun can even be used from behind cover, with the entire vehicle hidden behind an object and the machine gun poking up and over it.

Against heavier armour, the need to find a good hidden position is critical. On certain tanks, the addition of track armour can give the M8 difficulty in penetrating them. A good hull down position on their flank can provide a shot to hit their side armour, which is generally less armoured. Keep in mind that some tanks like the Pz.III M, Pz.III N, and the 41M Turan II are equipped with sideskirts and spaced armour. These are designed to counter HEAT rounds and often can absorb at least one HEAT round with no damage to the components behind it.

Tanks like the Pz.IV F2 and its line of tanks can be a serious headache for the M8 Scott. A recommended strategy is to aim for the right side of their turret and knock-out their gunner first, then aim for the middle of their hull (upper or lower glacis works) for a final shot. Outside of that, most of the heavy armour will be out of the M8's BR range leaving most encountered vehicles viable to destroy.

If you finds itself under attack from the air, find cover as the M8 Scott's roof is open to any and all strafing fire. Once sufficient cover is found, you can switch to the cupola-mounted M2HB and attempt to shoot down the attackers. The .50 cal machine gun can output a decent amount of damage against critical components on an aircraft, and can pilot snipe an enemy due to its high penetration.

An M8 in display in Chengkungling, History Museum.

The Republic of China's M8 Scott Howitzer Motor Carriages were purchased around 1948 from the United States. Approximately 200 M8 arrived in Taiwan alongside batches of M7 Priest self-propelled guns and M4 Sherman medium tanks.

In 1948, the Chinese Civil War battles were still ongoing. Numerous battles were won by the Communist Party of China's armoured forces and they started to show rising superiority in tank and troop numbers. This superiority lead to their eventual total control of mainland China and the retreat of the Kuomintang to Taiwan.

The M8s were designated to provide close artillery support in case of massive Communist amphibious assaults in Taiwan and adjacent islands. This large-scale invasion never occurred and it is uncertain if the M8 Scotts took any part in combat on the Chinese Civil War aside from training exercises.

There are several preserved M8s currently in display in Taiwan.