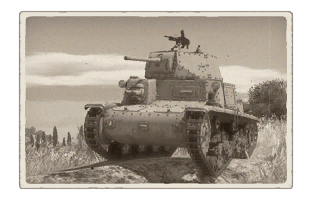 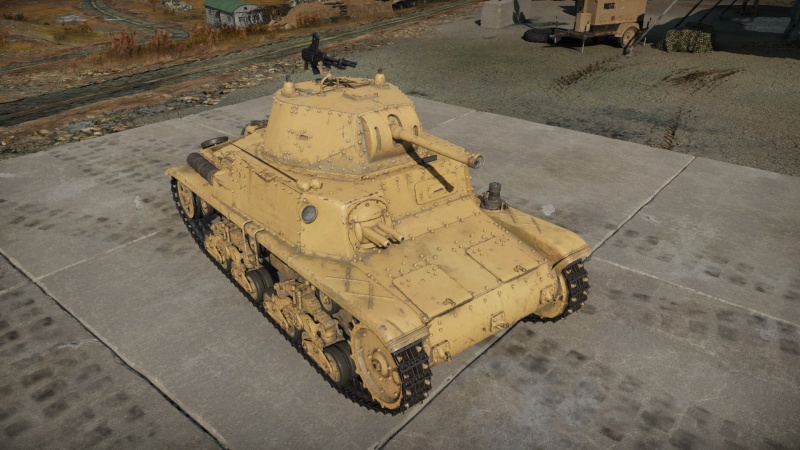 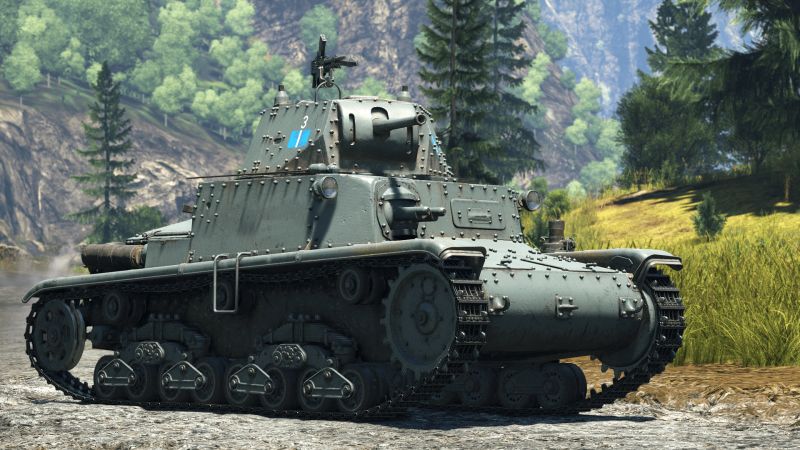 The M14/41 offers quite good armour and survivability for a rank I vehicle. The turret can block some distant shots with its 45 mm front and the sharp edges around the mantlet may ricochet some rounds. The upper glacis is almost impenetrable from the front due to the sharp angle. The most obvious weak spot is drivers vision slit and the side armour is lacklustre with 25 mm and no slopes. Placement of the crew is very good for the size of the tank, AP shots will often hit only one crew member due to the spacing and the driver and machine gunner sit very low behind the transmission. 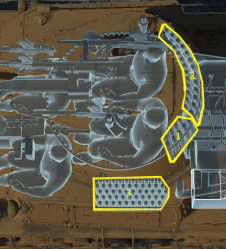 Although the pintle-mounted machine gun cannot traverse independently of the turret on the horizontal, its limited vertical traverse can make it useful against unprotected enemy crew as well as incoming aircraft. The coaxial-mounted machine gun is hard to use for anything, as it's limited by the traverse of the main gun.

In an RB battle, the M14/41 functions very similarly to the reserve M13/40 (III) tank, due to the fact that the two are (essentially) the same vehicle, with the M14/41 simply boasting a more powerful engine and sitting at a higher battle rating. The M14/41 features very thick armour for its rank, especially around the turret, where the angled 25 mm thick armour will often bounce rounds consistently, and the 30 mm frontal armour is not to be underestimated. Combined with a rather well spaced crew of 4, the M14/41 boasts a suprising amount of durability. This very well-protected tank, of course, has a very crucial weakpoint: A massive 30 mm flat plate on the direct front of the tank. A hit through this plate will often kill the driver and, more likely than not, the crucial gunner that sits behind him (and sometimes the commander as well, which will kill the tank). To avoid this, you can attempt to hide your flat plate in an engagement from the front by angling your tank about 30 degrees to the left, which will have your much more angled and durable machine gun port face your enemy, reducing the chance that you will be shot through your flat plate.

With a top speed of 33 km/h, the M14/41 is not exactly a fast tank, but not a slow one either. Its speed limits its opportunities as a flanker, but with its very durable armour and its very solid 47 mm gun, the M14/41 makes a very solid frontline brawler tank. When shooting from range, try to use your insane 15 degrees of gun depression to hide the rather vulnerable hull of your tank. When playing the M14/41, it is imperative to always check for flankers. Most enemy tanks at this BR usually move very fast and have quite powerful guns and small profiles. Make sure to listen for engine sounds and to check your sides and rear often. Your turret doesn't turn all too fast and your sides consist of flat 25 mm plates. All an M22 or Stuart needs to do is hit you there once and your crew will be dead before you realise what hit you. Keep your eyes open, and if you see something, make sure to rotate your hull; pivot turning in the M14/41 will always be faster than turning your turret.

After the extensive use in Yugoslavia, Greece and North Africa uncovered numerous mechanical and reliability problems with the M13/40 tank, Italian engineers set out to address these issues. Instead of developing a whole new vehicle which would replace the flawed M13/40, engineers at Fiat-Ansaldo decided to instead further develop and improve the M13/40's design and solve the various issues along the way. As a result, the new M14/41 was developed. Closely resembling its predecessor, the M14/41 was hard to distinguish from its predecessor as most of the changes and improvements were made to the vehicle's internals. Improvements included a new, slightly more powerful engine and transmission, improved air filters and electrics as well as several other changes. Production was quickly approved and began in August 1941, with existing M13/40 hulls simply being upgraded to the M14/41 standard. The first units arrived to frontline troops in North Africa by the end of the year, but only saw limited service in that theatre. The M14/41 was produced for only a short period of time, but close to 700 units were made.