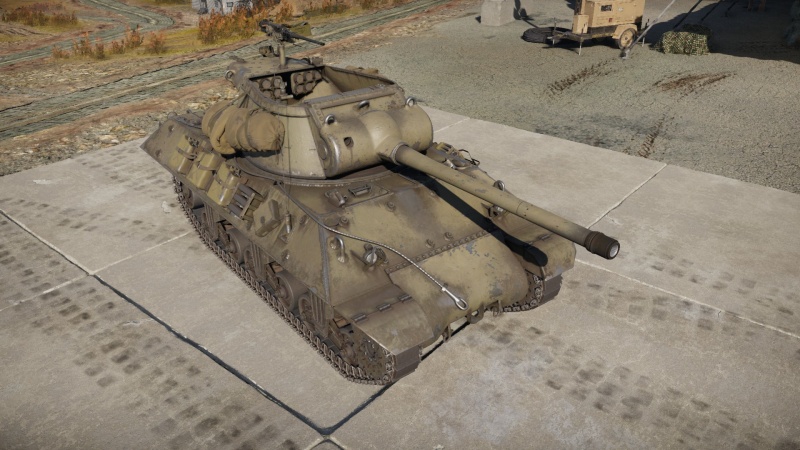 The 90-mm Gun Motor Carriage M36 (or the M36, nicknamed the Jackson) is a rank IV American tank destroyer with a battle rating of 5.3 (AB/RB/SB). It was introduced in Update 1.49 "Weapons of Victory". The M36 is a nice upgrade to the M18 GMC, owning a more powerful gun in the form of the 90 mm M3. If used correctly, this vehicle can be both a great threat to the enemy, and a very fun experience to its user.

The following modifications should be taken with priority:

The greatest advantages of the M36 are its speed and its armament. As such, the best course of action is to make use of the speed to get to good early game positions on the map. The 90 mm gun is powerful at its BR, and it can penetrate many tanks at its BR from the front. But, this is not the case for more heavily armoured targets such as those in the IS series or the Panther series, but it can reliably kill every tank at its BR from the side in 1 to 2 shots because of the high explosive filler in the APCBC round. In addition, most enemy tanks can reliably penetrate you from the front, as the M36 does not have thick armour. Your armour can only protect you when a shell hits it at an extreme angle, or against low penetration weapons, such as those one some anti-aircraft vehicles. All of these factors mean that the M36 should never engage enemy tanks from the front, unless they are preoccupied with a friendly vehicle or not looking in your direction, but the M36 should engage enemies from the side. As such, the M36's mobility should be used to get to positions that the enemy would not expect where it will be able to shoot the enemy in the side before they even realize you are there. The M36 can also use its mobility to flank effectively. If an enemy knows your location and has an operational gun, you should not push out into their line of fire, as they are likely to come of better than you. If an enemy is likely to be able to shoot you, do not chance it, as only one shot will often knock out or disable the M36. The rounds you should carry are a mix of M82 APCBC and M304 APCR rounds - which one is in the first slot is up to the driver. The APCBC round is sufficient against the side armour of virtually every target you will face, and can penetrate many enemies from the front. The APCR round is effective against the frontal armour of many enemy tanks. The advantage of the APCBC round is the high explosive filler, which can kill most of the crew in one shot if it penetrates. The APCR round is advantageous against more heavily armoured targets, but it has less post penetration damage, and when firing APCR you will need to aim for crew members.

The 90 mm gun started as the anti-aircraft M1 and M1A1 gun. It wasn't until the M2 model that it earned a dual-purpose role of anti-aircraft and anti-tank in May 1943. Finally, it was decided to mount the mighty gun onto a vehicle, starting with the M10 GMC. The tank mountable variant was called the 90 mm M3 and was tested on the M10 tank destroyer in early 1943. After installing a modified turret onto the M10 body, the vehicle was designated the T71 GMC, it was approved for service and renamed as the M36 GMC. The nickname Jackson for the M36 was given in September 1944 by Ordnance Department, however, this nickname never saw use during war documents. The nickname only became well-known to the public in the 1970s, and soon became synonymous to the vehicle. Like its predecessor, it features an open-top turret and exposes the crew to the elements and enemy fire. However, a postwar modification allows a folding armoured roof to protect the crew from rain and shrapnel.

The M36 GMC arrived at Europe in September 1944. Though 1,400 were produced during the course of the war, the demand for self-propelled 90 mm guns was so high that 187 M4 were converted with the 90 mm and sent as the M36B1. The 90 mm was met with much approval by not only the crew, but other units around the area as the 90 mm could deal with the thick German armour on the Panthers and Tigers. The M36 GMCs were deployed in the Battle of the Bulge along with its other tank destroyer types, where it took out many German tanks with ease due to its high-power cannon and ability to ambush the tanks by the flanks. Humorously, there was an account sometime in March 1945 where a unit of the 635th Tank Destroyer Battalion radioed into their logistic support asking why their newly supplied 90 mm shells were more than a foot too long for their gun chambers. A few forwarding later got the message to a Captain Elmer Gray, who happened to be looking for the misplaced rounds for the new "Super Pershing" doing combat tests.[1]

At the end of World War II, The M36 GMC's role in the tank destroyer doctrine became obsolete. Mainly due to increasing prevalence of well-armoured tanks that could do its job more efficiently such as the M26 Pershings (which also had the 90 mm gun), but also the lack of German AFVs at the time of the war and a study on ammo usage indicates that the tank destroyers spent more time supporting infantry with high-explosive shells than killing tanks with armour-piercing, rendering the anti-tank section an unnecessary component in the modernizing armoured forces.

The SPG is a 90 mm M3 cannon installed in an open-topped, rotating turret on the body of the M10 SPG. It was developed as an enhanced carrier for 90 mm guns for fighting German heavy tanks, which current American tank models were unable to do successfully.