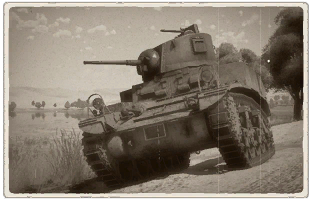 The Light Tank M3A1 Stuart is a rank I American light tank with a battle rating of 1.7 (AB) and 2.0 (RB/SB). It was one of the first American tanks to be released with the American ground tree in Update 1.45 "Steel Generals". Compared to its predecessor, the M3, it has a more streamlined turret shape that presents a smaller target.

Ammo rack of the M3A1 Stuart.

Like all early American tanks, this tank works best from a distance where its armour can shine and its gun can provide fast covering fire. However, this tank also works well in tight spaces if the armour is angled correctly, thanks to is the ability to bounce shots and snipe enemy crew with its AP ammunition. It will also hold its own as a hit and run the tank with its fast speed and quick firing gun. But when in this tank, go for the German tanks or American as the Russian tanks have a better gun and armour. But against the Panzer III and IV, the M3A1 will be fine.

The first variant of the M3 Stuart light tank was very similar to the M2 light tanks. It had five machine gun armaments scattered around like the M2 but featured better armour and a better cannon with the 37 mm M6 cannon. The design did not have a turret basket for the crew and it was constructed out of rivets, which increased the chance of spalling in the tank. Nevertheless, the first variant M3 saw about 5,811 units produced. The second variant, the Light Tank M3A1 Stuart , featured a new turret with no cupola on it, plus an added gun stabilizer. The machine guns on the hull sides were removed, so now the total machine guns were reduced from five to three. The design also featured a welded armour design to remove the weakness of riveted armour. 4,621 of this variant was produced from May 1942 to February 1943. The most used variant, the M5A1 Stuart, had a completely redesigned hull and turret, with the hull most notably having a full sloping frontal armour than the previous designs. This variant had about 6,810 units produced. All in all, the M3 light tank design and its variants were produced in massive quantities from March 1941 to October 1943 with a total of 25,000 units produced.

"Production of the M3A1 Stuart modification got underway in April 1942, with its primary changes affecting turret construction. The turret was a horseshoe-shaped M3, though it did not have a cupola, and two triangular hatches on its roof served as exits for the crew. The gunner and reloader had periscopes. The turret rotated using a power traverse as opposed to the manually rotated M3. Its faster rotation speed required changes in its construction, in particular a basket fitted with seats for the crew members.

The M23 mantlet was fitted with a 37 mm M6 cannon featuring a gyro stabilizer that significantly boosted accuracy while on the move. That did, however, require more training for gunners, a difficult assignment under battlefield conditions. The sponson-mounted immobile M1919A4 machine guns were replaced with additional ammunition storage, pushing the tank's capacity to 116 shells and 6,400 bullets.

From April to August of 1942 the M3A1 was produced alongside the M3. Changes were made gradually, meaning that some later M3s featured welded bodies and new turrets. They lacked, however, the basket and power traverse, and were called Stuart Hybrids. Some early M3A1s had sponson-mounted machine guns (the intervening models plugged up the openings) and riveted bodies. By the end of February 1943, 4,621 M3A1s had been assembled, 211 of them with the Guiberson T-1020-4 engines (called Stuart IVs by the British). It is worth noting that the M3A1s with welded bodies should have been designated M3A2s, though that never actually happened."