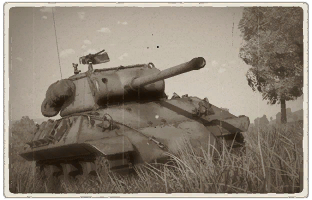 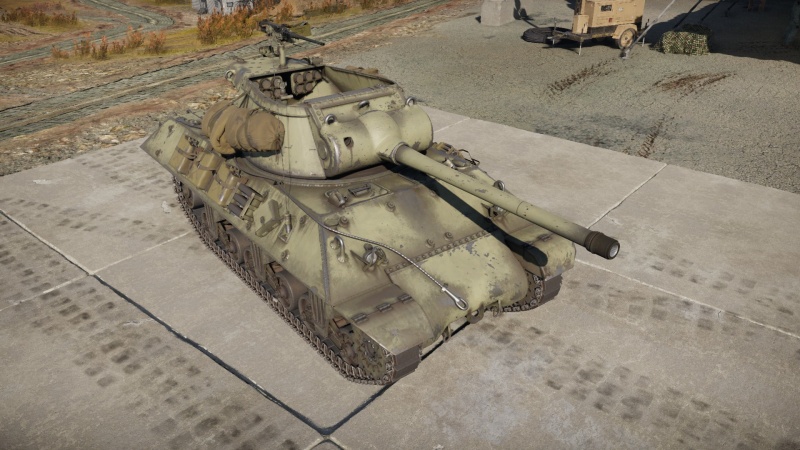 The ␗90-mm Gun Motor Carriage M36 is a rank IV Chinese tank destroyer with a battle rating of 5.3 (AB/RB/SB). It was introduced in Update 1.91 "Night Vision".

The 90 mm cannon on the M36 is great at its BR. The stock AP has good penetration but lacks damage, so it is recommended to quickly unlock the APCBC which is superior in every aspect.

Playstyle with the M36 should be about the same as the M10 GMC. The speed is slightly better and armour is still just as thin, but it has an improved turret traverse rate and a 90 mm gun, making it able to engage targets much easier. The playstyle is also similar to the M18, since they have the same concept - speed and manoeuvrability with a powerful armament.

The greatest advantages of the M36 are its speed and its armament. As such, the best course of action is to make use of the speed to get to good early game positions on the map. The 90 mm gun is powerful at its BR, and it can penetrate many tanks at its BR from the front. But, this is not the case for more heavily armoured targets such as those in the IS series or the Panther series, but it can reliably kill every tank at its BR from the side in 1 to 2 shots because of the high explosive filler in the APCBC round. In addition, most enemy tanks can reliably penetrate you from the front, as the M36 does not have thick armour. Your armour can only protect you when a shell hits it at an extreme angle, or against low penetration weapons, such as those one some anti-aircraft vehicles. All of these factors mean that the M36 should never engage enemy tanks from the front, unless they are preoccupied with a friendly vehicle or not looking in your direction, but the M36 should engage enemies from the side. As such, the M36's mobility should be used to get to positions that the enemy would not expect where it will be able to shoot the enemy in the side before they even realize you are there. The M36 can also use its mobility to flank effectively. If an enemy knows your location and has an operational gun, you should not push out into their line of fire, as they are likely to come of better than you. If an enemy is likely to be able to shoot you, do not chance it, as only one shot will often knock out or disable the M36.

In a downtier, there are not a lot of heavily armoured tanks that the M36 can't penetrate, so the player can also choose to not flank, but to sit at a position and be a sniper. It's best to find a spot that:

This way when any enemy comes in sight, the M36 can easily finish it off, therefore "locking down" this key passageway, preventing the enemies to push and attack which gains a significant advantage to your team.

Under known documentations, the PLA nor ROCA received the M36 GMC (but PLA did captured one during the Korean War as PVA [People's Voluntary Army] in 1951, now displayed in Beijing), however the ROCA have received the M36B2 variant from France.

As part of the retreat from Vietnam due to the total loss of French Indo-China, 8 of the M36B2 of the French Army were returned to USA and then handed to ROCA in 1955 to the 3rd Armored Artillery Company, 600th Field Artillery Group of Kinmen Defense Command as a part of the emergency military aid against the ongoing artillery war between ROCA and PLA at costal Xiamen/Kinmen. They were positioned into fortified position with a slope for better trajectory against PLA targets on the other side of the Xiamen Bay. A memoir from a ROCA veteran claimed that one of these M36B2 took down a PLA broadcast station while records from ROCA have recorded losses of two M36B2 during the war.[1] The remaining of these M36s were likely decommissioned in 2000 as some photo suggests that two of them were still in commission as late as 2001.

All the remaining 6 tanks are currently in Taichung (at Chenggongling Training Facility), Hsinchu (in ROCA Armor Training Command at Hukou Township; a theme park at Xinfeng Township respectively), Kaohsiung (ROCMC School at Zuoying) and 3 on Kinmen (2 are still in their combat fortifications while the remaining known one is at the Rushan Fort [乳山故壘] tank walkway[2])