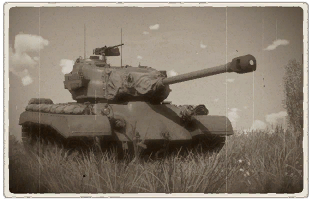 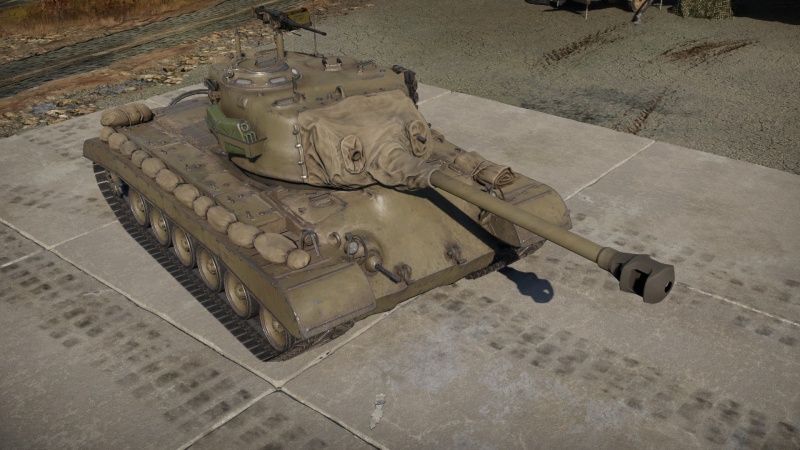 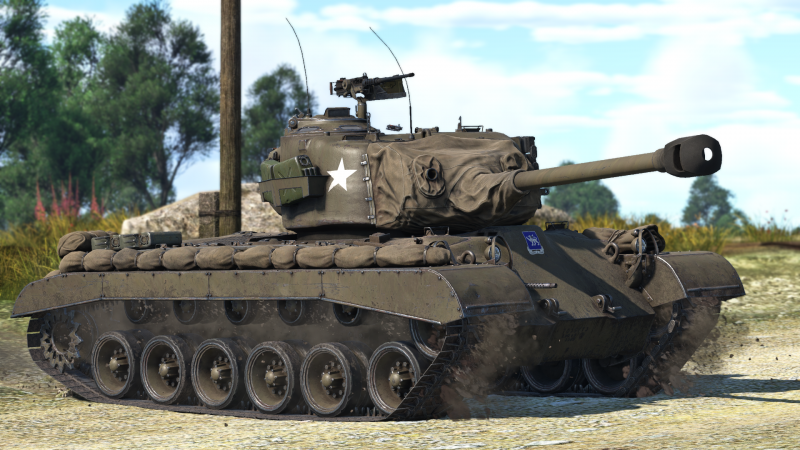 The Assault tank T26E5 is a rank IV American heavy tank with a battle rating of 6.7 (AB/RB/SB). It was introduced in Update "Ground Breaking".

It is a American assault tank intended to be used like M4A3E2. It is based on the M26 Pershing, uses the same 90 mm M3 gun but has additional armour on the front and the turret. Therefore, the T26E5 is able to effectively combat late World war II vehicles with greater efficiency compared to its predecessors.

The frontal armour is quite strong, able to resist common weapons such as the 7,5 cm KwK42 and the 8,8 cm KwK43 if angled properly. A notable weak spot on the front glacis is the machine gun port but it is a small target difficult to hit with precision. The other notable weak spot is the lower front plate. With a relatively thin lower glacis, it is not able to absorb rounds from most guns, and there is no transmission to absorb a penetrating shell. However, the side armour can protect you to a certain degree when angled.

The turret armour is strong, consisting of variable thickness armour ranging from 150 to 300 mm thickness, with the mantlet ranging from about 100 to 200 mm of protection. A notable weakness in the turret is the first stage ammo, stowed on the left side of the turret, protected by about 170 mm of armour, plus 20 mm from an added track segment. Any penetrating shell hitting the turret from this side will most likely knock out all of your crew members in the turret as well as detonate the first-stage ammo rack.

The cupola with only 76 mm thickness can be penetrated by an APHE shell, taking out your gunner and commander, however the cupola is small in size, and is not an easy shot to make.

Survivability is about average for a tank of this type. You have 5 crew members, which is standard for US tanks at this time, but the turret is cramped, and a well placed shot can destroy the tank entirely if said round has an explosive filler.

Additionally, this tank only has 25 mm of protection on the roof, making it vulnerable to attacking aircraft with heavier ground focused weapons.

The T26E5 use the same engine as the M26 Pershing. It has a poor power-to-weight ratio and its top speed is 40-43 km/h. But expect the average cruising speed to be closer to 30 km/h. When off-road the speed will drop even more. Lacking neutral steering, it might be difficult for the heavy tank to turn in urban environment. As such, the player should plan the route they want to take carefully and avoid flanking manoeuvres that will take a lot of time.

The T26E5 uses the same standard ammunition found in the other 90 mm M3 cannons. When first unlocked, the T26E5 will have an APBC(T33) shell as its default round. The APBC has decent characteristics, but since it doesn't have any explosive filler, it should be replaced by the APCBC(M82) shell as soon as possible. The APCR shot can be used to penetrate some heavily armoured vehicle such as the Tiger II (H), the Ferdinand or the Jagdtiger but the player should be aware of the poor post-penetration damage of the APCR projectile. Thus, the APCR should be used as a last resort against an already disabled tank. Additionally, the HE shell can be used to damage lightly armoured vehicles and the smoke shell can be used to provide smoke cover for teammates or to blind entrenched enemy tanks.

The 12.7 mm M2HB Browning can shred light tanks and also engage low-flying aircraft to a certain degree. The coaxial 7.62 mm machine gun is not able to damage anything except open-topped vehicles and unarmoured trucks.

The T26E5 is a heavy tank and should be played like one: stick with allies and move slowly. It is best used in positions that have concealment, this allows you to get the first shot off. When in positions with cover, you should wait for enemies to come to you. Generally, the better the position the better the tank will perform. Its armour can defend against some of the MBTs of the BR, but do not rely on it, and in uptiers it can struggle when against better rounds. It's best to try and cover your flank, as pretty much any round at the BR will penetrate your sides. This can be done by having teammates nearby, or a good position. In close range situations, it would be best to use the M82 round, but it must be aimed well. When it hits weak spots, the explosive filler is large enough to take out several crew members. If not, it can bounce easily against sloped armour. For medium and longer ranges, the M304 round will work better, but you will have to aim at specific components within the tank, as the APCR round does not inflict as much post-penetration damage as the M82 round.