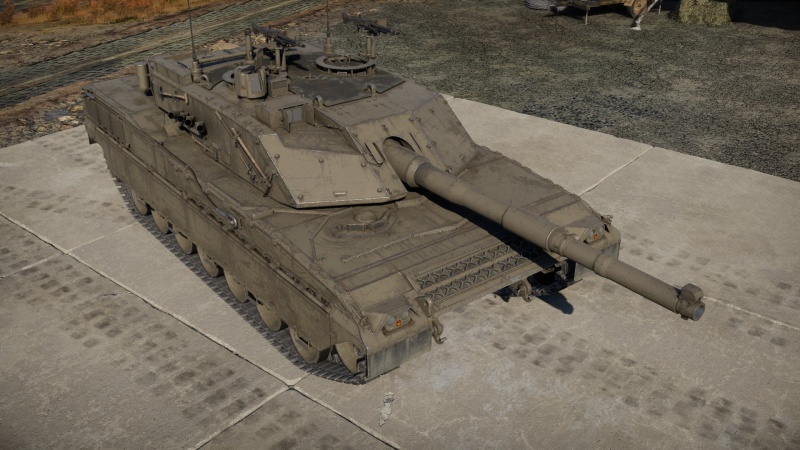 The C1 Ariete is the least armoured top tier MBT currently in the game but that does not mean it has no armour to speak of. The turret front is decently protected especially with the WAR kit modification allowing it to stop all APFSDS rounds fired from guns smaller than 120mm as well as most of the weaker 120mm APFSDS rounds such as the 3BM22, L23A1 and DM13. The WAR kit also makes the turret invulnerable to all HEAT threats except for tandem ATGMs. The mantlet on the Ariete is not too large but it will be your weak spot from the front but that is also true for all other MBTs. The gunner and commander sit on the left side of the turret while the loader sits on the right, and the large optics block on the left side of the turret can occasionally save your gunner and commander by soaking up the post penetration damage.

Unfortunately that's where the armour ends, the hull is one large weak spot with a huge LFP consisting of just one angled 50mm plate that won't stop anything fired at you even from 8.7 vehicles; while the UFP is made out of spaced armour that can only stop auto-cannon rounds or 105mm APDS shells. Shots through the hull will most likely take out the tank immediately, a shot on the left side of the hull front would take out the driver, gunner and commander, while a shot to the right side would hit the first stage ammo rack. Like most top tier vehicles, the tank sides offer little protection, though the fuel tanks in the side of the hull might soak up the occasional HEAT round but it isn't something you can rely on. Ultimately, it is advised to play this tank away from the front lines sniping whenever possible peaking from behind cover to maximize the use of your turret armour. 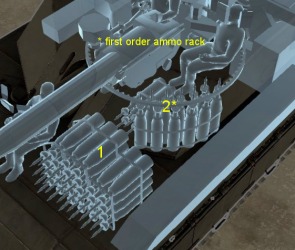 Ammo racks of the Ariete

The C1 Ariete has access to a decent round, the CL3143, and with the WAR add-on armour installed, can also protect itself against some 125 mm APFSDS and the majority of low level IFV autocannon fire. The best playstyle for the Ariete, especially when you are just starting out with it, would be more a supportive one, such as flanking manoeuvres or to stick with your better armoured teammates who can withstand hits such as Leopards 2A6. The Ariete being one of the weakest top tier MBTs for its battle rating, it is advised to keep your distance and try pick enemies from far away. With the CL3143 round, you can easily take out the majority of enemies with one hit if you aim right. Most top tier MBT weak spots at the front are the lower front of the vehicle. If you manage to flank the enemy team, go for the sides or where the ammunition is stored as that also will usually get rid of an enemy quickly. When you have unlocked the WAR add-on armour kit, you have more chances to play hull down which will greatly increase your overall effectiveness on the battlefield, as you'll be able to withstand some shots coming your way. Remember that in Arcade Battles, enemies can easily find out where you are with your name tag and where your weak spots are. The Ariete also has access to commanders thermals, something the previous vehicle (Ariete (P)) did not have. This will be one of the most useful items in your arsenal and will allow you to better spot enemies from behind cover, as well as quickly engage and disengage without exposing yourself long enough for the enemy to see you coming. If you can master this technique, you'll be able to still be useful despite being at a disadvantage.

The history of the C1 Ariete begins during the late stages of the Cold War, with a program born out of the need of the Italian army to modernize the fleet of tanks they had during the Cold War, which were the Leopards and M60s. Those tanks would be considered obsolete, considering the fact that many countries around the world who adopted such designs had either put them out of service or replaced them for something more modern. To make the new Italian MBT, Italy put Iveco and OTO Melara in charge. Iveco dealt with the hull, transmission, and engine, while OTO Melara took care of the turret, cannon, and the installation of sights. After many changes, and a couple of wooden mock-ups, the C1 Ariete (P), would first be shown to the public, at a presentation inside of La Spezia in 1987. Development kept on continuing towards the year of 1990, which allowed both Iveco and OTO Melara to refine the C1 Ariete's design. Deliveries were scheduled to first take place in 1993, however due to some setbacks (likely funding) it wouldn't be until 1995 that the first C1 Ariete production deliveries actually took place. At first an order of 300 tanks would be made, but due to the Cold War coming to an end, it was reduced to only 200 units, which would all finally be delivered on 7th August 2002.

The C1 Ariete had many new advancements that the previous tanks that Italy used could only dream of having. The first C1 Ariete production models had access to the TURMS 3rd generation LTFCS made by Officine Galileo, which gave the capability to the Ariete to fire on the move, both during the day and at night. However later down the line, the last 50 Arietes would receive an upgrade of their sights, which resulted in many improvements, such as giving the C1 Ariete commanders thermal imaging. In terms of armaments, the C1 Ariete (P) and C1 Ariete Production have access to a 120 mm smoothbore gun, made by OTO Melara, with similarities to the German made L44. The Ariete can fire all NATO standard munitions, however as of now the best round that is known the vehicle has in service, would be the CL3143 APFSDS, which is a license-produced version of the M332 Israeli-made round. In 2010 there were plans to buy M338 APFSDS for the C1 Ariete, which was basically DM43 with an improved cap, but nothing came out of it, however as previously mentioned before, if need be the C1 Ariete can fire the majority of NATO standard munitions. The C1 Ariete's armour is currently classified, as it is currently still in service, however CIO (Consorzio Iveco-Oto Melara) claim that it is a mix of steel and composite on both the hull and turret. Most experts claim that the C1 Ariete, at least the first production models, had similar if not better protection than a Leopard 2A4, this does hold some truth as both tanks were designed around the same time.

Currently there are 3 known upgrades to the C1 Ariete armour, one of which was first shown in 2002 in the form of a mock-up of the "C2 Ariete", though the planned upgrades never came into fruition. However a couple of C1 production Arietes would later be equipped and tested with the add-on armour package known as "WAR". As the name implies, the new pack was made for war scenarios, and is said to stop a lot of APFSDS rounds from actually entering the tank, giving a new elevated protection to both the tank and the crew. The second armour upgrade would come in the form of the "PSO" kit (Peace Support Operation), which would add new composite add-on armour to the sides of the C1 Ariete. The Ariete PSO was deployed during Operation Ancient Babylon in Iraq. And last but not least, recently it was discovered that a mix of WAR+PSO was tested on the C1 Ariete, although little to no information is available on this upgrade. There is one upgrade that is in the works, known as the C1 Ariete AMV, standing for "Ammodernamento di Mezza Vita" (English: "mid life update"). This new update is said to bring the C1 Ariete up to standard; planned upgrades include a new modern sight and thermal system made by Leonardo, active protection systems, better armour, new engine, and much more. The first 3 AMV prototypes are said to be complete by the end of 2021. In terms of service, the C1 Ariete has partaken in many peace-keeping operations around the globe, such as in Yugoslavia, Iraq, and now currently being used in Latvia for NATO's Enhanced Forward Presence mission.

The Shooting Range #152 - Metal Beasts section at 00:35 discusses the Ariete.