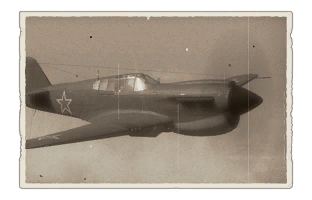 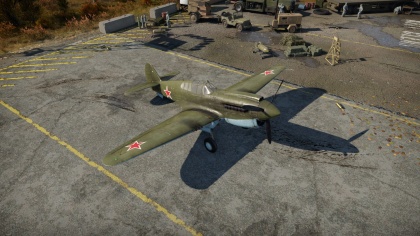 The P-40E Kittyhawk is mainly used as a fighter, but can also be converted to a fighter-bomber with the option of adding bombs. The 6 x 12.7 mm Brownings make excellent air-to-ground combat weapons, with an excellent ammo count, but this can leave the Kittyhawk weak if doing constant manoeuvres for a firing position. The aircraft is designed as an all-round fighter, but any RB Kittyhawk flyer will tell you it is best at medium and lower altitudes (3,000 m is normally that middle altitude). This is because the engine's performance is poor at higher altitudes, unlike its successor, the P-51 and overall, the engine isn't the best at its tier: the aircraft's main asset is straight-line speed- it will easily outrun E-3s (though not out-climb) and the A6M2 Zero. Head-ons are somewhat advisable against lightly/ un-armoured targets, such as the Zero, but otherwise, the best attack plan is to use the straight speed to catch, then energy-save-climb a few 100 meters and then dive onto the opponent before running again.

Although it can be used as a fighter-bomber, it is recommended to not use bombs on the plane to keep its manoeuvrability up for its main purpose: dog-fighting.

The P-40 is good at low altitude and turn-fights. Compared to planes like Bf-109's that it faces, eg the E-3, G-2s and F-4s, these aircraft can't keep up in a turn but are overall faster. The speed of this aircraft, 560 km/h makes it pretty fast for its tier and battle rating, however, this is only applied at lower altitudes. An important point to remember is that this aircraft cannot perform above 5,000 m. While it can eventually reach 9,555 m, it is all but useless at this altitude, since any aircraft it would typically meet at that height would have superior engines that work best at these altitudes.

In Ground RB, the P-40 can excel as a fighter as air battles often take place at lower altitudes in order to support allied ground units. The P-40 can out-turn most of its contemporaries and can also boom and zoom on slower, less armoured targets (i.e. a lot of Japanese air vehicles). Below is a list of some air units you will face and should take care in engaging.

P-40E aircraft were built on a full scale both for the USAAF and the RAF under the designation of Kittyhawk Mk.I. The British variant differed in some components and was delivered to the USSR as part of the Lend-Lease programme.

The main spheres of the Kittyhawk's combat use in the USSR included covering large cities and important facilities as part of the Air Defence Force, accompanying bombers (including torpedo bombers), independent bomb and ground attacks, and air reconnaissance.

Combat experience showed that the P-40 was not then able to face the new Luftwaffe fighters on equal terms, but its speed and powerful armament made the Kittyhawk an effective means of fighting enemy bombers. So, beginning in 1943, most P-40s were sent to fighter regiments in the Air Defence Force. By the end of 1944, the Air Defence Force had over 900 planes of this type.

Deliveries of P-40s to the USSR ceased in December 1944. A combined total of 1,887 Kittyhawks were received by the Air Force of the Workers' and Peasants' Red Army and the Air Defence Force. 311 more P-40s were received by the Naval Aviation force. The aircraft were withdrawn from service in 1946.