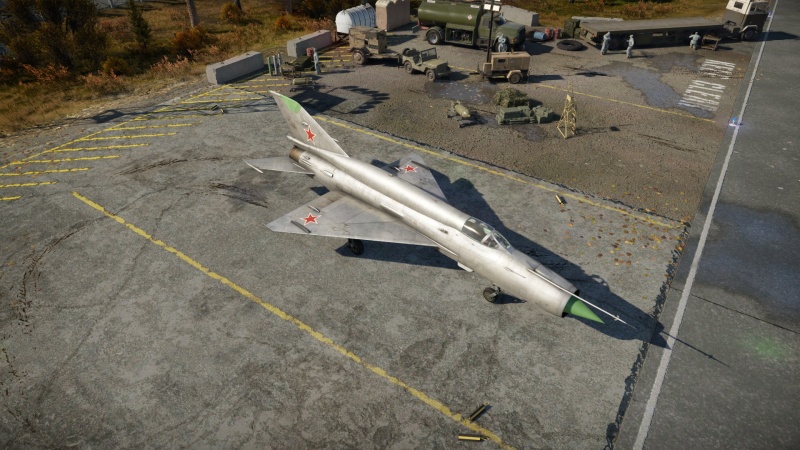 The MiG-21SMT is a third-generation model of the famous "Fishbed" family. The external appearance differs from the MiG-21F-13 with a larger nose housing a search radar and a bulging fuselage spine holding more fuel. Under the hood, it is a significantly modified and improved aircraft: a dual-barrel 23 mm GSh-23 cannon replaces the single NR-30, the engine is much more powerful, it has access to a decent number of chaff/flare countermeasures, and the missile armament has been greatly improved with the addition of the radar-guided R-3R and the highly agile IR-guided R-60. Other than that, the classic MiG-21 handling characteristics of high speed, good short-term turning, high manoeuvring energy loss, and poor low-speed handling still apply. The MiG-21SMT can also pull double duty in the ground attack role for mixed battles, because four S-24 heavy rockets and a ballistic computer is enough to dispatch several ground targets.

Fishbed enthusiasts can look forward to the MiG-21bis, the ultimate Soviet MiG-21 model, or move on to the MiG-23M Flogger, a radically different design.

As an evolution of the previous MiG-21F-13, the MiG-21SMT inherits some flight characteristics of its older sibling.

Both of them can pull high angle-of-attack (AoA) which enables its pilot to easily get guns on target at the cost of extreme speed loss. Both of them are light aircraft which enables them to climb with ease. And both of them have high wing loading, which can hinder manoeuvrability, particularly at high altitudes where the atmosphere is thinner. However, that's where the similarities end, as the MiG-21SMT comes with upgrades, most notably removed armour which shaved 500 kg off its scale and an uprated engine, the R-13F-300, which outputs 5722 kgf, 700 more than R-11F-300 on MiG-21 F-13. In practice, this means that the MiG-21SMT is best in class when it comes to acceleration and climbing performance.

Manoeuvrability-wise, the SMT is extremely nimble at lower altitudes, where its high AoA can outweigh its high wing load, and high acceleration can mitigate speed loss, allowing it to pull hard turns, provided the pilot monitors the speed. At high altitudes, the story is different, as it proves to be very unresponsive, leaving the user vulnerable to attacks, particularly to missiles. One more characteristic any prospecting user should note is that the aircraft tends to break its wings beyond 11 G, and considering the MiG-21SMT will merrily pull over 12 G at high speed turns if the boosters modification is equipped, unequipping it may help if the pilot has trouble with wings ripping.

When it comes to raw straight-line speed, the MiG-21SMT can get to its top speed much faster than its contemporary fighters at any altitude. In fact, speed should always be monitored, as it can easily reach its relatively high wing speed limit of ~1300 km/h indicated airspeed (IAS), even at level flight. High acceleration and high top speed mean that the MiG-21SMT is more than able to intercept almost any target, the only exception being F-4C which is already sitting at its top speed. One more notable feature is that due to its low weight and high thrust, energy management is a breeze and the aircraft will quickly both lose and gain speed, which may prove useful when trying to stay on the target's back.

The MiG-21SMT is a light fighter and its survivability reflects that. It lacks armour and the airframe is fragile. On top of it all, MiG-21, in general, has a very unstable airframe, which means that any changes to its aerodynamic properties may make it difficult to control. Exercise caution when flying it.

The MiG-21SMT is armed with:

The MiG-21SMT can be outfitted with the following ordnance presets:

The MiG-21SMT can be armed with both anti-air missiles and ground strike ordnance on its four hard-point pylons under the wing. While most of the weapons can be seen on other aircraft, the unique weapon that this aircraft can carry is R-60 IR air-to-air missile. Compared to R-3S which can be found on most Russian aircraft capable of launching missiles, R-60 has a much more sophisticated IR tracking system, allowing it to track targets up to 5 km away, and keep them on its sights at a much faster pace, which results in a reliable lock that not many targets can shake off. R-60 can also be fired in a wider range of situations, as the missile can track targets while on the pylon. This is critical to how the missile works which means that the missile has a much higher launch load factor and is able to intercept targets immediately after being launched. This is much different than the R-3S which tracks targets only half a second after launch and needs the platform to stay still in order to track the target, leaving the aircraft vulnerable to attacks. R-60 is a much smaller missile than R-3S, weighing at 44 kg instead of 77 kg that an R-3S weighs. Missile's explosive payload is also significantly smaller, weighing at 3.5 kg. Rocket motors on R-60 are much smaller than on R-3S and this means that R-60 is much slower than R-3S, and even though it can lock on targets at 5 km, it has a lower range than R-3S. In practice, R-60 is a reliable and potent anti-aircraft weapon that excels at taking out even nimble targets in dogfights at ranges from 300 m to 2 km but is unable to reach targets beyond 3 km due to its less powerful rocket motors. R-3S, however, can only be used reliably at targets which are not paying attention or are unable to react quickly to a missile launch, but they can also be used to intercept targets at much further ranges than R-60.

When it comes to dumb-fire rockets, MiG-21SMT can carry S-5K 55 mm rockets and S-24 240 mm rockets. S-5K have a small warhead that is able to penetrate 150 mm of armour at 0°. However, due to their small warhead, they need a direct hit on the target in order to do any damage and even if they do connect, the damage is minimal to any armoured target. S-24, though, is a 235 kg behemoth, capable of taking out most targets with a single hit.

Combining its ability to pull high angle-of-attack on demand, excellent acceleration, high top speed and powerful dogfighting weaponry, MiG-21SMT is a potent air superiority dogfighter/interceptor. It allows the pilot to intercept any target, quickly get on its back and stay there, while also giving the user a safety net in the shape of its acceleration that enables it to break from any engagement with ease. It is recommended to stay at low altitude and not use full elevator if not in a dogfight. For air-to-air combat, the 4 x R-60 setup is the most versatile, albeit the 2 x R-60 and 2 x R-3R setup will allow you to get the most out of head-on scenario. If going for the latter option, make sure to create a keybind to switch between the different missiles using the Weapons selector mechanic. Overall, the MiG-21SMT is a versatile plane adaptable to any playstyle.

The MiG-21SMT is equipped with a Sapphire-21 search and tracking radar. The radar is mounted in the nose of the aircraft.

The MiG-21 was a supersonic interceptor aircraft designed by the Mikoyan-Gurevich Design Bureau (Mikoyan OKB) located in the Soviet Union. The development of the aircraft began in early 1950's, when Mikoyan OKB finished their first design of the aircraft designated as Ye-1. However, the prototype was quickly determined to be too under-powered, and led to the a redesign of the aircraft, designated Ye-2. Both of these aircraft and the prototype to follow had swept back wings, such as those found on the MiG-15. The first prototype to have the signature delta wings of the MiG-21 was the Ye-4. The aircraft made it's maiden flight on June 16th, 1955, and made its first public appearance during the Soviet Aviation Display at Moscow's Tushino Airfield in July 1956. The MiG 21 became the Soviet Unions first successful fighter and interceptor aircraft, it was lightweight, and had a powerful afterburner, allowing it to reach speeds of up to Mach 2, and was comparable to the French Dassault Mirage III, and American Northrop F-5 Freedom Fighter and Lockheed F-104 Starfighter at the time. However, the aircraft had a short range, which was worsened by the poor placement of its fuel tanks. Due to this, the development of the MiG-21 SMT began. The SMT variant of the MiG-21 contained more fuel tanks in the spine of the aircraft, which resulted in the aircraft being hard to fly as a result of the enlarged spine. The fuel tank however, did give the aircraft an increased range of up to 250 km (155 mi). The SMT variant also had an electronic countermeasures capability. The MiG-21 SMT is no longer in service.