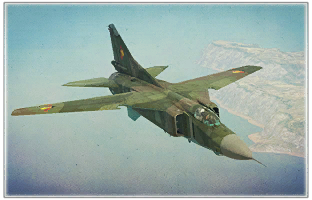 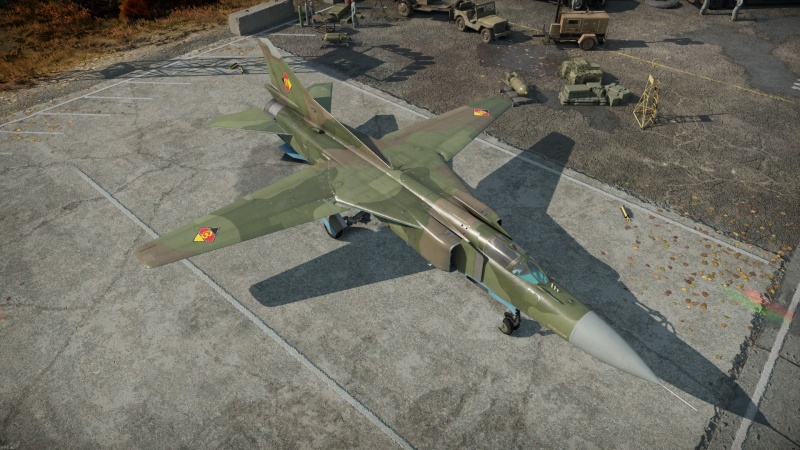 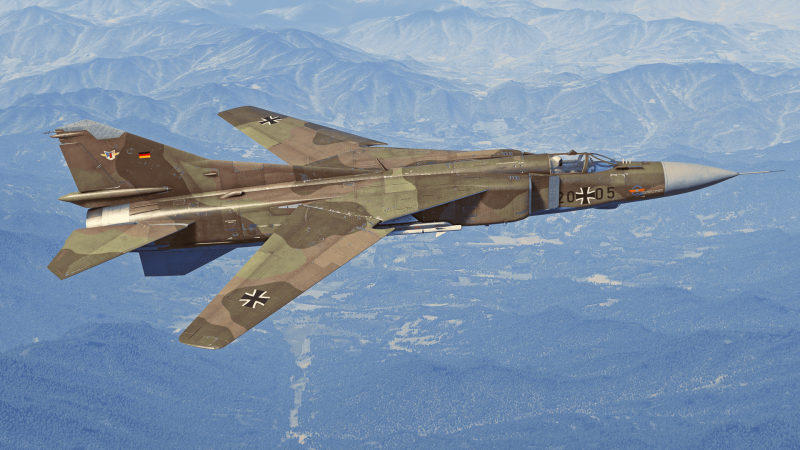 The ▀MiG-23MF is a gift rank VII German jet fighter with a battle rating of 11.0 (AB/RB/SB). It was introduced during Update "Winged Lions" as a reward for the 2021 Operation W.I.N.T.E.R. event.

The MiG-23MF is an export modification of the Soviet MiG-23M. In this modification, the avionics were changed in favour of more budgetary and somewhat simplified systems. The MiG-23MF was delivered to all the main countries of the Warsaw Pact, as well as to the Arab states of the Middle East, Africa, India and Cuba.

The MIG-23MF inherits all the main characteristics from the original - good top speed, a very good climb rate, a variable sweep wing and a large array of weaponry. The disadvantages also remained: a limited number of countermeasures, a limited number of weapon suspension nodes and rather mediocre manoeuvrability at transonic speeds.

The MiG-23MF (Germany) is armed with:

The MiG-23MF (Germany) can be outfitted with the following ordnance presets:

Low altitude, high speed, side of the map. Try to get as much speed as possible maintaining a very low altitude and go to the right if you want a more head-on engagement or to the left if you want a side/back of the enemy attack position (in a majority of maps players go to their left). Better used with a squadron, the MiG-23MF can eliminate several enemy aircraft if played right with 3 teammates and using the all-aspect IR-guided R-23T missile.

High altitude, high speed, together with your team, BVR. Fly along with your team, maintain a high altitude until all enemy aircraft are below you, then make surprise attacks on enemies that are busy, normally use the R-23R to destroy the high-altitude F-4s or F-104s with BVR missiles.

No matter which tactic you choose, it is recommended to engage your enemy from their front hemisphere, since you can carry all-aspect IR missiles. This way it leaves your enemy less time to react and dodge the missiles. Also, since both the R-60Ms and the R-23Ts have a relatively wide FOV, it is recommended to lock the enemy using your IRST before engaging the missile lock to slave the missile, and better utilise their wide FOV. Only use the R-60Ms at close range, around 1.5 km. They perform best under such range, and it also gives your enemy less reaction time to release the countermeasures, since R-60Ms are easily tricked by flares.

When in a 1-vs-1 situation, try to use your great low-speed performance to trick the enemy into low speeds, especially when against Phantoms. When your speed drops below 400 km/h, manually control the wing to the most frontal position to improve your manoeuvrability.