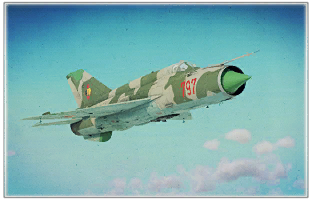 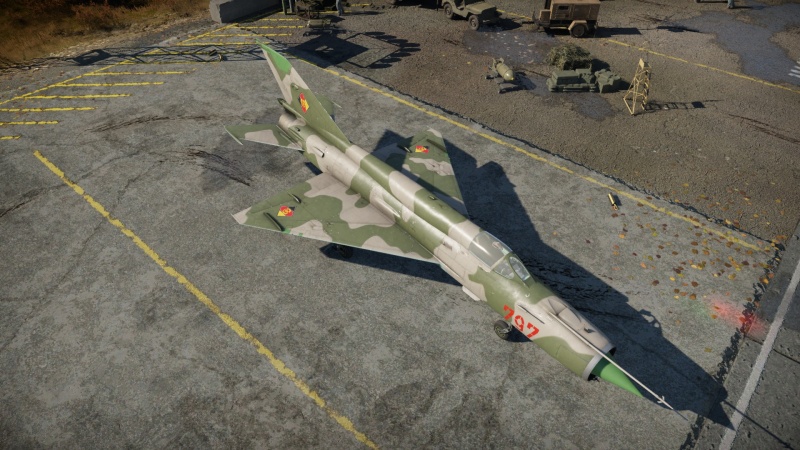 The MiG-21bis-SAU is an export version of the Soviet MiG-21bis for the DDR. It is a second-generation jet fighter with small upgrades over the original MiG-21bis found in the Soviet tree.

The MiG-21bis-SAU has very nice acceleration, especially at lower speeds, this allows for a quick takeoff roll and quick recovery of energy after a dogfight. It also accelerates the MiG up to and exceeds the airframe limits for top speeds at medium to low altitudes regularly. The MiG-21 has a delta wing, which gives it exceptional agility, nose authority, and raw AOA. Pilots of the MiG-21bis-SAU will find the aircraft capable of "pointing" the nose at the enemy aircraft in most situations, and the raw thrust the MiG has will also allow for a degree of stallfighting. However, as a delta-winged design, it will bleed a lot of speed in high AOA manoeuvres, so prolonged dogfights will not be in the MiG-21bis-SAU's favour against more conventional wing designs. 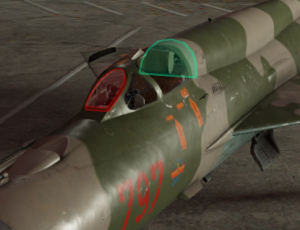 Armour layout for the MiG-21bis-SAU (Germany)

There is barely any armour in the plane to protect the pilot, fuel tanks, or engine. The little armour it has will not save you from a head-on attack with any enemy unless you are lucky.

As with other high-ranking jet aircraft, performance, countermeasures, and improved missiles are imperative for the MiG-21bis-SAU. These will allow pilots of the MiG to both survive longer and deal more damage to the enemy team.

The first modification recommended to unlock is Flares/Chaff, at tier 1. Then Compressor for extra acceleration. Afterwards, gaining both the R-3S and R-3R modifications, plus Airframe will lead up to tier 3 modifications. The R-13M missile is recommended as the first modification for tier 3, followed by Wings Repair and Offensive 23 mm. This will allow tier 4 research, and the R-60MK, an all-aspect IR dogfight missile. Fuselage repair, New Boosters, G-suit, Engine, and Cover will finish off performance mods and give MiG-21bis-SAU pilots the best performance possible in the aircraft. Bombs, Rockets, and EFS can come in any order, as the MiG-21bis-SAU is primarily focused on air-to-air combat.

The MiG-21bis-SAU (Germany) is armed with:

A choice between two presets:

The GSh-23L cannon will be familiar to pilots which have already flown the MiG-21MF.

It has relatively low velocity with a high fire-rate, therefore it is recommended for pilots to engage enemies at relatively close range, or enemies that are travelling at a fairly slow speed. Pilots should be mindful that with the ammo capacity of 250 rounds, this gives a trigger time of roughly 4.4 seconds, so trigger discipline will help the aspiring MiG-21bis-SAU pilot. The GSh-23 has high damage output, so even a few rounds will usually cripple or destroy enemy aircraft.

The MiG-21bis-SAU (Germany) can be outfitted with the following ordnance presets:

The MiG-21bis-SAU can be outfitted with a variety of air-to-air and air-to-ground weapons. The R-3S and R-3R missiles are very basic missiles, both pulling a maximum of 10Gs and with very limited range. The R-3S is the IR version, while the R-3R is the SARH (Radar) version. The R-3S has very a negligible use case, as the MiG-21Bis-SAU comes with two R-13M stock. It can be used if the pilot simply wishes for two extra missiles however. The R-3R is more useful for pilots that wish to have the capability to engage enemy air targets at a further range headon, though compared to other SARH missiles of the rank, such as the R-24R or AIM-7F, it lacks the potency to reliably dispatch manoeuvring targets. The next missile carried is the R-13M1, which is the missile carried stock and one of the two recommended for use. It has greater range than the R-60MK, especially at high altitude, though it is a less manoeuvrable missile. The R-60MK is the final missile carried by the MiG-21bis-SAU. It is a highly manoeuvrable, all aspect missile perfect for use in close in dogfights. It lacks the range of contemporary missiles such as the AIM-9G or the previously mentioned R-13M1, however it is highly manueverable and will begin quickly pulling off the rail, hitting most targets within around a 2 km area in front of the aircraft. The recommended loadout for most missions will be either 6 of the R-60MK, or two R-13M and 4 R-60MK using the custom loadout feature to give a mix of ranged weapons and more manoeuvrable, dogfight missiles.

Although the primary focus of the MiG-21bis-SAU is for air combat, it is also able to carry a limited selection of anti-ground ordnance. This includes a selection of 100, 250, and 500 kg bombs, along with the ZB-500 Incendiary bombs. As for rockets, it carries the S-5K and S-24 rockets. If pilots wish to use the MiG-21bis-SAU for ground strike, the S-24 rockets are a good choice as the plane also has CCIP for the rockets.

The MiG-21bis-SAU will feel similar to the preceding MiG-21MF to its pilots, with even quicker acceleration and higher top speed. When playing the MiG-21bis-SAU, it is recommended to keep in mind some of the strengths and weaknesses of the aircraft. As a delta-winged design, similar to the Mirage family or Draken, the MiG-21bis can pull exceptionally hard, and can effectively "point" the nose wherever its pilot wishes. On the other hand, whilst doing so, a lot of speed is lost and sustained turning will eventually rob the MiG of the energy it had going into a fight. Therefore going into sustained dogfights is not recommended, especially against planes such as the F-5, MiG-23/27, or F-14 Tomcat. All of these planes will have much better energy retention in a sustained turn than the MiG-21bis-SAU, and in a sustained turn will eventually simply have a decisive energy advantage over the MiG. Therefore it is recommended to use the MiG-21s ability to pull inside of enemy aircraft to attempt to fire on the enemy aircraft. If unable to do so, the MiG-21bis should attempt to use the excellent acceleration to reset the fight and try again.

When on the defensive many of the same rules apply. it is recommended to run either flares or mixed countermeasures depending on playstyle. Chaff will help decoy radar-homing missiles such as the AIM-7 or AIM-54, but if pilots prefers flying low, terrain can serve that purpose instead and the extra flares can definitely be useful with standard countermeasures. As previously stated, delta wings bleed a lot of energy while turning. This can be very useful when defending against enemies with better energy retention, as a good MiG-21bis-SAU pilot can use the speed bled by manoeuvres to cause the enemy aircraft to overshoot, and then attempt to use the gun or missiles to take out the enemy. This is the preferred way to go defensive in the MiG-21bis-SAU, as oftentimes most of the enemy aircraft have better energy retention and are usually relatively easy to force an overshoot against.

The one area the MiG-21bis-SAU has an issue with is in BVR (beyond-visual-range) combat. The only radar missile the plane receives is the R-3R, which pales in comparison to the R-24R or AIM-7 that are now very common in high rank air matches. Attempting to challenge planes such as the MiG-23MLD or F-14A at long range and high altitude is not recommended, the MiG-21bis-SAU excels in close range combat and every attempt by pilots should be made to close the range to enemies, and then using the arsenal of shorter ranged, but still highly potent weapons to finish off enemy aircraft.