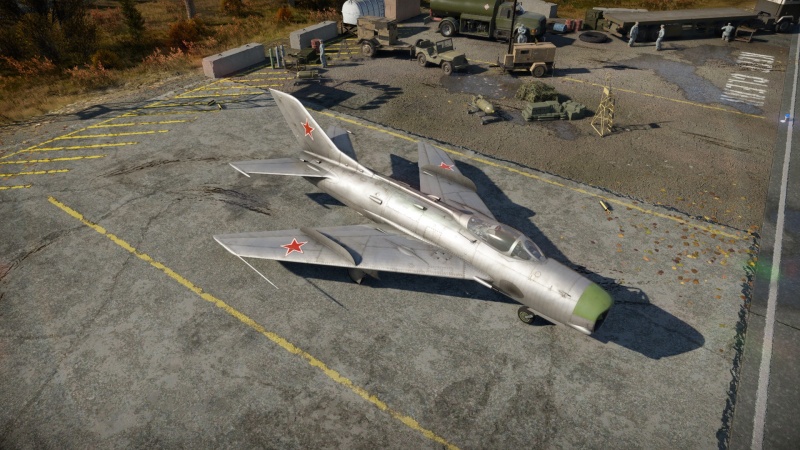 The main advantages of the MiG-19PT are its exceptional acceleration, great energy retention in a straight line and the very strong climb rate. Aside from the top speed, the aircraft has the raw performance to at least keep up with more modern jets.

However, the plane is weighed down by its somewhat inferior manoeuvring energy retention, bad low speed manoeuvrability and poor high speed handling. Compression at high Mach numbers slows the roll rate significantly and makes the rudder nearly entirely unresponsive, though MiG-19PT generally has a very responsive elevator. Despite how the acceleration can make up for it, be careful not to turn excessively, as that will bleed much speed due to the poor manoeuvring energy retention.

The performance of the plane doesn't suffer too much when it's stock. It can still out accelerate Phantoms and climb from sea level at 1,100 km/h up to 10 km in a single zoom climb without any modifications.

The MiG-19, like most jets, cannot fly well with damage. However, the wing spars can be somewhat sturdy, able to absorb several 20 mm or 12.7 mm rounds, perhaps allowing you to return to the airfield safely to repair. One benefit of the MiG is that the elevators are separate to each other in the damage model, and therefore a hit to the tail causing an elevator loss isn't the end of the world, since the remaining one is good enough to continue the fight. The elevators can also act as damage absorbers, taking the brunt of otherwise lethal damage. Occasionally, you may find that a missile has struck the plane, blowing off an elevator but leaving the plane still flyable. Another point to note is that loss of oil in either engine will rapidly cause engine failure, so it is best to return to base ASAP when damaged.

The MiG-19PT is armed with:

The MiG-19 carries two 30 mm NR-30 cannons, mounted in the wing roots. Each gun has 70 rounds of ammunition, making a total of 140 rounds. The NR-30 cannons are very fast firing so this is not much ammo, and you can't afford to spray. The guns however are extremely powerful, and only a couple of rounds hitting an enemy aircraft will severely cripple them, if not outright destroy them. The shell velocity is very high and you don't need much lead to hit a target.

The recommended belts for this aircraft are Ground Targets, they're more reliable than the Air Target belts and tend to take off wings and large sections, and destroy engines with one hit, in comparison to the air target belts which tend to spark or just damage external modules. The ground belts contain APHE rounds with 48 mm of penetration, but it is not really worth going for ground targets as the limited ammunition and high speed of the aircraft makes it very difficult to hit or destroy anything.

The MiG-19PT can be outfitted with the following ordnance:

The MiG-19PT can carry two heat seeking R-3S air to air missiles on under-wing pylons. The missiles have a 10G overload with 8.8 kg TNT explosive equivalent, which is enough to nearly guarantee a downed enemy aircraft if they hit. They travel at a speed of 1,000 m/s which is average for air to air missiles. The ideal use-case for the missiles is for a very low-speed or distracted enemy, as it is very easy to dodge an R3S.

The missiles are IR guided, try to refrain from firing at a target with friendlies in front of you, as the missile may switch onto a friendly. Enemies flying near the sun are also poor targets. It is not recommended to fire at any target pulling anything more than a light turn, since the missile will just lose track and miss.

Whilst it is possible to lock onto a prop aircraft with the R-3S, you usually have to be at nearly point blank range for the missile to lock on, so you may as well use your guns instead.

Despite the below-average accuracy of the S-5K rockets, these rockets can find success with the speedy characteristics of the MiG-19PT to combat ground vehicles. These rockets are best used in hit-and-run tactics. Half or all of the rockets should be fired in a single volley to increase the chance of a hit, and then return-to-base to rearm. It is recommended to attack at a steep angle so the rockets has a better chance to hit the roof of a tank, which are not well-protected. It is also recommended to engage an attack on the rear of a tank.

The MiG-19PT can be an excellent bomber at low altitudes for its speed allows to escape a 0.5 second time fuze with relative ease at high speeds and possibly avoiding SPAAs at low altitude.

Since the MiG-19PT has great vertical energy retention and acceleration, you should use this to your advantage. Taking the enemies vertical is the best move as they will quickly lose energy while you can maintain it. The airbrake is also a very effective tool, allowing you to stay behind someone if they try to force you to overshoot and the plane also rolls well enough that you can engage in rolling scissors if need be.

After taking its first flight in 1954, the MiG-19 became a worldwide sensation – it was the first mass-produced aircraft capable of breaking the sound barrier in horizontal flight after taking off from the ground. Although it was the most advanced combat aircraft of its day, the MiG-19 also had certain problems with manoeuvrability, and certain other improvements also took shape that were then used in the upgraded versions of the MiG-19. The fighter received an all-movable stabilizer that significantly improved its flight characteristics, enhanced control and braking systems, and new, more powerful 30 mm guns instead of 23 mm guns. One of the most interesting modifications was the MiG-19PT fighter-interceptor, which was developed especially for the installation of K-13 (P-3C) air-to-air missiles. This missile was strongly influenced by the extremely successful American Sidewinder, models of which the Soviet Union received from China. The MiG-19PT's flight tests were successfully completed in 1964. The K-13 missile was then used on an entire series of combat aircraft and remained in active use until the end of the 80s. The MiG-19 itself was modernized several times and participated in many armed conflicts. Over 2,000 MiG-19s were manufactured in the USSR, and even more MiGs were manufactured in China: over 4,500 units.