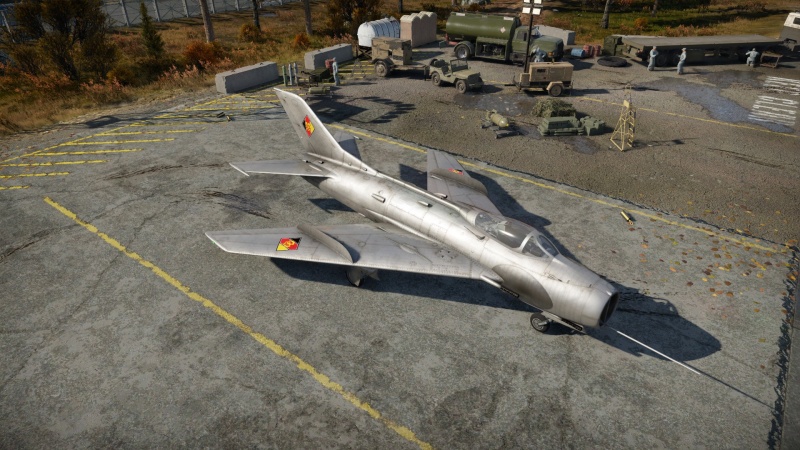 The MiG-19S 'Farmer' serves as a capable supersonic fighter boasting an incredible thrust-to-weight ratio, a highly competitive top speed, and lethal primary armaments. Thanks to the two afterburning turbojet engines, the MiG-19S is able to accelerate very well at all speeds and can use this thrust to achieve a considerable climb rate matched by nearly no other aircraft at its tier. In exchange for these great engines however, MiG-19S pilots will find their fighter's manoeuvrability moderately worse than their opponents, with the Farmer's rudder being especially poor compared to its contemporaries. Elevator authority is not terrible, but subsonic fighter jets will easily beat out a MiG-19S in a turning engagement.

Thanks to the plane's access to a drogue chute, as well as the relatively strong landing gear, the MiG-19S is capable of pulling of high-speed landings, with a touchdown at over 350 km/h being easily possible. The plane's high thrust-to-weight also allows it to take off quicker than most other jets it will find itself with and against.

As is typical of more modern aircraft, the MiG-19S does not take damage well. Though the pilot is well-protected against HE rounds from the front, almost the entirety of the plane's middle and rear fuselage is taken up by the MiG-19S's two engines which are thus incredibly easy to hit. Thanks to the plane's heavy reliance on the power of those engines, any damage to either or both of them causes massive problems to the Farmer. Loss of thrust harms the plane immensely, as the MiG-19's lack of manoeuvrability leaves it with little options against a persistent foe while it has damaged engines. The MiG-19 can also suffer from asymmetric thrust (when one engine is more damaged than another) causing the plane to struggle heavily at low speeds, due to the weak rudder potentially struggling to compensate.

The MiG-19S's 30 mm NR-30 cannons are highly devastating, rarely dealing anything less than a fatal blow thanks to their high calibre. They also boast a great muzzle velocity, most comparable to the British 30 mm ADEN cannon, aiding the pilot against high speed targets such as other supersonic jets. Their positions, all close to the nose of the aircraft, further improve the performance of these cannons.

However, the MiG-19S carries a paltry 70 rounds per gun which combines with the high fire rate of 1,000 RPM to punish poor aim and careless trigger discipline heavily, as well as reducing the MiG-19S's ability to engage in prolonged battles, forming one of the MiG-19S's core weaknesses.

The MiG-19S (Germany) can be outfitted with the following ordnance:

Farmer pilots will need to rely on the power of their engines above all else to come out victorious in battle. Little at top tier can match the raw power of the MiG-19S's dual afterburning engines, which allow the pilot the safety to deal with slower aircraft at his or her own pace, as the defender slowly loses their energy.

Though the MiG-19S's top speed is lower than some of its contemporaries, such as the F-4C Phantom II or J-7II, the Farmer instead boasts an immense thrust-to-weight ratio when the afterburner is active, allowing pilots to engage in energy-burning manoeuvres with faster opponents, who will struggle to keep up with the acceleration of the MiG-19 when recovering speed afterwards. A smart Farmer pilot will abuse this to turn seemingly untouchable faster opponents into easy prey. A reliable tactic when an enemy is on your tail is entering an upward spiral. The MiG's monstrous Thrust-to-Weight Ratio and turn rate will leave most opponents in the dust, forcing the enemy to either disengage or bleed away energy in a futile attempt to keep up. Pilots must keep in mind that some opponents like the Mirage IIIC, J35D, and to a lesser extent MiG-21 can simply turn inside the MiG-19S and shoot you full of holes, so this strategy should be applied with discretion.

Due to the MiG-19S's very low ammunition count, it is important for pilots to consider their shots carefully. The MiG-19S has an amazing climb rate and energy retention, even with high fuel loads, so it may often be better to save ammo, hitting the afterburner to climb away and attempt another attack run later. The Farmer excels in the late game when enemies have run out of missile armament and energy, so players should be mindful to keep an ammo reserve to capitalize on this period.

Though the MiG-19S's selection of secondary armaments is limited, it can nonetheless use those armaments alongside the high top speed to perform hit and run attacks on valuable targets, such as Anti-Air in Combined Battles.

The MiG-19S is equipped with a SRD-1 rangefinding radar, located in the nose of the aircraft. It will automatically detect other planes within the scanning area and display the range to the closest target. It is linked with a gyro gunsight and can help with aiming at close range.

The MiG-19 'Farmer' was the Soviet Union's first supersonic fighter jet to enter production, a successor to the MiG-17 which was developed itself from the MiG-15. The first MiG-19 entered service with the VSS in the mid-'50s. The MiG-19S is a later production variant of the Farmer, a day fighter with two RD-9B afterburning turbojets, outputting a hair over 7100lbs of thrust each when wet.

Compared to earlier variants of the MiG-19, the 'S' variant was equipped with provisions for rocket packs as well as bombs, giving it limited multi-role capability, though it did not have the radar of the MiG-19P, nor access to air-to-air missiles as with the MiG-19PT. For flight characteristics, the MiG-19S came out around 170kg lighter than the earlier MiG-19 variants and had a slightly redesigned airframe for improved aerodynamics.

On 10 March 1964, a USAF photo-reconnaissance aircraft RB-66 Destroyer was on a mission to observe a military exercise at the Gardelegen training range when it crossed over East German airspace. A pair of Russian MiG-19S Farmer-C fighters from the 24th Air Army base in East Germany were scrambled to intercept the photo-reconnaissance aircraft. Attempts to redirect the RB-66 failed even with warning shots fired from the MiG-19S fighters. Finally, Captain Vitaliy Ivannikov was given the order to shoot down the American aircraft which he successfully did. The three American crew members were captured and held for interrogation for four weeks before they were released.[1]

The MiG-19 did not see much combat under the Soviet flag. However, the MiG-19S, or rather a Chinese license-built MiG-19S called the Shenyang J-6, saw combat over Vietnam during the Vietnam War, flying in 1969 with the North Vietnamese Vietnam People's Air Force against USAF F-4 Phantom IIs. The Farmer scored a total of 7 victories against Phantoms over Vietnam.[2]