The P-59A finds itself in a unique position in War Thunder as a jet fighter sitting at rank IV, though just having turbojets compared to its battle rating buddies sporting propellers will not give it the sole advantage. Several turbo-props will be able to keep up, however, the maneuverability of this aircraft is where it shines and when the pilot utilizes rudder control and combat flaps, the P-59A can surprisingly outmaneuver many aircraft including British Spitfires. The 37 mm autocannon and the three 12.7 mm machine guns are sufficient enough to punch large holes through enemy aircraft or dismantle them piece-by-piece. Without any suspended ordnance, the P-59A will strictly be a fighter/bomber interceptor unless there is a corner of the map where the Airacomet can ground attack without the threat of ambush by enemy fighters as it will need to maintain its speed to be useful.

The P-59A Airacomet is quite an unusual jet with a number of unique and quirky characteristics. Firstly, it has a very low battle rating considering it is a jet. The reason for this is due to how poor its performance is compared to every other jet and most super-props (P-51H, F8F-1B, Bf 109 K-4, G.56, I-225). Secondly, the aircraft is unbelievably maneuverable and able to out-turn Spitfires at the BR with the correct usage of the combat flaps and rudder. These oddities make the Airacomet a very interesting plane to fly and the complete opposite of 90% of jets the player might've flown before. The P-59 has excellent maneuverability and decent roll rate. The very terrible acceleration is something to keep an eye on, but in a straight line, you will be able to catch other opponents. It will take a long time to get up to speed, but sooner or later, you'll catch your opponent if they continue to fly in a straight line.

As an early jet fighter, common carryovers from the propeller-driven aircraft were found in the P-59A which were eliminated in later aircraft in favor of more fuel or heavier suspended armaments. It was standard to envelop the pilot with armored plates especially in a fighter such as the Airacomet to protect from defensive fire or anti-aircraft shrapnel. To protect the pilot from attacks from the front, a 6.35 mm steel plate was placed both behind the offensive weapons and in front of the instrument panel in the cockpit. A 38 mm bulletproof glass was installed in the front windshield. Three different armored plates were placed behind the pilot's seat and headrest and were of varying thicknesses of 6.35 mm and 9.5 mm.

As the P-59A struggles for speed, it may have been a better option to sacrifice all of the armor but the bulletproof windshield in order to allow for the extra speed due to the weight savings. Unfortunately, this would not be realized until later jet fighters made this transition to forgo most if not all protective armor to squeeze out more power or more ordnance. 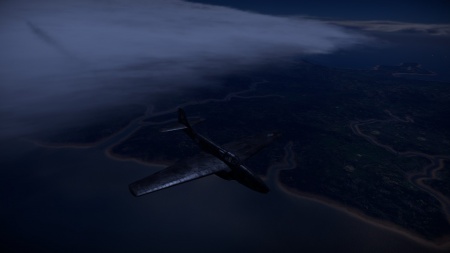 As found on earlier Bell fighters (P-39 and P-63), 37 mm autocannons tended to be heavy hitters with well-placed hits leaving only remnants of enemy fighters or bisecting bomber wings or fuselage. Though a heavy hitter, it is not without faults as it tends to work best in close range (>300 m) and when aircraft are showing the most surface area. Tail-shots have a bad propensity to spark or hit, but leave minimal or no damage (ricochet shot). Best chances for taking out an aircraft with this cannon is to wait until the enemy begins to maneuver and expose much of its wing or fuselage surface area, giving the 37 mm round the best chance to hit as close to perpendicular as possible thus avoiding sparking or a ricochet shot).

There are multiple ways the player can use the P-59A; energy fighter, highly maneuverable dogfighter, interceptor, or boom and zoomer. 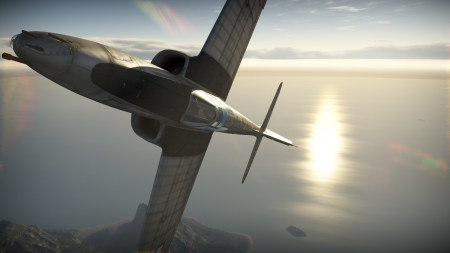