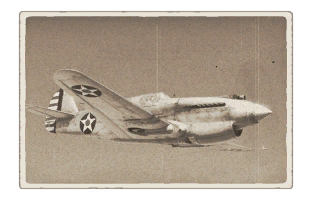 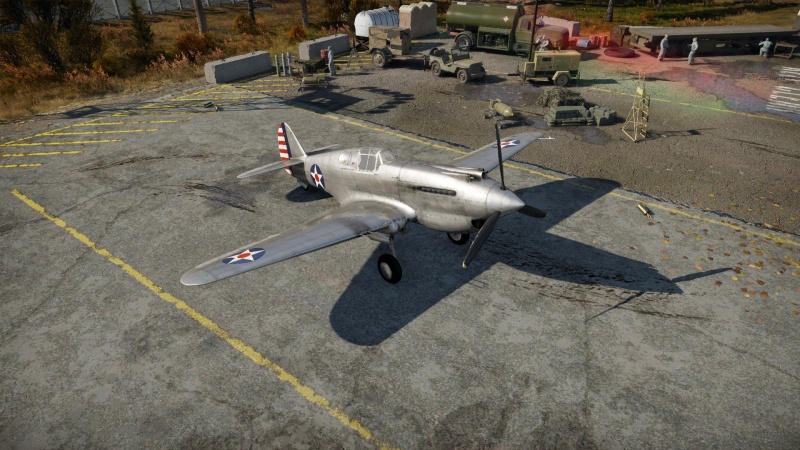 The P-40C Warhawk is a premium gift rank II American fighter with a battle rating of 2.3 (AB/RB/SB). It was introduced in Update 1.75 "La Résistance" and obtainable during the 2017 "Festive Quest" event. It was later made available as a battle trophy vehicle in the Warbond shop from the Battle Pass: Season I, 75th Anniversary of the Great Victory until the end of the Battle Pass: Season IV, "Fearless Voltigeur".

The P-40C is nearly identical in looks to its successor, the P-40E. However, the distinguishing part of the P-40C are the nose-mounted .50 cal machine guns. This allows you to have a denser cone of fire in contrast to other US aircraft at this battle rating.

The most plausible manner to use this aircraft is in the Boom & Zoom role, given its fast speed in a dive. In addition, the nose-mounted .50 calibre can help you preform certain attacks a P-40E pilot only could dream of doing. However, there are certain methods to using the plane, as it is an earlier iteration of the P-40.

The first method is to climb to altitude, and try to intercept enemy attackers and bombers. This tends to play in favour of the P-40C, due to its excellent top speed of 528 km/h (328 mph) at 3,800 meters (12,467 feet.) That being said though, you are inhibited by its relatively slow rate of climb of only 10 meters/second (32 feet/second.) On the contrary, once you reach altitude, Boom & Zoom as much as you want against bombers, as your high dive speed will make it difficult for most gunners to target you. In addition, you have a nice turn speed of 21 seconds, which can allow you to snap over on some opponents with relative impunity. If you do find yourself fighting in the vertical, flaps will also be of use to you, as they do have a decent speed tolerance before they snap off.

The Germans have the most planes that can give you a problem, due to the vast majority of them having 20 mm cannons. Most notably are aircraft like the Bf 110 and the Bf 109 E-3. You also do have to worry about aircraft like the Bf 109 F-1, which has a 20 mm cannon in the propeller hub. While it is unlikely, you may also face the Fw 190 A-1. Most German planes will have a significantly better climb rate than you and be able to energy fight you more efficiently. As mentioned earlier, most German planes boast much heavier firepower than you, which renders you at a disadvantage in punching power.

Most Soviet planes will also give you a run for your money. Almost all of the Soviet planes boast only nose-mounted weaponry, giving them a significant advantage over most allied planes. The most common enemies to worry about are any plane with the prefix "Yak". Perhaps the most common cause of US teams being defeated by the Soviets, is the fact that they head on an IL-2. Never under any circumstance head on an IL-2.

Heads up for German and Soviet pilots! While aircraft like the Bf 110, LaGG-3 and the Yaks have nose-mounted weaponry, an experienced P-40C player can still make you pay dearly in a head-on. If you find yourself in a head on with a P-40C, fire a short burst, then hit the deck to avoid being hit by return fire. This is especially true with the Soviets due to their wooden airframe.

The P-40C Warhawk, known as the Tomahawk IIB in British service, was an improvement of the P-40B. The P-40C added provisions for underbelly fuel drop tanks and bomb shackles, added self-sealing fuel tanks, and also featured numerous minor improvements. All of these changes increased the weight of the aircraft, which had already suffered from a low power-to-weight ratio.

In the European and Mediterranean theaters, the P-40 was used heavily from 1942-1943. Notably, the first confirmed shoot down of a German aircraft by a USAAF unit occurred on 14 August 1942. 2nd Lt Joseph D. Shaffer of the 33rd Fighter Squadron, intercepted a Focke-Wulf Fw 200C-3 maritime patrol aircraft that flew over his base in Reykjavik, Iceland. Flying a P-40C, he damaged the Fw 200, which was finished off by a P-38F Lightning. P-40s were used heavily during the African Campaign, especially during Operation Flax; this operation resulted in large numbers of Axis transport aircraft shot down, along with many fighter aircraft.

In the Pacific theater, the P-40 was one of three types that did the most to curb the Japanese air power in the early war, along with the P-39 Airacobra and the F4F Wildcat. It was the most numerous fighter aircraft in service with the USAAF in that theater from 1942-1943.

In the China Burma India Theater until 1944, notably being used by the American Volunteer Group (AVG) - known as the Flying Tigers. In that theater, the P-40 was used to establish complete air superiority over China, and was also used to attack ground targets such as bridges.