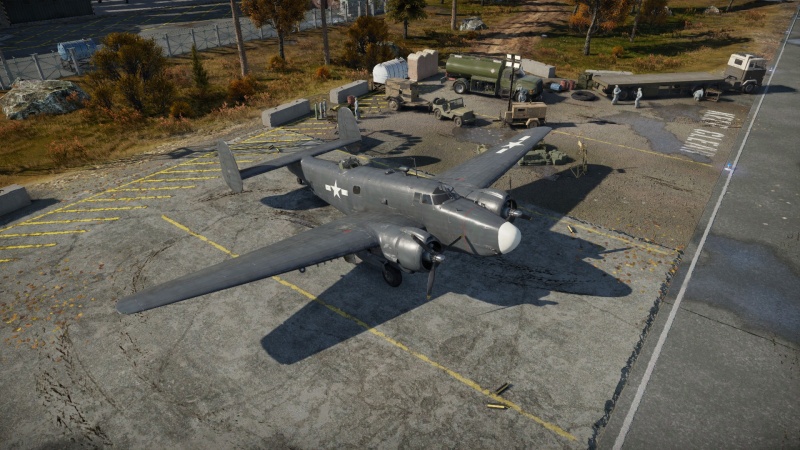 The PV-2D Harpoon is a premium gift rank II American bomber with a battle rating of 4.3 (AB), 3.7 (RB), and 3.3 (SB). It was introduced in Update 1.67 "Assault", during the 2017 World War Two: Chronicle event, unlocked after obtaining 6 Chronicle Awards. It was later obtainable at the end of the 2019 Operation "Shipyard" by buying a "Shipyard" trophy.

The PV-2D is armed with:

The PV-2D can be outfitted with the following ordnance:

The PV-2D is defended by:

The PV-2D Harpoon is a bomber and should be played as such. Its gigantic and versatile payload options allow for enough power against ground/naval targets and bases. The eight nose-mounted 12.7 mm machine guns deal excellent damage, and can be used offensively with the dorsal turret able to point forward. Though the gunners provide ample top and bottom protection, the tail of the vehicle is a blind spot to the two turret gunners and thus a tailing pursuant would be a priority threat.

It is also viable for bomber hunting due to the bomber spawn and its offensive armaments. Engaging unsuspecting fighters is also good, provided that you utilise BnZing and extend away. If your nose guns are out, consider using your dorsal for emergency shooting. Without an arrestor hook, you must land on carriers with some risk. Approach low and slow, use your flaps to slow down more and land on the deck without deploying your gear. Your plane won't break, the fuselage and engines will eat the brunt of impact. Same applies to landing on ground, you can do a soft belly landing without dying.

If you do engage, try to drag the enemy to ground level. Dragging hostiles down is great for your team to pick off, and you can force pursuers to your tail by diving down. Dogfighting is not encouraged, but it can turn on a dime occasionally.

Yak-2 KABB: Do not think that the PV-2D can confidently out maneuver this plane just because it is twin-engined. The Yak-2 has an amazing turn rate for a heavy fighter, thus the PV-2D must avoid turning with it, if not dogfighting with it in general. It bears a pair of ShVAK cannons that can easily damage vital parts like engine or cooling systems. It has green camo, greatly resembling an Me 410 but with an H-tail like a Bf 110's.

ZSD63: Though it is hard to identify specific SPAA vehicles on the ground from the air (especially when they are shooting tracers at the plane), if a ZSD63 is identified, avoid it at all costs and do not attempt head-ons with it, ever. It can easily snap a wing off by causally putting a short burst in the PV-2D's flight path. Don't even get close to it unless it is occupied with another friendly or if the PV-2D is equipped with a bomb that it can use. One identifying feature of the ZSD63 is its rather boxy and tall hull with a geometric turret sitting at the back, slightly similar to a Wirbelwind's. The firing manner is also distinctive: the sound and green tracers are very rapid, much like a buzz saw, but then it will remain silent for half a minute reloading. Note that an experienced ZSD player will hold its fire or shoot in single salvos with long halts between, making it look like that it's reloading. Armour-piercing belt is recommended since their high penetration can tear through the ZSD's armour with ease and knock out its crews.

After the success of the Lockheed Hudson, Lockheed sought to introduce another bomber named the Ventura based off their Model 18 Lodestar transport aircraft. Though similar to the Hudson, the Ventura was a lot bigger. The Royal Air Force adopted the plane under the Ventura name, and the United States Army Air Force (USAAF) adopted it as the B-34 Lexington. Though the Ventura was faster and could hold twice as many bombs than the Hudson, the Royal Air Force did not like the plane very much and replaced them with Mosquitoes, the surplus Venturas sent to Coastal Command. America's usage of the B-34 Lexington was complicated with a feud in air power between the USAAF and the US Navy (USN). The USAAF had a monopoly on manufacturing and command of land-based bombers, leading to naval activities such as anti-submarine duties with bombers shouldered by the USAAF rather than the USN, forcing the usage of float planes like the Catalina in the Navy's role. It wasn't until a compromise with the B-29 Superfortress in a naval manufacturing factory that the Army finally gave the Navy the aircraft and jurisdiction to act in their roles.

The Lockheed Ventura bomber, an aircraft the USN had an eye for, was converted for their usage. The adapted Venturas were adopted under the designation PV-1 Ventura for the navy, with special equipment for patrol bombing, increased fuel storage along with a decrease in forward defensive armaments, and the addition of search radar. The first PV-1s arrived in December 1942, then entered naval service in February 1943.

The PV-1 was an adequate bomber but provided some weaknesses needed addressing, most notably in that the increased fuel weight made it difficult to take-off without problems. The Ventura design was modified with an increased wing area in order to improve take-off and load-carrying capability. This allowed the aircraft to carry not only up to 4,000 lb of bombs but even rockets under the wings. The redesigned aircraft was accepted by the USN as the PV-2 Harpoon. More than 500 Harpoons were built in the course of the war, with several variants. The original PV-2 had five forward armaments whereas the PV-2D updated it with eight forward guns. The PV-2C and PV-2T models were models built for training.

The PV-1 was operated by three squadrons in the Pacific Theatre and flew bombing strikes against Japan. The PV-1 usually accompanied B-24s due to having a more sophisticated radar system. A few were also given to the Marine Corps fighter squadron VMF(N)-531 at the Solomon Islands.

The PV-2's design had a shaky start, issues with the wings wrinkling came off as dangerously problematic. Another redesign was needed, delaying the introduction into the Navy until early 1945, with the ones already delivered converted for training purposes as the PV-2C. When the Harpoons were finally shipped, it went as the PV-2D model, and these aircraft designs proved reliable and popular with the crews that used them.

After the war, the Venturas and its variants were eventually declared obsolete. A number were scrapped, some were given away to foreign nations during and after the war. A number of the aircraft still survive today in both airworthy and display-only conditions.