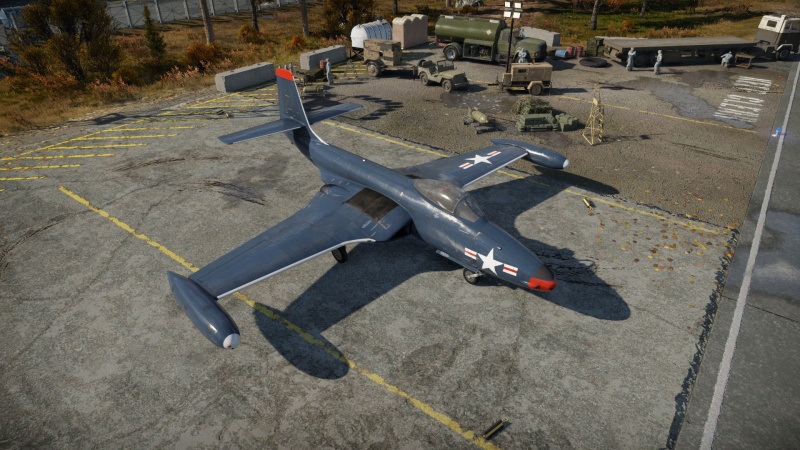 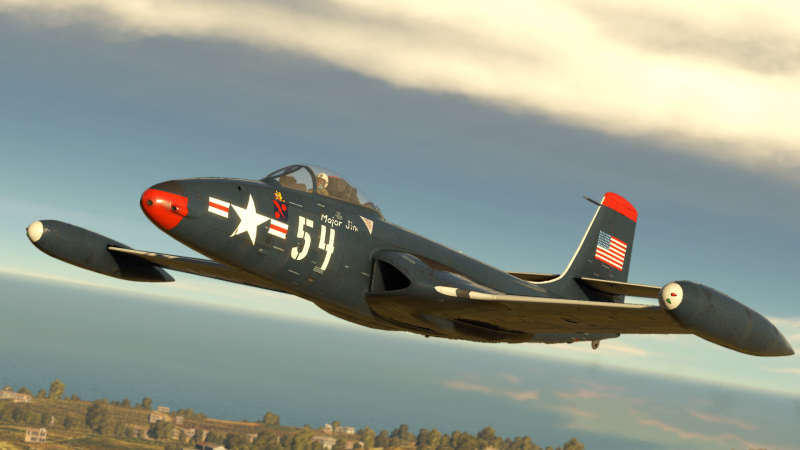 The F2H-2 Banshee is a rank V American jet fighter with a battle rating of 7.7 (AB/RB) and 8.0 (SB). It was introduced in Update 1.45 "Steel Generals". The F2H-2 Banshee is a fantastic jet-fighter with great overall speed and good manoeuvrability. It is most recognized for its ability to remain stable even past its speed limit break (933 km/h or 580 mph) and also for its fantastic high-altitude performance.

The Banshee is a very stable platform at high speeds. Speed warning appears at 940 km/h (584 mph), but it can reach over a 1,000 km/h (621 mph) and still not rip apart if flown carefully and kept it in a straight line.

Overall this jet is one of the best US early jets, its BR coupled with its very good performances make it a very pleasant aircraft to fly and grind the whole US air tree.

The F2H-2 can be outfitted with the following ordnance presets:

The F2H-2 is most effectively used as an energy fighter. It has great energy retention, turns well, and accelerates quite well once fully researched. However, the stock Banshee is terrible compared to super-props such as the Tempest Mk II, F8F-1B, La-9, and others. Therefore, it is recommended to climb at the beginning of a match to at least 4-6 km as the Banshee performs extremely well at these altitudes. However, keep in mind that evasion of superior planes such as the F8F-1B or the MiG-15 is key. Once optimal altitude is reached, Boom & Zoom can be employed. The F2H has sluggish controls at speeds below 482 km/h (300 mph) so try to maintain above that speed in level flight. But when facing super-props, low-speed stability coupled with an airbrake makes the Banshee an extremely good prop-killer. If you maintain a high speed during combat, you can outrun most jets at your Battle Rating.

It's best used as a support fighter in EVERY situation unless you are down-tiered and you are put against Ho-229's and Me-262's. In this case, you can become an aggressive fighter and easily score some kills. Although if you are put up against MiG-17's, MiG-15's and La-15's, best prepare yourself to side-climb and get behind your allies. Get some altitude and be patient to pursue MiG's that are either chasing Hunters or Sabres or an unfortunate bomber.

The F2H-2 is equipped with an AN/APG-30 rangefinding radar, located in the nose of the aircraft. It will automatically detect other planes within the scanning area and display the range to the closest target. It is linked with a gyro gunsight and can help with aiming at close range.