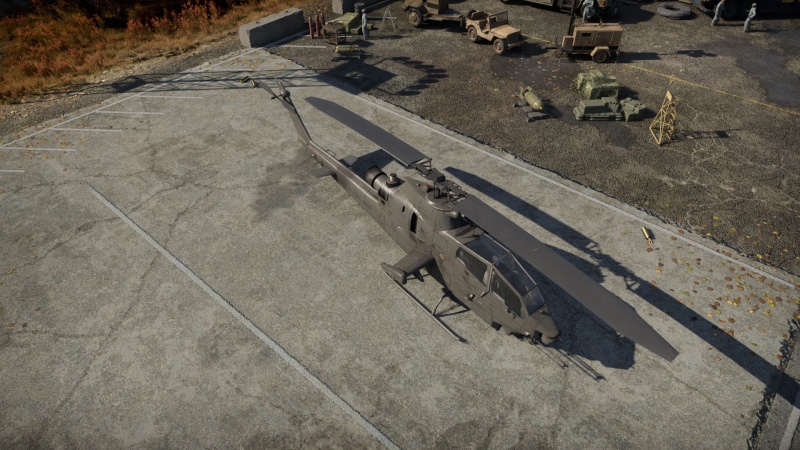 The AH-1F is a rank VI American attack helicopter with a battle rating of 9.7 (AB/RB/SB). It was introduced in Update 1.81 "The Valkyries".

The AH-1F compensates with its small and nimble size compared to the Mi-24 Hinds which are incredibly well armoured but are huge and slow in comparison. However, the AH-1F does not protect all of its critical components, such as: fuel tanks, transmission, propeller shaft & control surfaces with armour plating. Nor does it have armoured glass installed around the cockpit.

The AH-1F can be outfitted with the following ordnance presets:

When engaging other helicopters, the triple barrel rotary cannon makes short work of any adversary. Make sure to load it with the air target belt, aim for critical elements of the rival helicopters such as cockpit, engine and fuel tanks.

The AH-1F was born as the last iteration of the single engine variant of the Cobra helicopters. The development of this model can be traced back to the AH-1Q Huey Cobra, which was basically an AH-1G with several systems attached to it, such as the XM65 TOW missile subsystem (which allowed it to operate the BGM-71 TOW), M73 reflex sight and a Telescopic Sight Unit (TSU). All 92 of the AH-1Q's were AH-1G's that had been modified. After this model was tested, it was determined that the helicopters lacked the horsepower to perform NOE flight and a few upgrades such as a new more powerful T53-L-703 engine with a 1800 hp output, and several electronic changes were made to it. By this moment, it was known as AH-1S (Mod) or Modified. Eventually, all of the AH-1Q's were reworked and updated to AH-1S (Mod) or later variants.

The AH-1F Included both the Step I and II upgrades, alongside upgrades on its armament system, a laser rangefinder, an IR suppressor mounted on the engine exhaust, and a IR dazzler, mounted on top of the engine. One Prototype Model 249, a AH-1S with a 4 bladed main rotor system, was created to be sold to US Army as an armed scout for the Apache Helicopter with advanced sighting systems that could also carry Hellfire missiles but was not purchased. The Model 249 was also offered to Germany as a proposed Attack helicopter but was also not purchased.