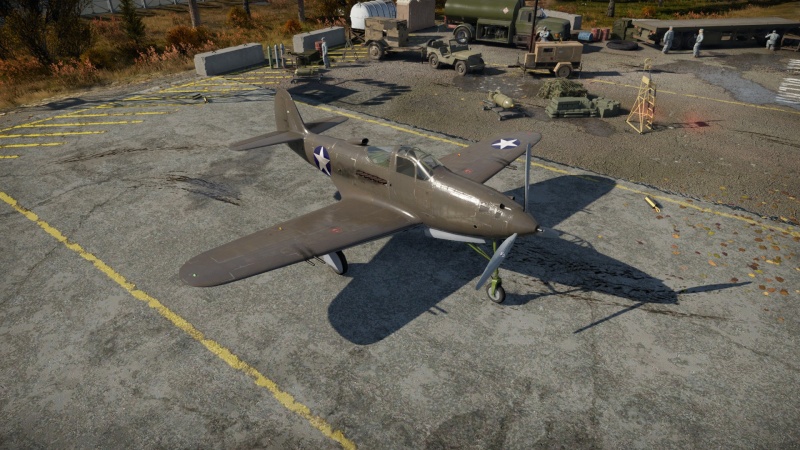 The primary purpose of a P-39 is that of a low-level interceptor. It lacks the high-altitude performance needed to engage strategic bombers or high-flying fighters, but is extremely competitive under 4,000 m and easily one of the best planes at its BR.

The P-39N-0 can best be described as a "Jack-of-all-Trades, Master-of-None" when it comes to flight performance. This is because the aircraft has middling performance depending on which aircraft you face at that battle rating or above, however the P-39N-0 is a very potent aircraft in downtiers.

The P-39 has a relatively easy stock grind as it's easy to fly and doesn't require "ace" skills to master it. Your first priority should be performance modifications, as you have enough firepower and ammo, so shooting down planes should not be an issue. M8 rockets are relatively useless; only equip them if you have no other CAS options. They can be effective at destroying bombers in a diving attack though, albeit the 37 mm should be enough.

For usage in Air Realistic Battles, the P-39 really does its best as a multirole fighter in terms of how you engage. for instance if you're fighting enemies such as Bf 109Es, Fw 109As, La-5s or the occasional Typhoon Mk.1, use your superior energy retention to trap them into an easy target. However if it is a manoeuvrable enemy such as the Spitfire Mk.IIb or A6M2, it is best to extend out and make repeated Boom-and-Zoom passes on them. Also do not take out the M8 rockets, they are terrible for taking out AI targets and weigh your plane down needlessly. Prioritize attacking the enemy with the .50 cal machine Guns over the 37 mm, as while the 37 mm carries insane destructive potential with each hit, it is artificially inaccurate.

You are only able to carry a very limited amount of ordnance. You can attack a tank with the 500 lbs bomb or get rid of light armoured vehicles with the rockets and strafe targets so the friendlies can see them. After the ordnance is expended, your role should be air superiority. Deal with other fighters challenging your dominance and try to deal with bombers. Always try to keep the element of surprise on your side. However, overall, the A-36 is preferable over the P-39 in mixed battles for ground attack.

The P-39 Airacobra was a single-engine fighter used on the Pacific and Eastern fronts. The aircraft was produced from 1940 to May 1944 by Bell Aircraft, and its first flight was on 6 April 1938. This aircraft was great in low-altitude combat, making it useful in naval battles for escorting torpedo bombers. The original idea for the Airacobra was a defensive interceptor that would protect American shores from the Axis powers. Destroying low-flying torpedoes and normal bombers was not a challenge for this aircraft as it could easily rip the wings and tail. The plane was originally sent to Britain but with technological developments, aircraft became more powerful and engagements were happening higher and higher in the atmosphere, so it was later sent back to the United States. The US then gave the P-39 Airacobra to the Australians, where it was used to patrol the northern shores of Australia. The aircraft was later fitted with bombs and more cannons, forcing it into a ground attack role, meaning it could now penetrate some tanks of the 1939-1942 era. Today, the P-39 Airacobra can be found in the National Museum of the US Air Force and numerous other museums around the world.

Bell's P-39 Airacobra was a WWII-era American fighter that was notable for its uncommon design: the engine was placed behind the cockpit, and the landing gear moved from the tail to the nose. The aircraft was adopted by five countries: USA, Britain, the Soviet Union, Portugal, and Australia.

The P-39N was the first variant to be mass produced, with the P-39N-0 getting a new V-1710-85(E19) engine and a 3-blade Aeroproducts propeller with a 3.15-meter diameter. Starting from aircraft #167, some fuel tanks were removed from the wings to reduce weight, and a connection for additional fuel tanks was installed under the hull. To further increase flight performance, Soviet engineers often removed the wing-mounted machine guns, leaving two nose machine guns and a cannon.

In this variant, Bell produced 2,095 aircraft. Most of these were sent to the Soviet Union on the US's Lend-Lease program. In November 1942, the USSR received the first Airacobras, and the fighters showed good results in battle manoeuvres at low and moderate altitudes. Many famous Soviet aces — such as Pokrishkin Alexander Ivanovich, Rechkalov Gregory Andreevich, Gulaev Dmitry Nikolaevich, and Kutakhov Pavel Stepanovich — piloted the Airacobras during WWII.