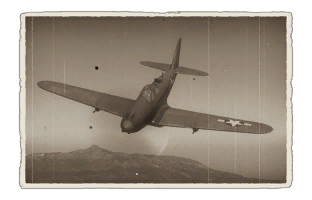 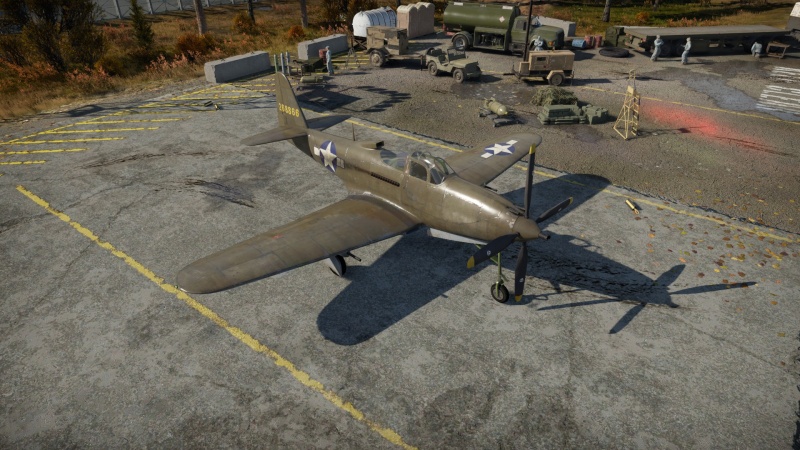 The P-63A-5 can be outfitted with the following ordnance:

This aircraft is a good all-altitude fighter and can be used as an interceptor. The A-5 can out-climb most of its opponents un-upgraded, although "side climbing" is recommended when the higher altitudes are reached. Its straight-line speed, especially at higher altitudes, is respectable, competing with Bf 109s of the rank. This aircraft has a poor turn-time at slower speeds, but as with most US aircraft, its high-speed performance is significantly better than the aircraft it faces, making it a good Boom & Zoom aircraft. The 37 mm gun improves damage to aircraft since the 4 x 12.7 mm Brownings are not greatly powerful at the higher tiers- the 37 mm gun compliments the 12.7 mm as a good bomber hunter, combined with the sleek profile of the aircraft. The aircraft is not intended, nor should be used, as a ground attack vehicle, since it can only carry one 500 lb bomb and the ammunition count for the 12.7 mm guns is not great. The 37 mm gun can be used in a ground attack, although some don't prefer this tactic as it reduces the ammo count as a whole for the aircraft, which is one of its limiting factors in combat. Tactically, the aircraft is good for small dives against turn-fighting opponents on the tail of your allies, from around 1,000 m or less above the target. Keeping any "side-climbers" down is normally good since the speed and rate of climb allow the P-63 to catch these planes and send them back down.

The P-63 Kingcobra was an improved version of the P-39 Airacobra. The P-63A was the first production variant, and production began in October 1943. The USAAF found the P-63 inferior to other designs, such as the P-51 Mustang, so it was not ordered in quantity. But, production began to facilitate export to the Soviet Union through the Lend-Lease Act.

The Soviet Union played a major role in developing the P-63, and it was tested heavily in Russia. The P-63A sub-variants were mostly developed due to Soviet feedback since the Soviet Union was the largest buyer of the Kingcobra. The P-63A-5 sub-variant incorporated more pilot armour and a fuselage hardpoint. The A-6 added two wing hardpoints and extra fuel tanks, and the 37 mm gun was moved forward on the A-9 due to Soviet feedback - increasing the ammunition load from 30 to 58 rounds.

The P-63A was not used for combat operations by the USAAF. Instead, they were often converted to target aircraft for aerial gunnery training. Most P-63s, though, were exported to the Soviet Union during the war through the Lend-Lease Act.

The P-63 was removed from the Soviet western front in 1943 to focus the units on the east for an eventual invasion of Japan. However, both Soviet units and German units reported the presence of P-63 fighters on that front. One Soviet account goes as far as to say that the entire 4th Guards Aviation Regiment (4 GvlAP) was converted to the P-63 in 1944 while officially flying the P-39. German accounts also detail the downing of P-63 aircraft by flak guns and fighter aircraft. The official Soviet records still claim that only P-39s were used against Germany.

In the time before the P-63s were transferred to the east, it had been proven as a capable fighter, although there is a widely believed myth that P-63s were used only in the ground attack role. The Kingcobra was able to achieve several victories over German aircraft at that time. In the Pacific theatre, P-63s were used during the Soviet invasion of Manchukuo and northern Japanese Korea. They flew ground attack, close air support, and escort missions in that theatre. The first Soviet air victory with the type in the Pacific was on 15 August 1945, when Lejtenant I. F. Miroshnichenko from 17th IAP/190 IAD, shot down a Nakajima Ki-43 Hayabusa IJAAS fighter off the coast of northern Korea.

The Soviet Air Force maintained large quantities of P-63 Kingcobras after the war, with P-63s remaining in service throughout the Korean War in the 1950s.