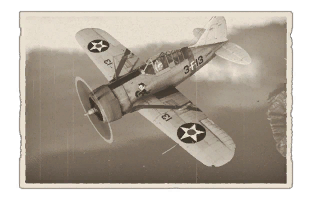 The John Thach's F2A-1 Buffalo is a Rank I American naval fighter with a battle rating of 2.0 (AB) and 2.3 (RB/SB) It was introduced in Update 1.31. It costs 400 GE. The plane is painted after the camouflage scheme of American pilot John Thach in the U.S. Navy, who was famous for the "Thach Weave" maneuver.

The Brewster F2A Buffalo was the first carrier based monoplane of the US fleet, made to replace the outdated biplanes in service with the US Navy. It had a 950 horsepower engine and two machine guns on the nose of different caliber. Many Countries, including the Finnish Air Force which was highly successful with the buffalo, ordered the Buffalo. By the time WWII started and the attack of pearl harbor, the F2A was outclassed by the Japanese A6M2 and Ki-43s.

The F2A-1 is a competitive machine, if using the proper tactic versus the proper enemy. The "Buffalo", as it is sometimes referred to as, can outrun biplanes and can out-turn most monoplanes. Its only draw back is low ammo count and unreliable armament, however its performance easily makes up for the lack in armament. As said before this plane will get a pilot used to the American style of aircraft of Boom & Zoom along with the particulars of .50 caliber machine guns usage.

Although the F2A buffalo fought only a few battles with the US Military, it fought important ones. In the battle of Midway, it was one of the main fighter planes of the US fleet (the other being the F4F Wildcat), it played an important role(along with the other planes)in the battle of Midway, and showed that the F2A and F4F where no match to the A6M, and where soon replaced by more advanced F6F and F4U Corsair.

Many Nations acquired the F2A in there air forces, the most successful country with the type was Finland. From January to February 1940, the Finns received there F2A-1s (Designated B239), in total they received 44 Buffalos. During the Continuation War the Finnish Air Force was highly successful with the type, they developed tactics that the Russians couldn't counter. One tactic they used was baiting, where 2 Buffalos are low and act as bait, as 2 others dive on attacking enemy planes. In the Continuation War, Squadron 24 of Finland, some sources state, had a victory ratio of 26. Buffalos of 24 squadron claimed 477 confirmed kills to 15 Buffalos destroyed.