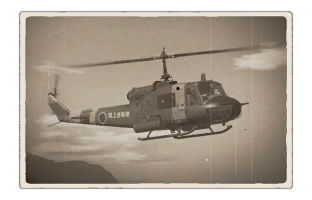 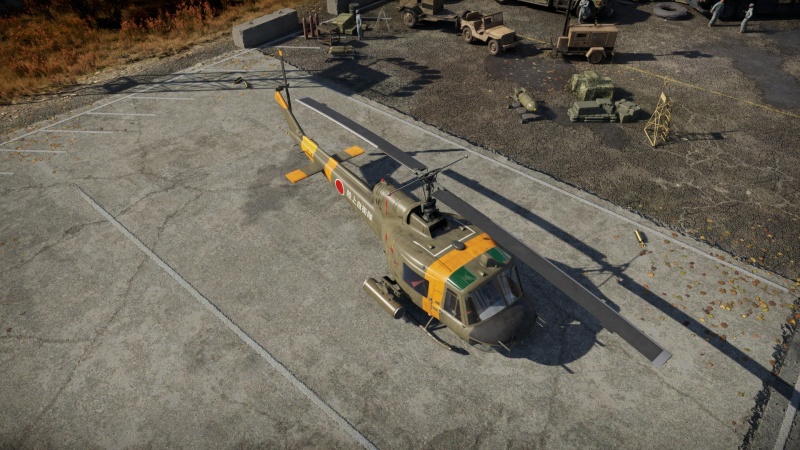 The ▅UH-1B Hiyodori is a rank V Japanese utility helicopter with a battle rating of 8.3 (AB) and 8.0 (RB/SB). It was introduced in Update "Starfighters".

The UH-1B does not fly with any protective armour or bullet-proof glass, which if installed would decrease the UH-1's ability to complete its mission. As such, the pilot must take this into account and fly the helicopter accordingly. Bull rushing right into the middle of a battlefield usually ends with disastrous results as the without armour, the Huey has nothing but thin metal fuselage coverings to protect the crew and vital equipment. The engine, transmission, main rotor and tail rotors are all exposed to fire from missiles, rockets, cannons and even small calibre machine guns. The pilot must be aware of their surrounds and work to fight from the enemy vehicles blind spots or weak sides, because a burning and crashed helicopter only pads the enemies' score-count. Pick and choose your battles to preserve the helicopter.

But the "thin metal fuselage" is still "metal", it would provide minor, temporary protection for the interior modules (i.e. fuel, transmission, engine, crew, etc). This means that calibres that are 7.62 mm and below could potentially be stopped by the fuselage for a few several hundred shots until the fuselage starts giving warning when it slowly becomes yellow or orange.

The UH-1B (Japan) can be outfitted with the following ordnance: