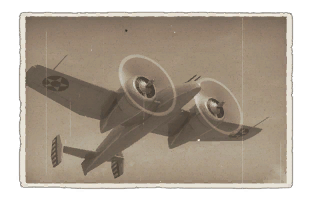 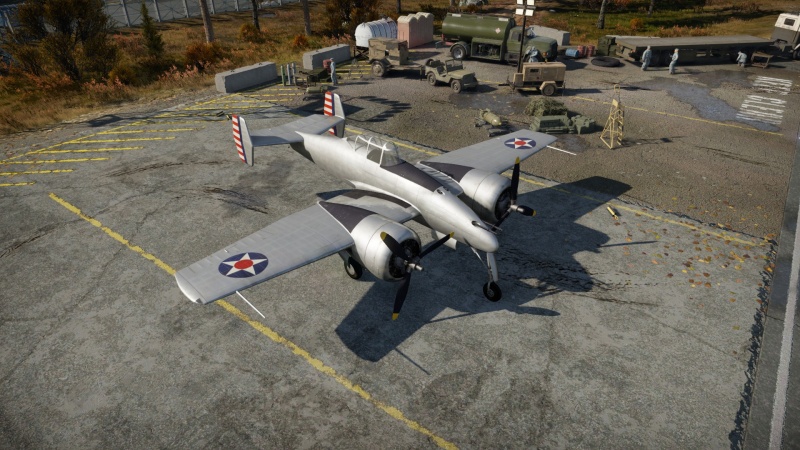 The XP-50 is a premium rank III American twin-engine fighter with a battle rating of 4.0 (AB/RB/SB). It was introduced in Update 1.31.

The XP-50 has great climb rate and acceleration, although it does tend to lock up at high speeds. It can easily maintain a 20-25 degree climb. Your engines will also commonly overheat, but they cool off relatively quickly. Low-speed manoeuvrability is excellent, especially when you have your flaps deployed.

Its excellent climb rate and acceleration make this plane great for energy fighting. It won't be hard to get altitude advantage upon the majority of your opponents, which this plane can out-climb.

Use your climb rate to be the highest plane of the battle, unfortunately, this aircraft does not have WEP, as so, it is best to climb at a 20-25 degree angle to get to altitude. Your priority targets are the highest enemies where you can pick and choose and work your way down to lower aircraft as needed.

If you notice you were out-climbed, don't hesitate to roll away and climb more as a dive is a risky trade with this plane. If an enemy climbs to catch you, make a 90° climb at full power and when they start to stall, try to boom & zoom them. Use your acceleration and/or climb rate if someone gets on your six to lose them. If you do lose energy, do not worry. You turn extremely well at low speeds with your flaps out and will out turn most things you fight.

Make sure to have a disciplined and accurate fire, since you will quickly chew through the ammunition. While you may only have 120 rounds total of the cannon rounds, it doesn't take a lot of hits to knock out enemy aircraft. Your guns are extremely accurate and they are nose-mounted. Gun convergence can safely be set to 800 m, however, accuracy is best when close in, around 200-300 m. It is recommended to take Air Targets belts for the cannons and the Universal belt for the machine guns to maximize the damage output for air-to-air engagements.

When attacking bombers, try your best to stay away from the rear as that is a very dangerous spot for your aircraft to attack from. The engines can easily be damaged by gunners if the shots are aimed properly so try your best to attack from the top or bottom or even peel off if needed. This aircraft has poor fire extinguishing and flying with one engine can be dangerous.

Practically at the same time the XF5F-1 Skyrocket carrier-based fighter was being created, Grumman Aircraft Engineering Corporation designers worked on the development of a promising interceptor, based on the XF5F-1, for the United States Army Air Corps. The prototype was given a company designation of Model G-46 and an army designation of ХР-50.

The USAAC issued an order for production of the new aircraft on November 25, 1939. Although the ХР-50 was similar to the XF5F-1 externally, a number of significant changes were introduced into the original layout. Unlike its carrier-based predecessor, the ХР-50 was not a low-wing but a mid-wing monoplane, the fuselage was significantly lengthened, the shape of the pilot's cockpit canopy was changed, and the tailplane span was reduced.

The plane was powered by two Wright XR-1820-67/79 Cyclone nine-cylinder, air-cooled engines, with a left- and right-handed reduction gear, producing a takeoff power of 1,200 hp. Due to the new engines installed, the shape of the nacelles and engine cowlings was changed.

The aircraft's armament included two 20 mm Hispano-Suiza AN-M2 cannons, with 60 rounds each, and two 12.7 mm Colt-Browning AN-M2 .50 cal machine guns, with 500 rounds each, mounted in the forward fuselage. In addition, the aircraft could carry two 100 lb (45 kg) bombs under its wing panels.

Instead of the XF5F-1's tail wheel, the ХР-50 had a nose landing gear. The plane's fuel tanks were self-sealing, and the pilot was protected just as he was in the Navy version, i. e. with the help of an armoured front bulkhead, an armoured backrest, and an armoured floor.

The XP-50 (Ser No. 40-3057) prototype got off the ground for the first time on 18 February 1941, with Robert Hall, a Grumman test pilot, at the controls. The test flights showed that the ХР-50 had a better controllability than the XF5F-1. In addition, the turbosupercharged engines ensured the ХР-50's much better characteristics at medium and high altitudes.

On 14 May 1941, during the 15th test flight of the ХР-50 prototype, the turbosupercharger of one of the engines was destroyed, the cause undetermined, and the turbine blades flying in all directions severed the line running to the hydraulic nose landing gear extension system.

Pilot Robert Hall successfully bailed out of the damaged vehicle. After the first prototype was lost, all work on the ХР-50 was discontinued.