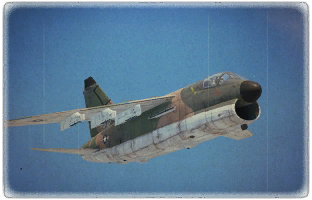 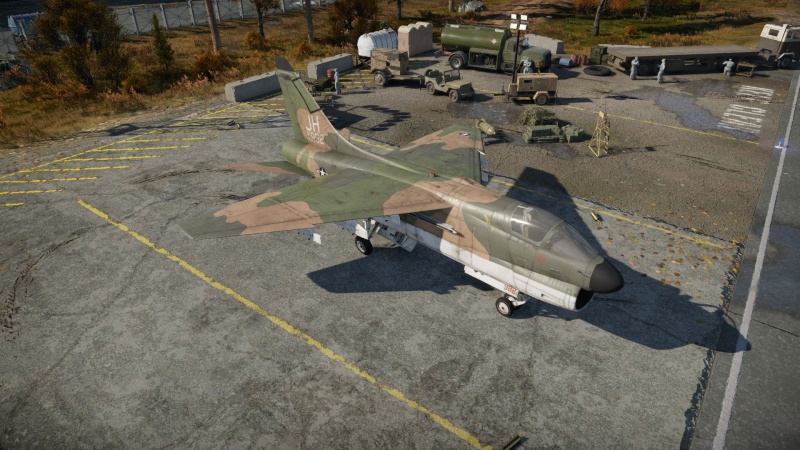 The A-7D is a light subsonic attack aircraft built by the Vought Aeronautics Division of LTV Aerospace Corporation. Military requirements specified that these aircraft be all-weather capable. This aircraft features a single nose-mounted M61 rotary cannon, six wing-mounted pylons and two fuselage-mounted pylons to which various bombs, missiles and rockets are mounted in a multitude of configurations to suit the pilot in command. Even though explicitly built for close air support and bombing missions, in a pinch, the A-7D attacker can scrap with any aircraft it may end up tangling with.

The A-7D can be a challenging aircraft to fly. As an attacker aircraft, its primary purpose is to deliver a payload to the target zone and leave. Though outfitted with Sidewinder missiles, these are more for defensive purposes or targets of opportunity. This stout attacker is relatively compact, and with all of its internal components crammed together, enemy fire can easily take out critical components in short order. Avoiding an air-to-air dogfight is the aircraft's best defence. 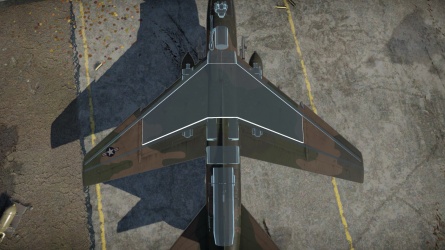 The large, self-sealing, wing fuel tank in the A-7D.

Flares are another defensive tactic available to A-7D pilots once they have upgraded their Tier I modifications. Packed with 120 flare units, the A-7D can fend off a flurry of infrared-seeking missiles. Though these are not guaranteed life savers, they may come in handy and give the A-7D pilot a second chance. One helpful tactic while behind enemy lines or in an area where enemy fighters may be thick is to activate the "Periodic Flares Release", which releases flares incrementally. Though this may bring notice of where the A-7D is, the benefit of automatically launching flares makes the enemy's job much more challenging to get a shot with infrared missiles.

Even with critical countermeasures for protection, the overall design of the A-7D leaves no space for error when taking a hit. Much of the aircraft's fuel tanks are clustered towards the centre of the aircraft and, unfortunately, do not feature self-sealing properties. A hole in the large tank will result in quick leakage of the fuel or continuously burning if it catches on fire. Damage to the fuel tanks typically becomes a critical blow for the aircraft. Getting hit is not always the end of the world; there are many times when pilots can limp their aircraft back to safe airspace or base for repairs.

The 20 mm M61A1 Vulcan is an excellent multi-purpose weapon that can fit into the A-7D's role. With the high rate of fire of 6,000 RPM, the M61A1 can lay down massive amount of fire that can ensure hits onto the target.

Due to the rate of fire, the A-7D only needs to fire into the enemy's path only for a moment that the enemy aircraft would be pelted with multiple 20 mm shells. If this does not instantly destroy the aircraft, more than likely a critical control component has been damaged that a follow-up shot is made easier against them.

The 20 mm shells are powerful for the ground-attack roles, with 53 mm of point-blank penetration with any belts loaded. A quick burst can destroy light pill-boxes in Air Realistic Battles, as well as penetrate some medium tanks via the weaker armour areas. Though the ground vehicles that the A-7D can encounter in Ground Realistic Battles are often more well armoured against the 20 mm power, modules can very easily be damaged with the Vulcan's rate of fire, let alone any shots towards the tank's roof armour.

The A-7D can be outfitted with the following ordnance presets:

The A-7D can carry an assortment of bombs and unguided/guided rockets that are familiar to players of the American attacker line, with the primary differences to preceding attackers being that the A-7D have a staggering 6 hardpoints on its wing which can mount suspended weaponry, including the ability to carry dual 20 mm M61A1 gunpods or dual 30 mm GAU-13/A gunpods, a scaled down yet still equally deadly variant of the GAU-8/A belonging to the infamous Fairchild Republic A-10 Thunderbolt 2, that can shred anything staring down its barrel. Finally the inclusion of CCIP that assists in the usage of the aforementioned weaponry completes the A-7D as a deadly CAS package.

Besides ground targets, the AGM-65A Maverick missiles can also be great for taking helicopters down in mixed ground battles.

When flying the A-7D in air realistic battles, the main challenge can be getting to bases or ground targets as most of the fight revolves around the centre of the map. To counter this, take some time to fly and possibly climb away from the map center where radar-equipped planes may be searching. Once you've made it to the side, look at your surroundings and determine which group of targets/bombing base will net you the most rewards with as little risk of being shot down as possible. The moment you've expended your ordnance, you have two options - stay and fight other jet fighters or go back to the airfield to rearm and repair. These two options have their risks and benefits:

In ground realistic battles, the A-7D is simultaneously a flying whale and a flying tank killer.

This aspect comes from that your attacker isn't very manoeuvrable. Still, the huge ordnance options allow you to take full advantage of the long flying periods that result from the large payloads and a large number of countermeasures.

You want to be aware of your surroundings and of any dangerous SPAA that may be an active mid-battle. Listen to your RWR, and visually check if any tracers or missiles may be headed your way. If you receive a lock warning take evasive manoeuvres and wait till the SPAA is taken out or that you get another chance to sneak up on the target to take them out.

Your AGMs and rockets can be your best luck at speedy attacks that require less time on attack slope that leave you as a sitting duck compared to bomb dropping. With the missiles, you can attain lock and quickly fire, then pull away to make sure you are in a safe position to reset and go in for another missile attack.

You can saturate an area with a huge number of rockets with rockets quickly from just about any altitude. If you have the weapon selection tool active, you can change the number of rockets fired at once, which can be very useful when you have to take out a single target with as little time in the combat area.

The A-7D Corsair II was the US Air Force version of the Navy's A-7 Corsair II. It was procured by the USAF due to the urging of the US Army, which wanted a subsonic aircraft to carry out close air support (CAS) missions for its ground forces. [1]

The A-7D had a number of differences from the earlier Navy Corsairs, due to different requirements by the Air Force. The TF-30 engine was replaced by a version of the Rolls-Royce Spey, called the TF-41. The TF-41-A1 version was used in the A-7D, producing 14,250 pounds of thrust. The two 20 mm cannons of the earlier Corsair IIs were replaced by the M61A1 rotary cannon. The avionics suite of the A-7D was also different from that of the earlier models; the AN/ASN-91 Central Computer was the centerpiece of the navigation and weaponry delivery system, which also featured the AN/APQ-126 radar, AN/AVQ-7 heads-up display, projected map display system, doppler radar, inertial navigation system, and a weapons control system.

Some aspects of the A-7D made it unique from all Navy variants of the Corsair II. It had a boom and receptacle in-flight refueling system, improved wheels, tires, and brakes, an ESCAPAC IC ejection system, and a new oxygen system. The US Navy A-7E shared many characteristics with the A-7, but these changes listed never made it to USN Corsair IIs. [2]

A total of 459 A-7Ds were built, with deliveries starting to the 57th Fighter Weapons Wing in 1970. Starting in 1972, the Air Force's 354th Tactical Fighter Wing operated A-7Ds from Korat Royal Thai Air Force Base in Thailand during the late stages of the Vietnam War. Four USAF A-7Ds were lost in combat and two more were lost to other causes during that conflict, with a total of 12,928 combat sorties. Towards the end of the Vietnam War, A-7Ds from Korat Royal Thai AIr Force Base saw combat over Cambodia against the Khmer Rouge in support of the Lon Nol government. The last combat mission in Cambodia by an A-7D occurred on 15 August 1973.

Starting in 1973, A-7Ds began to be allocated to the Air National Guard (ANG). ANG A-7Ds flew 34 combat sorties during the 1989 Operation Just Cause in Panama. The A-7D was fully retired in the early 1990s, having been replaced by the A-10 Thunderbolt, which first entered service in 1977.

In the early 1960s, the US Navy sought to procure a new naval strike aircraft in order to replace the A-4 Skyhawk. However, to ensure a fast development and reduce costs, the new machine was supposed to be based on aircraft already in service with the USN at the time. One of the aircraft manufacturers taking part in the competition - Ling-Temco-Vought (LTV) - quickly developed an aircraft on the basis of their F-8 Crusader by shrinking the dimensions of the new aircraft and taking away its supersonic abilities in an effort to further save on costs.

The decision to do this was met with success as LTV's design was quickly declared the winner of the competition and given the official designation A-7 and named 'Corsair II', signaling the lineage from the older WWII-era fighter bomber F4U Corsair (also built by Vought). The aircraft undertook its maiden flight in September 1965, with serial production starting in 1966. In the first production batch, close to 200 A-7A Corsair IIs were built with many seeing action in the ongoing Vietnam War.

Driven by the need to acquire a new strike aircraft themselves, and encouraged by the successes achieved by the A-7 in Vietnam, the USAF ordered the development of a separate Army variant in 1968, which would become the A-7D. Apart from vastly improved avionics, the A-7D also featured a more powerful engine and an M61 Vulcan cannon instead of two single-barreled 20 mm cannons.

The A-7D entered production in 1968 and continued rolling off the assembly line until 1975 with over 450 units being produced. It served until the early 1990s before being retired from active service.