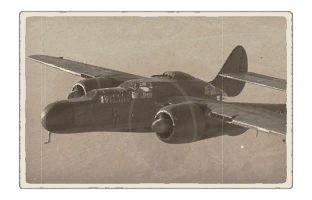 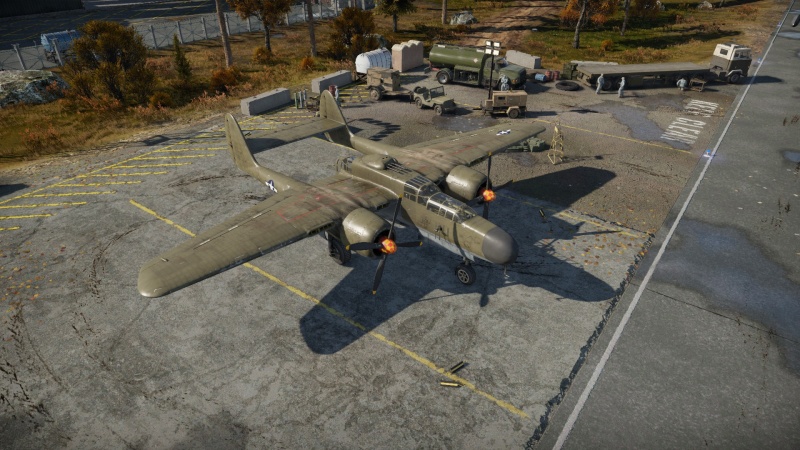 The P-61A-11 is a premium rank III American twin-engine fighter with a battle rating of 3.7 (AB/RB/SB). It was introduced in Update 1.57 "Battle March" as an in-game premium vehicle purchasable with Golden Eagles

The P-61A-11 is a twin-engine fighter, also known as a strike fighter in-game. It is excellent in bomber hunting and excels when used with Boom & Zoom tactics. Unlike the more advanced P-61C-1 variant, this initial production aircraft has weaker engines and fewer external suspended weapons.

While being a large aircraft, it is unable to effectively turn to fight and when doing so, rapidly bleeds any energy and advantages it may have. The two engines are Pratt & Whitney R-2800-10s. It will only be able to take off with a speed of around 169 mph (271 km/h) and requires a very long airstrip since it is a very heavy plane. 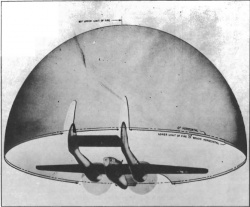 The 20 mm AN/M2 cannons placed under the belly are able to make quick work of any plane which stands in your way.

The P-61A-11 can be outfitted with the following ordnance:

The 4 x Browning machine guns are set in a remotely controlled dorsal turret controlled by a gyroscopic fire control computer which was operated by either the gunner or radar operator for both offensive and defensive situations. Turret defensive angles are limited to the upper plane of the aircraft as it can not aim any lower than the elevators. If an enemy plane is in the machine gun dead zone, you will need to change the position of the plane so the guns can acquire a firing solution, this can be accomplished by transitioning into a steep climb or dive. The P-61A-11 does not have defensive armament that provides essential protection from the low rear or belly attacks.

How to offensively Engage an enemy aircraft: Climb to high altitude and keep on a straight heading once you have seen the enemy. Overshoot the enemy plane, then perform a 180-degree turn. Make sure you stay on his tail and gradually descend. It is recommended to do something similar to a shallow descent, where you can keep speed and height to your advantage in case the enemy aircraft changes course and altitude. Do not perform a dive which requires you to dive straight down since you will rip the wings off and crash. Once you are within firing range, fire a short salvo from your cannons. A couple of bursts from the Black Widow are sufficient to easily rip an enemy plane to shreds.

How to perform defensive fighting: When you are being engaged by an enemy fighter, make sure you keep descending. Do not allow enemy aircraft to get lower than your elevator on the tail boom. You have no defensive armament to cover the belly or full-rear of the plane; these are your weakest defended parts.

The Germans have the most planes with more dangerous cannons, thanks to their Minengeschoß rounds, which punch through and explode inside an airframe, thus causing maximum damage to control surfaces. At your battle rating, you have the possibility of facing the Bf 109 G-6, which has a fast speed and nose-mounted weaponry that are large enough in calibre to shred your airframe. Perhaps the biggest threat to your plane is the Focke-Wulf Fw 190 A-4, which boasts four 20 mm cannons, which will reduce your plane to a burning wreck. While it is unlikely to see many at high altitude, the Messerschmitt Me 410 A-1 is also a viable threat.

Repeat after the following bold statement: do not head-on an IL-2 of any variant. As sluggish as they seem, the IL-2 will rip your aircraft to shreds due to the fast firing combination of machine gun and auto-cannon fire. The most common adversary that will be faced is any aircraft bearing the prefix "Yak"- most dangerous among them is the Yak-9K, which has a 45 mm cannon that can utterly obliterate your plane, and the Yak-9T, which has a 37 mm cannon that will do the same damage to your aircraft. The La-5FN is probably the biggest threat you will face due to its fast speed, ridiculously strong cockpit armour, climb rate, manoeuvrability and firepower. This is mainly given if a La-5FN pilot is using "Ground Target" ammunition, every third round fired is an Armor-Piercing Fragmentation Incendiary round, and every other round is either a Fragmentation-Incendiary Tracer or an Armor-Piercing Incendiary round. In short, the La-5FN has the biggest threat due to all the API rounds in the ammunition.

A view of a P-61A-11 pilot's instrument panel with a BC-1152-A pilots indicator portion of the AI Mk. X radar. (The BC-1152-A is the square box with the rectangular window just above the control yoke)