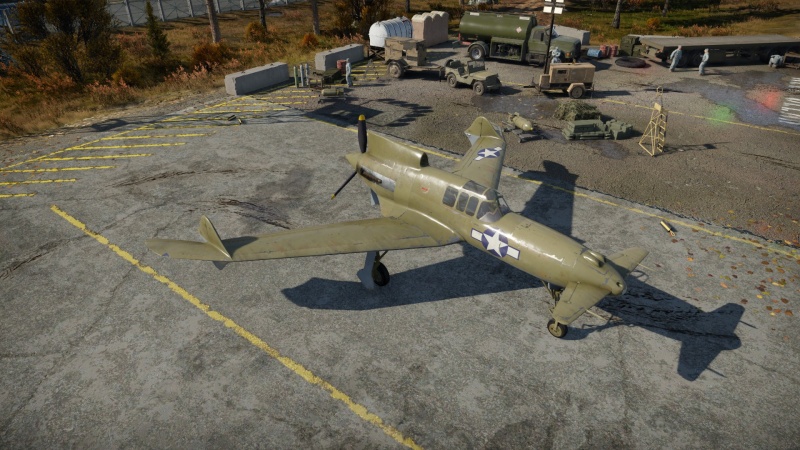 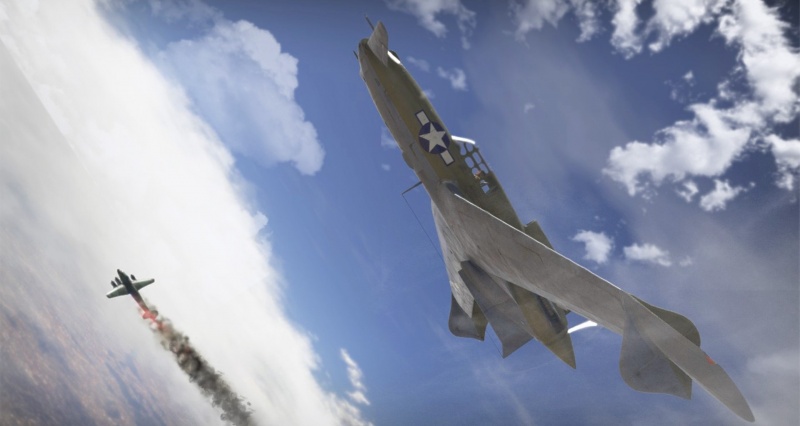 The XP-55's level speed is decent compared to other planes at a similar tier, climb rate is quite good, although the acceleration is mediocre. Turn rate at very low speed is not satisfying, but it gets better once the plane reaches higher speed (~400 km/h) and once it gets there it turns very well, even near the structural limit speed which is very high. Stalling characteristics is very different compared to other planes, especially during the flight after reducing the power, it tends to stall without dropping on one wing and with no lean to any side, it can be very dangerous during the landing on the airfield at low speed.

The engine can start overheating after a few minutes flying on War Emergency Power, especially on hot maps and when the player is using automatic engine controls, but it cools down fast once the power is reduced or after switching to manual engine controls and open the radiator. Also, when the XP-55 reaches a higher and colder altitude (above 4,000 m), the plane is noticeably faster to accelerate and the engine is less prone to overheating.

Perhaps the most distinctive characteristic of the XP-55 is its impressive energy retention. The plane has earned the nickname "the UFO" from the community due to its ability to dive into an enemy at an insane speed and quickly climb back to high altitude (up to 2,000 m) as well as remaining highly agile. This allows the XP-55 to tackle any target provided that it has an altitude advantage and pull off from them untouched.

While not a fully developed fighter aircraft, the XP-55 prototype initially only sported a 9.5 mm steel plate behind the pilot's headrest. Without any other protection, the XP-55 was susceptible to machine gun and cannon fire from all directions. While the headrest armour and the engine protected the pilot from the rear, there were not many stopping bullets from the front, sides, bottom, or top. Taking this fighter in a head-on with another aircraft is a mixed bag as the XP-55 has the perfect weapon configuration for it. However, the pilot is in an extremely vulnerable to inbound bullets. The aircraft's manoeuvrability can enable it to get some shots off and then manoeuvre out of the way.

Quite high climb speed allows the plane to gets high fast after the start of the battle, which makes possible at what this plane excels: boom & zoom capability. It can dive at really high speed and easily get back to the previous altitude. Its armament that is located in the nose of the plane, high pitch and yaw responsiveness makes head-on encounters not so hard, but the plane can be set on fire very easily when the player is not cautious. Overall, it can deal with encounters at a similar altitude and in most situations, only one attack and a few hits will be needed to destroy the enemy plane. The small profile of wings makes it harder to hit, which the player can used during evasive manoeuvres. The plane itself can also take some damage and still fly.

Its high level speed allows it to get away from most of the Japanese fighters, but it should not be overestimated since the XP-55's acceleration is not great. Japanese planes like the J2M series are fast and can catch the Ascender at low altitude, and they can also easily outclimb it.

Compared to German planes it is not so fast, a player needs to be prepared for facing them at similar or higher altitude, their Bf 109 series have better climb rate, and the Fw 190 series is as fast, although with worse climb rate. The latter family of German fighters should be avoided in head-on situation, because of their exceptionally powerful armament.

Against Italian fighters, similar tactics should be used to that one against the Japanese fighters: their planes are slower, with similar climb rate but an exceptionally good offensive armament.

While the XP-55 features mediocre protection for the pilot, it can be used as a bomber hunter to great effect. There are two main tactics for the XP-55 for bomber hunting: