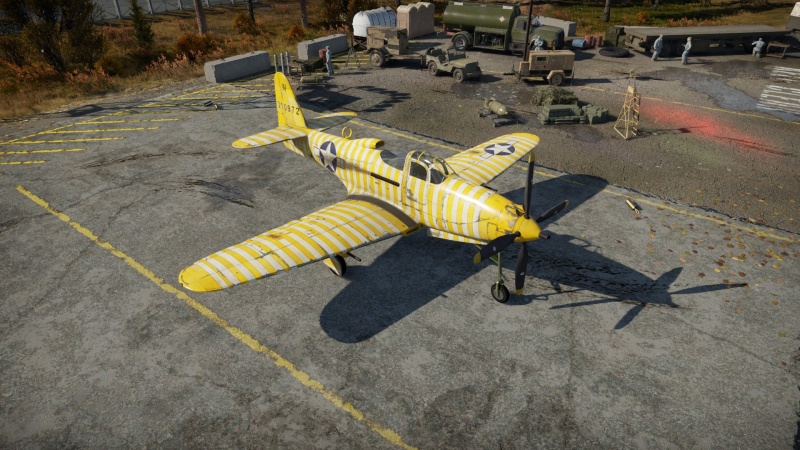 This aircraft is an improved version of the previous Kingcobra carrying the same armament and main gun. The aircraft is still a high-altitude interceptor/ energy fighter, with its turn radius slightly better than before. The quick dive speed and high energy retention allow the player, with the correct altitude, to engage opponents below numerous times using the high yo-yo method. This aircraft should not be used for ground attack due to its average ammo count.

The 37 mm M10 cannon is powerful. Aim carefully when firing, and do not fire too quickly, lest your gun jam and you lose your main weapon. A single shot to a wing or fuselage of an enemy plane will be all that it takes to bring it down.

The M2 Brownings can be used to inflict damage or to judge the range for your cannon shot.

The C-5 has slightly lower climb rate than the A-10. However, this is relatively trivial as both planes are generally evenly matched. Keep this in mind, though, when selecting your load out.

Head-on attacks are not advisable: the large cannon combined with the relatively weak M2s make for poor head-on accuracy. Only engage in head-ons if you are absolutely confident in your aim.

The Red Army Air Force's opinion of the P-63 was positive. Pilots noted the plane's high speed, good manoeuvrability, and powerful armament. The convenient three-wheeled chassis, coupled with efficient brakes, provided good conditions for taxiing, takeoff, and landing, and the plane's handling on the ground was excellent.