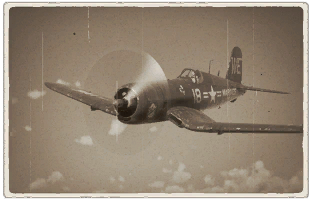 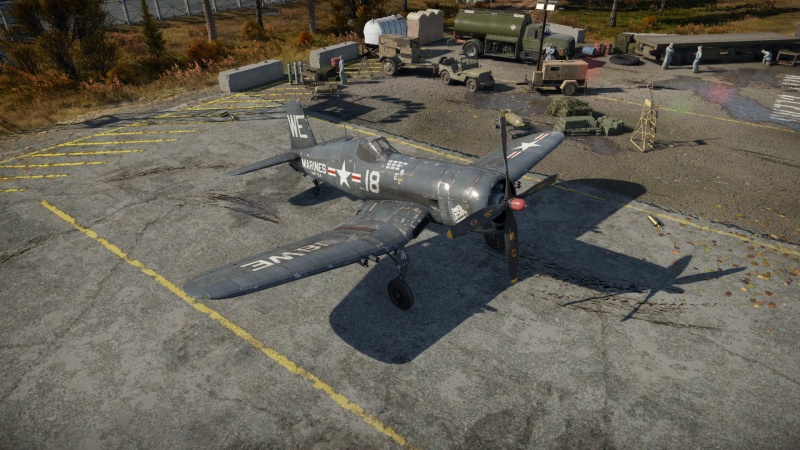 The F4U-4B VMF-214 is a premium gift rank IV American naval fighter with a battle rating of 5.7 (AB/RB/SB). It was introduced in as a premium pack for Xbox players in Update 1.79 "Project X".

The F4U-4B VMF-214 can be outfitted with the following ordnance:

The F4U-4B should be flown primarily at low altitude because its engine lacks power at higher altitudes. Here, it boasts an impressive climb rate (about 25 m/s when spaded), very good acceleration, and a high top speed. You should aim to be around 3-4 km at the start of the battle and go after low enemies using boom and zoom tactics, then use your speed to outrun anyone who dives on you. You can then use your engine power and energy retention to gain an energy advantage over them and easily kill them. If you find yourself in a tough situation, don't be afraid to go a bit aggressive because this plane accelerates very well at low altitude and the extremely powerful guns makes it easy to secure kills quickly, but don't stall yourself out at the deck amidst a cloud of enemies since you'll be an easy kill.

This plane can easily dogfight with Fw 190 Ds, Ta 152s, Tempest Mk Vs, Sea Furies, and similar planes, can dogfight with difficulty with Bf 109s and similar, and should avoid dogfighting unless as an absolute last resort against Spitfires, Ki-84s, A7Ms, N1Ks, and similar planes. Fortunately, the F4U-4B is usually faster than most planes it can't dogfight. It's far faster than most Japanese and Italian props and all Spitfires up to the Mk 22 at low altitude. In an up-tier against superprops like Tempest IIs, Mk 24s, and P-51Hs and F8Fs if you get a mixed battle, you have to rely on coming in with an advantage as with any other plane in an uptier, though this is made easier with the F4U-4B's excellent top speed.

You're best off engaging the F4U-4B at higher altitudes where its performance suffers. You can also try bleeding their energy in hard vertical manoeuvres where it struggles, but be careful while doing this especially at low altitude since a potential opponent can still use the Corsair's stall characteristics combined with its engine power to get a shot off, which can be devastating no matter how short a burst.

The F4U-4B was a modification of the F4U-4. The F4U-4 was based on the F4U-1A Corsair. In order to improve and modernize the Corsair, so it would be able to fight the new Japanese planes in the Pacific, a number of changes were made. One of the major changes was the engine. The Pratt and Whitney R-2800-8W engine was replaced by the more powerful R-2800-18W engine. This -18W engine boosted the speed of the Corsair by up to 46.3 km/h (25 kn, 28.76 mph). When injected with an alcohol/water mixture, the performance could be boosted even further. In order for the propeller to be able to handle the more powerful engine, the propeller had to be changed from 3 blades to 4 blades. Modifications to the fuselage were required, including the addition of a scoop to the lower engine cowling. In addition, the cockpit was completely redesigned. The F4U-4 was armed with six .50 in machine guns, up to 4,000 lbs of bombs and/or eight 5 in rockets.

A variant was to be created for the British Fleet Air Arm of the Royal Navy. It was called the F4U-4C, but none were delivered to the Fleet Air Arm, for whatever reason. The F4U-4C was then redesignated the F4U-4B. The only major difference between the F4U-4 and the F4U-4B was a change of primary armament. The -4B replaced the six .50 in machine guns with four 20 mm cannons. The F4U-4B was used by the US Navy and Marine Corps.

Marine Fighter Squadron 214 (VMF-214), the "Blacksheep" squadron, was aboard the USS Badoeng Strait (CVE-116), on the way to Hawaii, when the Korean War started. The squadron of eight F4U-4B Corsairs was transferred to the USS Sicily (CVE-118), becoming the first Marine Corps squadron to see action in Korea when they attacked ground targets near Inchon on 3 August 1950. On that raid, the Corsairs used bombs and rockets, and then made a several strafing passes. VMF-214 conducted two combat tours in Korea from USS Badoeng Strait and USS Boxer. The squadron participated in the Inchon Landing and the withdrawal from the Chosin Reservoir. The squadron provided constant air support for the friendly ground forces, interdicting supply lines, destroying enemy armour, and destroying fortifications. 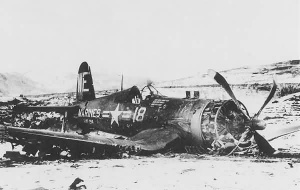 WE-18 after its crash on 26 October 1950. Note the mission markings on the fuselage.This image was published by a Chinese news agency.
Stocks later recounted in an email to koreanwaronline.com:

"Other than that engine change I had very little trouble with her over the two years. I was very proud of her record."

WE-18 was one of the Corsairs that took part in that initial raid near Inchon on 3 August 1950, taking off from the USS Sicily. WE-18 crash-landed in the Chosin Reservoir on 26 October 1950. Bibby was forced to make a wheels-up landing after being damaged by ground fire. Bibby survived the crash, and was rescued by the Marines shortly afterwards. They threw hand grenades into the cockpit and fuselage, destroying the aircraft. By the time it crashed, WE-18 had the marks of 52 successful combat missions painted on the fuselage under the cockpit. Stocks' log from 26 October 1950:

"WE18 didn't return from a mission. I took care of that beautiful Corsair for two years. Now she is gone. I'll never forget WE18. Lt. Joe Bibby was the pilot. He made a wheels-up landing near our Marines. He is ok. They threw a few hand grenades inside the fuselage and cockpit to complete the destruction."