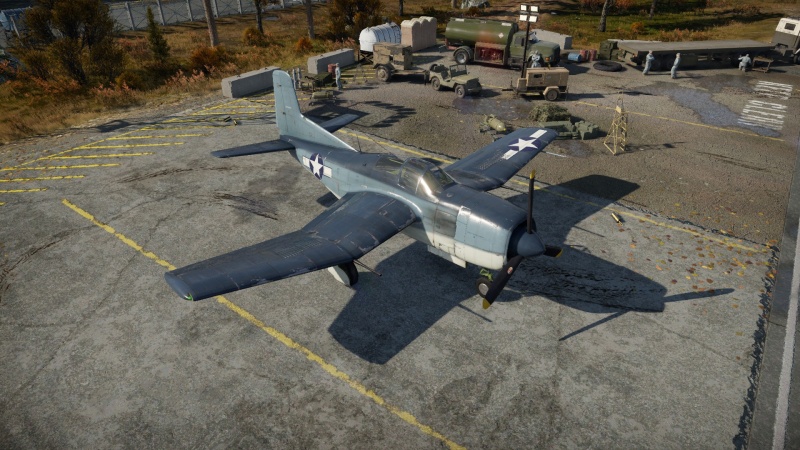 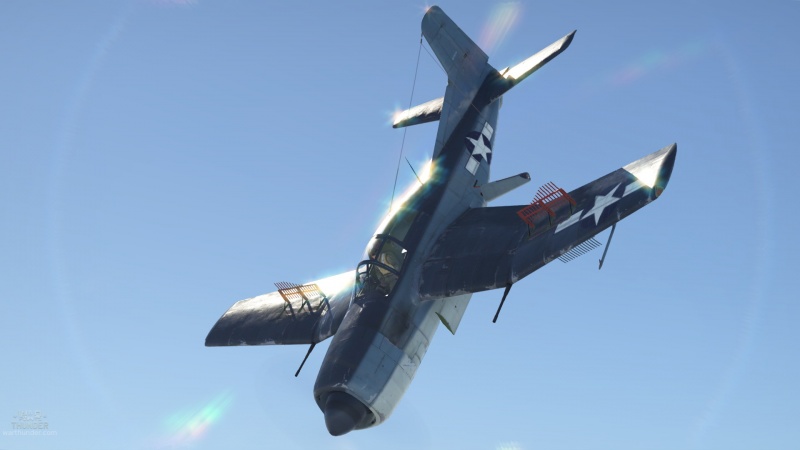 The BTD-1 Destroyer is a premium rank III American naval bomber with a battle rating of 4.0 (AB/RB/SB). It was introduced in Update 1.33.

The BTD-1 is a single engine dive bomber and torpedo bomber and can carry a very wide array of explosive ordnance. This plane can be used effectively against both ground and naval targets. The "Destroyer" can reload on either an aircraft carrier or an airfield. It can also be utilized as a bomber hunter, using the air spawn (on non-carrier maps) and its twin 20 mm cannons to shred stray bombers.

A torpedo-bomber easily recognized by its square-shaped fuselage, the BTD-1 "Destroyer" is a heavily armed single-seat propeller-driven aircraft designed to destroy naval and ground targets. The BTD-1 can, however, be stretched to various different playstyles, even being capable of destroying aerial targets thanks to a pair of 20 mm AN/M2 cannons. With carrier capabilities and a bomber spawn, the BTD-1 can effectively work on most maps and conditions. Although sluggish at higher speeds, the plane performs favourably at higher altitudes. This altitude advantage is quickly lost, however, due to a great loss of energy while turning. When used in ground and air battles, the BTD-1 excels at delivering a large payload to a target with pinpoint accuracy. Along with great survivability and premium-boosters, it's a great vehicle for new players looking to learn how to use both bombs and torpedoes on a single-engine bomber.

Armour plates found inside the BTD-1

The BTD is well known for its bulky fuselage and decent protection. Along with some 9.5 mm plates, the cockpit is outfitted with a 40 mm bulletproof glass plate, giving the pilot decent protection against incoming fire from the front. The wings and fuselage are quite durable, usually tanking the most critical damage before breaking apart. What tends to bring the BTD-1 back to earth are the control surfaces, which either break internally or externally when fired at. The control surfaces of the tail-section being especially vulnerable to damage, which results in the complete abandonment of the BTD-1 if destroyed.

The BTD-1 is armed with:

The BTD-1 boasts two heavy-calibre cannons, capable of swiftly destroying ground and aerial targets. With a penetration of ~30 mm, the shells fired tend to destroy most tanks from above, as well as light pillboxes found in air-battles. Being quite slow in fire-rate, the cannons last quite a long time due to the 200 rounds per gun. This, along with great velocity, makes it easy to destroy targets further out than normal. The AN/M2 cannon is overall reliable, and works with any engagement, as long as they connect with the target.

The BTD-1 can be outfitted with the following ordnance:

By selecting the bomber spawn, the BTD-1 gets the same starting altitude of around 3,500 m. This ensures that the BTD-1 can efficiently intercept bombers if the pilot wishes to do so. By releasing the starting payload and climbing, the BTD-1 can achieve similar or higher altitudes than most planes at its BR, making it a dangerous foe to fight against. On top of this, the BTD-1 has great manoeuvrability at height, which helps it get on top of most enemies it faces. Despite these upsides, it's still important to remember the weight of this plane. Any fighter with an energy advantage will make easy work of a BTD-1 due to the weak power output it offers.

Using the BTD-1 for its intended purposes makes the plane shine. Although quite sluggish with bombs loaded, the large payload of up 2,000 lb of bombs or two naval mines is very effective, giving the pilot options to attack most naval, or ground based targets with guaranteed success. The recommended procedure for dive-bombing can be simplified to pointing your plane straight downwards at a target after flying above it. This can be, for example, a destroyer or an enemy base. At this stage, the BTD-1 has no problem unleashing its payload and getting out of trouble. If extra time is needed to adjust the planes heading, the large air-brakes can be deployed, slowing the plane enough to safely dive as far down as the player wishes.

On certain occasions, the BTD-1 has the opportunity to destroy naval vessels. If this be Naval battles or Air battles, the overall destructiveness of a torpedo stays the same. The BTD-1 can equip two 1,927 lb torpedoes, capable of being dropped at almost 400 km/h. These torpedoes are enough to sink a destroyer each, or a single carrier. Even though this role requires patience and a lot of flanking to avoid ship AA defences, it remains a fun and unique way to deal damage to enemy ships. Most pilots will find enjoyment in having a single-engine plane capable of taking two torpedoes. Just remember to stay aware of enemy fire, since the heavy torpedoes and low altitude make it almost impossible to dodge enemy shells.

The BTD-1 is heavily used as a support plane in ground battles, where the payload becomes even deadlier than before. Thanks to strong air-brakes and a center-mounted payload, the plane can accurately bomb most vehicles below it, resulting in 1-2 guaranteed kills if done professionally. Although dive-bombing is more precise, the BTD-1 can engage targets like any low-altitude frontline bomber. If a pilot gets comfortable with the drop-speed of the payload, the tanks below will have a much harder time avoiding incoming bombs. This, however, requires training but usually leads to better results thanks to the faster engagement speed.

ZSD63: Though it is hard to identify specific SPAA vehicles on the ground (especially when they are shooting tracers at the plane), if a ZSD63 is identified, avoid it at all costs and do not attempt head-ons with it, ever. It can easily snap a wing off by causally putting a short burst in the BTD-1's flight path. Don't even get close to it unless it is occupied with another friendly or if the BTD-1 is equipped with a bomb that it can use. Some identifying features of the ZSD63 is its rather boxy and tall hull with a geometric turret sitting at the back, slightly similar to a Wirbelwind's. The firing manner is also distinctive: the sound and green tracers are very rapid, much like a buzz saw, but then it will remain silent for half a minute reloading. Note that an experienced ZSD player will hold its fire or shoot in single salvos with long halts between, making it look like it's reloading. Armour-piercing belt is recommended since their high penetration can tear through the ZSD's armour with ease and knock out its crews.

The US Navy ordered two prototypes from Douglas Aircraft Company for a two seat dive bomber in June of 1941. The dive bomber was intended to replace the Douglas SBD Dauntless and Curtiss SB2C Helldiver. The project was designated as the XSB2D-1. The design was a single-engine dive bomber with an inverted gull wing. It was armed with two wing-mounted 20 mm cannons, two remote-controlled turrets - each with two .50 cal machine guns - and up to 4,200 lbs of bombs in the bomb bay and on wing-mounted pylons.

The prototype first flew on 8 April, 1943. The performance was significantly better than the Helldiver, and it could carry nearly twice the payload. The Navy ordered 358, but changed the requirements to a single pilot dive bomber / torpedo bomber with no defensive turrets before any were made. Douglas removed the turrets and second crewman from the XSB2D-1, added more armour and fuel, and redesignated the design as the BTD-1 Destroyer. The ability to carry torpedoes on the wing racks was added. The BTD-1 first flew in March of 1944. In June of 1944, the first BTD-1's left the factory. The BTD-1 entered service too late to see combat in World War 2, as only 28 BTD-1's had been completed by August 1945, when Japan surrendered. The order was cancelled, and that was the end of the BTD-1's service.