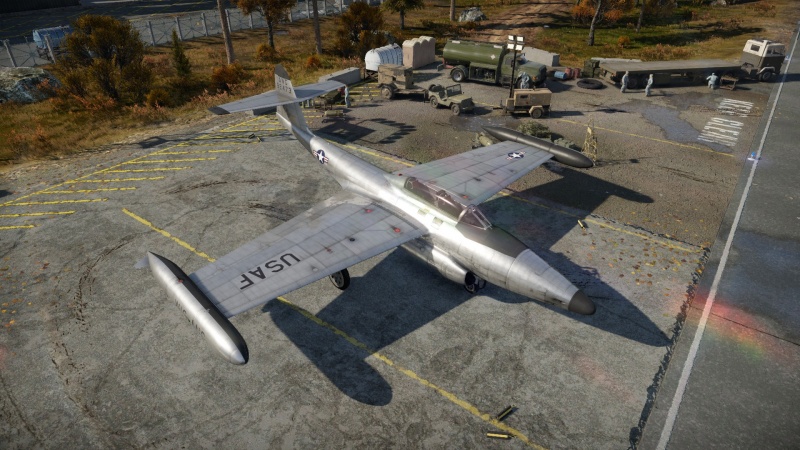 The F-89B Scorpion was designed and built to be an all-weather interceptor intended to neutralize any potential invading Soviet bomber force. The USAAF was intent in replacing the P-61 Black Widow with another night fighter, one specifically which would fly faster (minimum 850 km/h (530 mph)) almost assuredly requiring the usage of jets, six sixty-calibre machine guns or 20 mm autocannons and armed with internally stored aerial rockets. To round out the aircraft for ground attack if needed, it would also need to accommodate 1,000 lb bombs and eight larger rocket types externally. Initial wind tunnel testing of the fighter determined that the proposed swept-wings were insufficient at slow speeds and were changed out with straight wings. Though causing a loss of high-end performance, increased stability at low speeds was necessary.

The F-89B has two 12.7 mm steel armour plates in the nose and a 60 mm bulletproof windshield. The wing tips will break past the aileron at 920+ km/h (depending on altitude) and will count as a vehicle loss. However, the plane can limp back to base if the pilot: maintain speed/don't turn sharp to avoid a spin, approach the airfield low and straight on, open the air brake to help balance the broken wing, roll the intact wing down, lower the gear at < 300 km/h then roll back level onto the runway. There the pilot can repair his plane and get back in the fight!

This aircraft has deadly frontal cannons, but they also have a very high rate of fire, so it is recommended to keep an eye on ammo count through the course of a battle. Air Target belts are the most effective ammunition belt for destroying enemy aircraft and the AP belt for ground units. Usage in ground RB: The F-89B is an effective ground attack aircraft if used correctly. With the 20 mm ammunition belt for armoured targets, with 53 mm max penetration, can effectively neutralize most adversary ground units of its battle rating. It can also be used in any game mode as a very potent fighter.

Although fast, this plane has poor rudder authority at high speeds, and this makes high speed boom and zoom attacks more difficult. Its large tail section also makes aiming challenging at times. However, this setup also gives the plane good elevator authority under 800 km/h and especially between 700 and 750 km/h. Above this speed (and below 600 km/h), elevator control also suffers. Although perhaps not comparable to the Ho 229, this plane does have a much better turn rate than the Me 262. Finally, the roll rate is moderate. Horizontal axis manoeuvres are best conducted rolling the aircraft vertically and turning with the elevator.

This aircraft is prone to wing-ripping above 900 km/h, and when in a dive, it may be necessary to employ the vehicle's very effective air-brakes in order to stay below this speed. It is also important to note that utilizing the afterburner in level flight may cause a fatal accident if speed is not maintained within limits. Wing-rips are also common when concurrently pulling negative G's and rolling.

Thanks to the F-89B's afterburners, it has excellent acceleration, and can out-climb most aircraft at its tier. Its high output engines gives players a huge advantage in the battle-space. Players can exploit its high acceleration and speed. When dogfighting, the F-89B performs very well in vertical manoeuvres. The aircraft's afterburners give the pilot a significant advantage over adversaries without after-burning engines.

The F-89B is equipped with an AN/APG-33 tracking radar, located in the nose of the aircraft.

Almost immediately after WWII, the Nothrop Corporation began developing an experimental jet fighter-interceptor to meet the new requirements for that class of aircraft. The American interceptor's primary targets were supposed to be Soviet bombers, so the projected model's flight characteristics and armament had to meet this objective. At first the two-seater twin-engine jet was developed to have a rather interesting four gun turret. This turret was to be mounted on the aircraft's nose and could fire on targets either automatically or manually along a vertical plane either forward, up, down or, in some cases, backward. However, when the experimental model of the aircraft was ready, the turret still hadn't undergone testing yet, so the military decided to install traditional static frontal guns on it, as well as HVARs on the wing pylons. It was with this loadout that the Scorpion F-89A and F-89B went into service. The armament was switched exclusively to rockets somewhat later. To make the change to rockets, the designers implemented an interesting solution: Mighty Mouse unguided rockets were installed on the front of the wing-mounted fuel tanks in such a way that the rocket and fuel sections of this part of the design were separated by a fireproof barrier. This also made it possible to install heavier, more destructive HVARs under the wing. The F-89D or "rocket" version of the Scorpion went on to become the most widespread version of the aircraft in the US air force – 682 of them were manufactured.