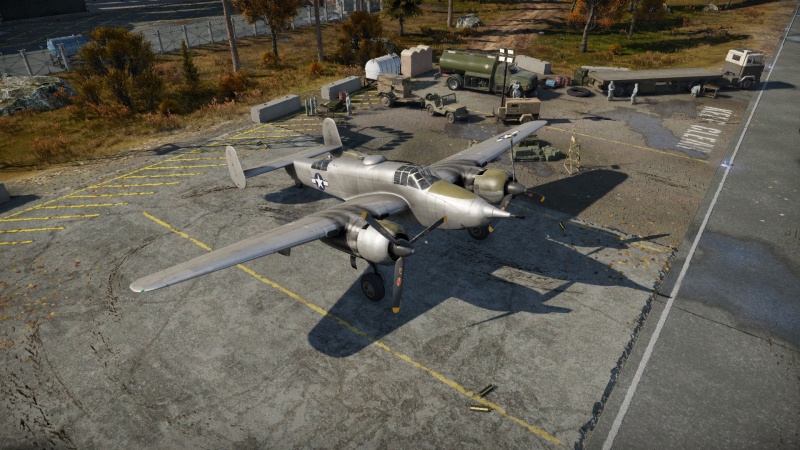 Thanks to its air spawn and impressive top speed, the XA-38 Grizzly can be used as a bomber hunter. The ammo of choice when dealing with enemy bombers is HEI-T: 1 single hit from this shell will destroy any airframe. The well-armoured cockpit also means the pilot will be well protected from the defensive armament of any bomber it attacks. However, the XA-38 is one of the larger targets a bomber can shoot back at, and the unprotected engines can easily be set on fire or disabled entirely. You'll also be prey to any enemy fighters or interceptors that choose to take advantage of your new role. This is less of an issue when hunting bombers at low altitude, as you can often take out a bomber and retreat before the enemy fighters can respond.

The XA-38 is a great plane for ground pounding. The 75 mm cannon AP-T can reliably destroy pillboxes, medium tanks and light tanks, while the HEI-T can destroy any thinly armoured vehicles. The option to carry 4x 500 lbs bombs also gives some extra opportunities for killing targets, although these are wing-mounted bombs, which are not only inaccurate but also hamper your speed somewhat. In Air RB, these bombs often work best to eliminate AA and armoured cars at the back of tank convoys, clearing any potential anti-aircraft fire before engaging the tanks.

The Grizzly is a fast aircraft, and this should be used to your advantage. Dive in fast and escape fast and you can effectively dodge AA fire, as well as outrun some enemy fighters at low speed, especially when top tier. Also, the .50 cal gun turrets can be used to strafe ground targets after your first pass, although it's recommended to load the armoured target or universal belts to ensure maximum damage. These guns are quite accurate, have a good rate of fire, and can eliminate light tanks and light pillboxes.

The drawbacks to the Grizzly come with its main armament. The 75 mm gun, while immensely powerful, has a very slow rate of fire, meaning you're only likely to get two shots maximum at a target before you pass over it. Also, while it can kill light pillboxes, it might take multiple hits, which can be a waste of ammo since the gun only has 20 shells total. Don't be afraid to use your machine guns in addition to the cannon when targeting pillboxes. These MGs, while effective, are also lacking. There are only two of them, and they carry mid-war belts, meaning they don't pack as much punch as a lot of the 12.7 mm MGs on a lot of American fighter-bombers at this same tier. Thankfully, they are nose-mounted, meaning they're very accurate even at long ranges.

Finally, the Grizzly can be an easy target for low-altitude interception. The fuselage is a large target compared to single-engined planes, and only having one, very exposed gunner means you can lose your defensive armament immediately when attacked from above. Use your good speed and decent turn time to avoid shots and spray interceptors with the .50 cal guns to ward them off. Also, avoid head-ons. While the 75 mm might be tempting as a one-shot-machine, its poor rate of fire and long-range accuracy makes it useless in head-on engagements against the many cannon-armed fighters you face at this tier. Your MGs also won't be much help since there are only two of them. Keep fighters behind or away from you and use your gunners' excellent firing arcs and ammo counts to ward off opponents.

In December of 1942, the USAAF gave Beech Aircraft Corporation a contract to construct 2 prototypes of their Model 28 Destroyer. The Model 28 started off as a bomber design, but was changed to a ground attack aircraft, in order to replace the A-20 Havoc in service. The design included a 75 mm cannon in order to ensure the plane could destroy armoured bunkers and tanks. 20 rounds were carried for the 75 mm cannon. There were also two .50 in Browning machine guns in the nose. There was a ventral and dorsal turret for self defense, with two .50 in Browning machine guns in each. The aircraft carried a crew of two, the pilot and the gunner. The gunner controlled both defensive turrets by remote control, using periscopes to aim. The Model 28, redesignated as the XA-38 Grizzly, started testing in 1944. It was proven to be reliable, and flew well in all regards for an attack aircraft. In addition, the armament was especially powerful and potent. However, the aircraft was never ordered, and never entered service.