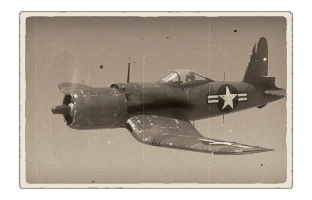 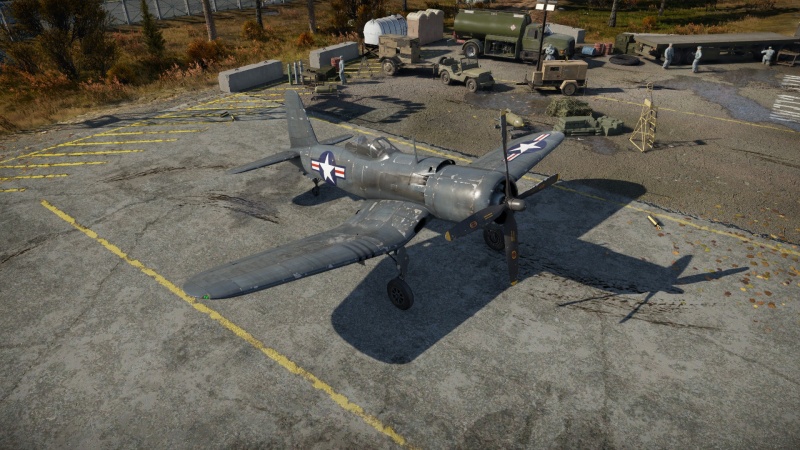 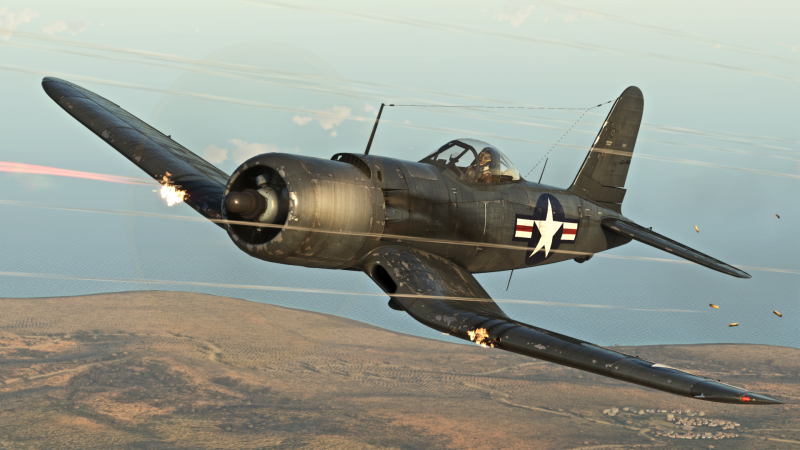 The F2G-1 "Super Corsair" is a premium gift rank IV American fighter with a battle rating of 5.3 (AB), 6.0 (RB), and 6.7 (SB). It was introduced during Update "New Power" as a reward for Battle Pass: Season I. The Super Corsair was a development made by Goodyear, a licensed manufacturer of the Vought F4U Corsair. The Super Corsair was intended by Goodyear as a low altitude fighter.[1] Powered by the Pratt & Whitney 28 cylinder R-4360 Wasp Major engine, nicknamed the "Corncob," the Super Corsair made 3,000 hp. By the time the Super Corsairs was ready for production the Grumman F8F "Bearcat" was already being built and had similar performance. Partially due to this, only 10 Super Corsairs were ever completed, 5 of which were the F2G-1 land variant found in game.[1]

The F2G-1 has an excellent straight-line speed at all altitudes, together with a fantastic roll rate and a brilliant flap performance. The engine allows long usage of WEP before heating up and has a stellar engine performance below 3,000 m but the engine performance declines above 3,000 m, and becomes weak above 5,000 m. The acceleration declines strongly above 4,000 m and engine radiators are hard to be kept closed in Automatic Engine Control mode, adding some drag.

The F2G-1 shows great performance in shallow high speed climbs but the plane has an overall lacklustre manoeuvrability.

The great low-altitude engine performance combined with the strong flap performance allows the F2G-1 to stall fight quite well. However, it has a slow stall recovery: it's suggested you flip your plane horizontally with your rudder prior to a stall. The flaps have relatively low rip speeds for this plane and they will not open at all when above a certain IAS velocity. The Landing gear can be used as an improvised airbrake instead. Elevator & rudder compressions become a handicap upwards of 700 km/h.

The F2G-1 can be outfitted with the following ordnance:

Sitting a 6.3, this aircraft is blessed with being at Ju288 br. This means a guaranteed win almost every game, easy bombers to kill and a comfortable air superiority in which you can ground pound in. (Once all nearby enemies lie dead).

Generally, this aircraft is best suited to the in-game American doctrine of boom-and-zooming. In composition with stellar dive speed, engine performance, and long-range weaponry: you have great capability to dance around other propeller planes with relative impunity. Due to this, this is an amazing plane for dogfights, which you should always engage in. You should be cruising at ~3km, a perfect altitude to dive on any ground huggers or to dive away from any climbers who might swoop down upon you. Any dogfight you wish to initiate should be prioritized energy-wise; you should master the use of your flaps, they will give that needed edge. Keep fights low. In the circumstance you are below another propeller plane, you should extend the other direction and increase your IAS. Climbers like Bf 109 K-4, Ta-152 H, G.56, and so on, will not peruse you. Alternatively, you may try baiting them into a dogfight.

On the other end, a fully up-tiered F2G will be faced with early jets. Any attempts to outperform them in straight lines, be they flat runs or shallow climbs/dives, may often result in failure. Although you do have a chance to catch most jets by surprising them with steep dive. You should take advantage of the F2G's superior low speed acceleration and handling. Be quick and decisive in punishing jet players who attempt to turn with you, as a manoeuvring Super Corsair tends to quickly grab attention from other enemies. However, express caution when attempting to engage Kikka, J21R, F-80, and so on. Many early jets have comparable manoeuvrability to you, while still boasting solid top speed and horizontal energy retention. To your benefit, their acceleration is still lacking, so it is still possible to successfully counter them in a manoeuvring fight. Try to fight under 3,000 m (9,800 ft), as your engine's high altitude performance is inadequate.

If you are being boom-and-zoomed by a jet, there is not much you can do. Your guns are long-range, high-velocity, and cover a large area, so spraying down the engines of your enemy is a valid tactic, just watch your ammo. Ultimately, you must continue dodging their BnZ passes until they become impatient and make a mistake. Do not try and pitch up for too long after they zoom, the superior top speed of all jets will allow them to easily stall you out, despite your impressive engine.

The F2G-1 does not have meaningful overheating problems. In the case you do, however, it is recommended to utilize 85% prop-pitch, and to optimize your oil radiators to ~100%, given they have almost no drag. 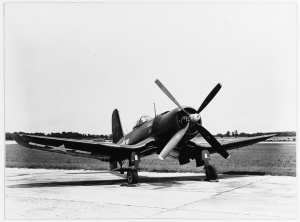 Seven prototypes were built and designated as XF2G-1, being modified production FG-1 Corsairs (a Goodyear-produced, fixed wing "de-navalized" version of the Corsair). The first XF2G-1 (Bu.No. 13471) was fitted with the R-4360 engine but retained many characteristics of the standard Corsair, including the canopy and cockpit, though the engine cowling was extended and an air scoop was added on top of the fuselage right behind the engine cowling. It began ground testing on 31 May 1944, and first flew on 26 August of the same year. The second XF2G-1 (Bu.No. 13472) was used to test new aspects including oil coolers and propellers, which would be used on later XF2G-1s.

The remaining five prototypes (Bu.Nos. 14691 through 14695) were modified much more extensively. They featured a new bubble canopy and a reduced spine, in order to provide better visibility to the pilot. Additionally, the cockpit was redesigned; it received a floor and new controls quite similar to those used on the Vought F4U-4 version of the Corsair. The XF2G-1 retained the six .50 cal (12.7 mm) machine guns of the FG-1 as well as the same ordnance carrying capability, but they were modified to allow the carrying of external, jettisonable fuel tanks for extended range.

Bu.No. 14691 used the engine taken from the first prototype, Bu.No. 13471, and it first flew on 15 October 1944. Bu.No. 14692 added wing-mounted fuel tanks and improved vertical control surfaces. Bu.No. 14693 was fitted with the R-4630-4W version of the R-4630 engine, which introduced water-ethanol injection for increased power, but the -4W version of the engine was not fitted to any other version of the F2G. The final XF2G-1, Bu.No. 14695, had its first flight on 4 December 1944. Both 14692 and 14695 were lost in separate accidents on December 12th 1945: 14692 lost hydraulics inflight which led to its undercarriage extending to a position in which a safe landing could not be made, so its pilot bailed out; while 14695 suffered a similar hydraulics failure but in its case the pilot was able to make a safe belly landing. However, on recovering the stricken aircraft, the crane used to salvage it failed and collapsed on top of the aircraft, effectively destroying it.

On 27 November 1944, the XF2G-1 was given to the U.S. Navy for testing. Some issues arose during testing, particularly that the engine torque of the engine would cause the aircraft to turn hard to the left in a carrier wave off (when increasing the throttle in the case that the landing had to be aborted). In the case of a wave off and the throttle being applied, the rudder was not able to prevent the nose swinging to the left. To prevent this effect, the rudder was heightened by twelve inches and an auxiliary rudder was installed beneath it which would automatically turn 12.5 degrees to the right when the landing gear was extended, in order to counteract the torque of the engine.

Production of the F2G had been cancelled due in part to disappointing test results. The F2G-1 had an impressive climb rate of 4,400 feet per minute, but its top speed of 430 mph (692 km/h) was rather disappointing, and it also had some stability issues. Overall, its performance wasn't a large enough improvement over other aircraft in production, particularly the F4U-4 and F8F-1 Bearcat, which is why the production orders for the F2G were cancelled. 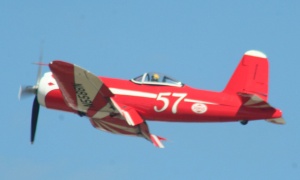 Note: There was an aircraft named Super Corsair and later "Race #1" , which despite the name was not an F2G. It was an F4U-1D fitted with the R-4360 engine, clipped wings, and a modified cockpit.