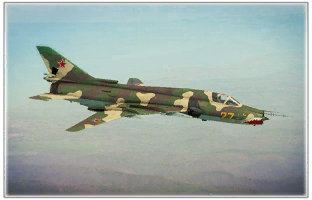 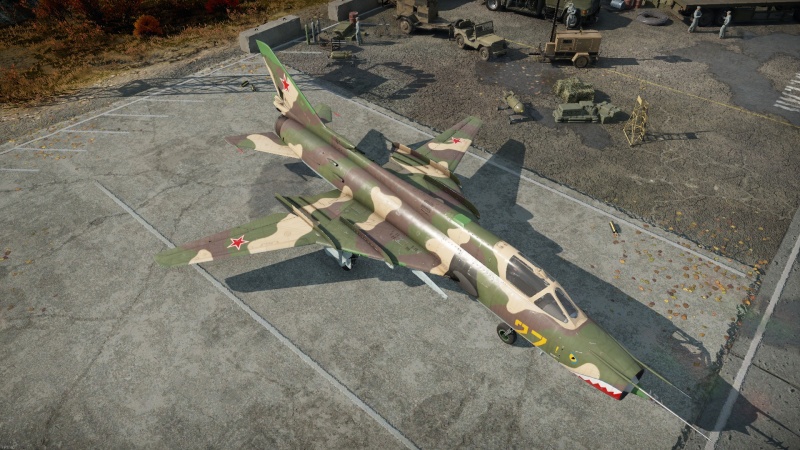 The Su-17M4 is a later model of the swing-wing "Fitter" attacker family. Compared to the previous Su-17M2, it uses a revised airframe shared by the Su-22M3 with a drooping forward fuselage and a noticeable hump behind the cockpit. The flight performance remains practically unchanged, still enjoying good speed and the versatility afforded by its swing wings. In-game, its most notable improvements over other models are the ability to use all-aspect R-60M infrared missiles for air combat and a large supply of 268 countermeasures for self defense. It also enjoys the widest suite of ground attack weapons, featuring the S-25 heavy rocket seen on the Su-22M3 and the Kh-29T TV-guided missile seen on the MiG-27M/K. Although the Su-17M4 is more primitive than the MiG-27K and cannot fulfill the same long-range CAS role afforded by the Flogger's advanced targeting systems, this Sukhoi is still a robust strike platform with plenty of hardpoints and a large arsenal.

The Su-17M4 can be outfitted with the following ordnance presets:

In air battles, the Su-17M4 will suffer against most targets it comes across as the plane itself is an attacker. You are not manoeuvrable and engaging in dogfights is strongly discouraged. Due to the presence of radar missiles, the best way to play the plane in RB is to be a support fighter, trying to stay away from the action before coming in either from the side or on top of a furball/enemy while everyone is distracted, using your R-60Ms to your advantage. Your RWR will be useful and if you do receive a radar lock, it is best to notch and/or try to run away from the enemy, hoping to deter him from attacking you. Head-on attacks are usually not advised as while the R-60Ms are all aspect, they can be easily flared, and it's better to keep them for a more useful situation, unless it's a last ditch effort. Bombing bases can be done but flying directly straight in to the map is risky. On bigger maps such as EC matches, it may be a good idea to take some ground ordnance, and hit ground targets to bleed the enemy tickets, as being a pure "fighter" will usually end in a bad situation.