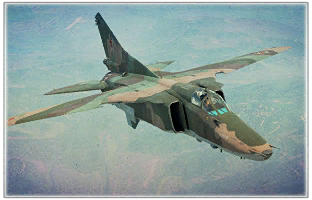 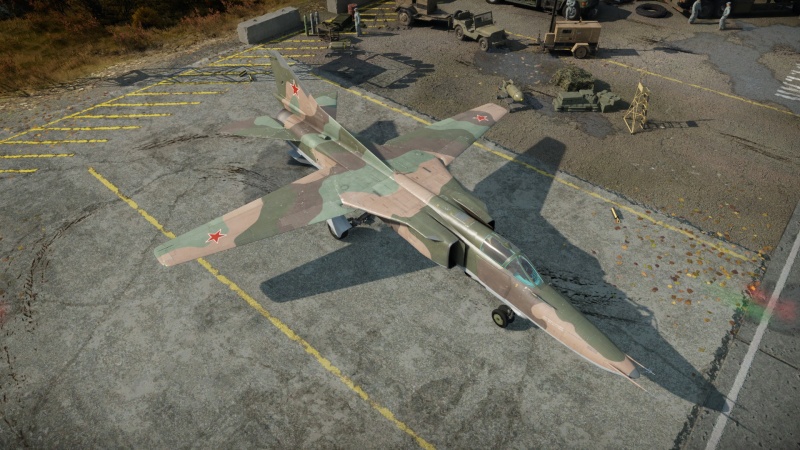 The MiG-27M is a rank VII Soviet jet fighter with a battle rating of 11.0 (AB/RB/SB). It was introduced in Update "Direct Hit".

The MiG-27 series of attacker aircraft are derivatives of the MiG-23 fighter. While most airframe details are similar, they have new downward-sloping noses with ground attack targeting equipment instead of radars and the air intakes have fixed intake ramps. This MiG-27M variant has access to a wide array of ordnance previously seen on the Su-17M2, such as 500 kg unguided bombs and the Kh-29L laser-guided missile, and new options in the form of the KAB-500 TV-guided bomb and the R-60M all-aspect IR missile. It also has the infamous GSh-6-30 gatling gun with a terrifying burst mass. The MiG-27M is a unique attacker that can defend itself in air combat while raining pain on ground targets through long range precision bomb strikes, close range gun runs, and many things in between.

MiG-27 enthusiasts can look forward to the succeeding MiG-27K with laser-guided bombs and improved targeting systems.

This aircraft has an excellent top speed, which means it can speed away from enemy fighters if needed, with flares and chaff assisting in countering incoming missiles. Despite being a heavy aircraft, the MiG-27M has one of the best sustained turning abilities among top-tier jets thanks to its variable swept wing design.

The MiG-27M, just like the MiG-23M, feels sluggish in manoeuvres. However, despite the bad instantaneous turning and rolling ability, the MiG-27M has exceptional sustained turning and rolling ability for a medium-heavy fighter. At speeds lower than 900 km/h and with the wings turned to forward position, the MiG-27M can outmanoeuvre most top-tier jets, even including the F-5Cs and MiG-21s. At 400 km/h, with the wings set to the most forward position, the MiG-27M somewhat resembles a piston-engine attacker, with superb lift and great sustained turn rate. This is extremely helpful in a 1v1 situation, where you can use this characteristic to trick your enemy into low speed and outmanoeuvre them easily.

To be noted though, the high-speed manoeuvrability of the MiG-27M is not exceptional at all. At supersonic speeds and the wings fully swept back, the MiG-27M can only pull 8Gs of overload, significantly less than the 10 to 11Gs of the F-4Es and the JA-37s. Also, the MiG-27M does not hold its speed well in turns. In such case, it is advised to keep your speed and do less manoeuvres in most times during a battle.

The plane gets some 10 mm armour behind the pilot, and 9 mm on each side of the pilot. This will not really save you against the firepower faced in top-rank jet battles and is more against the stray machine gun round or shrapnel from ground attacks.

The GSh-6-30 is the most powerful cannon mounted on any top-tier aircraft. It uses large 30 mm rounds and has an incredibly high rate of fire at just under 5,000 rounds per minute. This means that it will fire about 83 rounds every second! A brief burst will obliterate any aircraft. In a ground attack role, it will perforate thinly armoured targets like light tanks and SPAAs and can even penetrate the roof armour of some MBTs. However, there are a few things to keep in mind: as with other Gatling guns, it needs a brief spool-up time before firing that should be accounted for when firing short bursts, and the 300 round ammunition supply can be depleted in no time at all — about 3.6 seconds to be more precise.

The MiG-27M has a good supply of large-calibre countermeasures, launched from dispensers mounted on the wing gloves. Their number and size make it much easier to defend against missiles from enemy aircraft and disrupt the radar locks of SPAA.

The MiG-27M can be outfitted with the following ordnance presets:

As an attacker, the MiG-27M's air-to-air armament has been downgraded compared to the MiG-23M. It lost the ability to carry the medium range R-23R/R-23T missiles and thus has no BVR capabilities. It can still carry the all-aspect R-60M IR missile, which are suitable for dogfights, but only four can be carried at once.

The ground attack armaments are understandably much improved over the original Flogger. New offerings here include laser-guided Kh-25ML and Kh-29L missiles, TV-guided Kh-29T missiles, TV-guided KAB-500Kr bombs, S-8KO rockets, ZB-500 incendiary bombs, and 23 mm gun pods. The guided weapons are the MiG-27M's most important tools in Ground RB because they can engage and destroy targets from relatively safe distances. However there are a couple of limiting factors: the MiG-27M has a primitive laser designation system with a narrow field of view, low zoom, and no actual targeting pod. Thus it can be difficult to identify, track, and hit targets with the laser-guided weapons, especially when flying at high speeds. The Kh-29T and KAB-500Kr are easier to use because of their onboard TV cameras and fire-and-forget nature, but be aware of the drawbacks of TV-guided weapons: poor performance at night and the inability to redirect them if a target is destroyed or breaks line of sight.

Thanks to its great low-altitude performance and powerful cannon armament, the MiG-27M can be a good fighter jet in Air RB. Generally speaking, the best tactic for playing it as a fighter jet is similar to that of the MiG-23M: heading to the left after take-off, keeping the altitude under 500 m, postponing your entry as late as possible, then engaging in head-on combat using the all-aspect R-60Ms and your powerful GSh-6-30 cannon.

Since the MiG-27M has a significant low-altitude speed advantage compared with most of its opponents, it is advised to keep your speed throughout the battle. However, when there's only one or two enemies left, the MiG-27M could quickly become a dogfighter by setting its wing to about 50% angle. In such a setting without load, the MiG-27M can pull 11Gs at 900 km/h, and with even more aggressive dogfighting techniques and less angle for the wing, the MiG-27M is capable of dogfighting light fighters like F-5Cs and MiG-21MFs.

The MiG-27M could also be played as an attacker in Air RB. When doing so, though, it is still advised to take the 4 R-60Ms and play using the tactic mentioned above to maximize your survivability. Once flanked to the back of the enemy, rush to a base and drop your bombs, then either play it as a fighter jet or ground strike the enemy targets.

The MiG-27M is a great aircraft for ground RB because of its decent manoeuvrability, the variety of guided weapons it can carry, and its GSh-6-30 cannon. To use it effectively, first shoot down any opposing aircraft using the R-60Ms, then deploy whatever weapons you have on-board against tanks. The cannon is also remarkably effective against the thin sides of western MBTs and other lightly armoured targets. Using all your armaments effectively, it is possible to kill quite a few targets in one run. KAB-500s will not follow moving targets so it is recommended to drop them from short ranges which can be difficult due to the loss of control in the targeting mode. Also be careful not to exceed Mach 1 when attempting to drop bombs or they will not drop. Kh-29Ts will track targets but only have a lock and launch range of 5 km. In addition, the Kh-29T loadout does not contain R-60Ms, leaving you vulnerable to rival CAS.