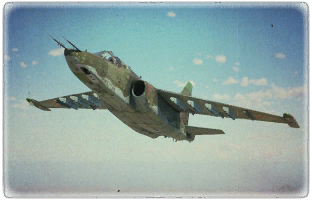 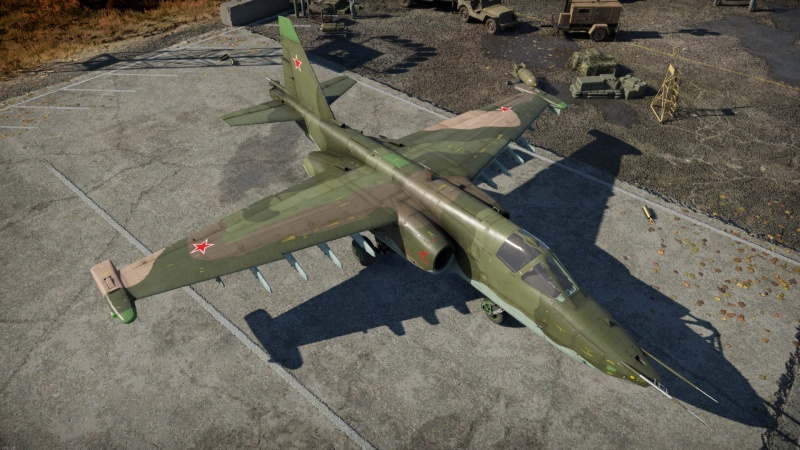 The Su-25 is a rank VI Soviet strike aircraft with a battle rating of 9.7 (AB/RB/SB). It was introduced in Update "Drone Age".

The Su-25 is known for its survivability, anecdotally being able to take a few missile hits without suffering any damage compromising its airworthiness, though this ability is inconsistent and should not be relied upon.

256 flares/chaff launched two of each at a time provide the Su-25 with the chance to evade missiles, which should be the primary form of defense. A lack of afterburner increases flare effectiveness, only very modern missiles such as aim-9L are able to track the aircraft from behind.

Chaff only defends against radar locks from behind the aircraft. Sometimes enemy radar-guided missiles can be shot down with R-60M, allowing the Su-25 to engage surface-to-air missile systems in a head-on such as FlaRakPz1, XM975, Roland 1, and Lvrbv 701, as they only have two missiles each.

The aircraft remains somewhat controllable upon loss of tail control, wingtips, or an engine.

The fuel tanks are self-sealing.

The aircraft has an engine fire extinguishing system, unlockable as a modification.

The Su-25 can be outfitted with the following ordnance presets:

The Su-25 is best suited for low altitude attack runs on enemy ground units. Its multitude of air-to-ground weapons as well as its good survivability allow it to perform CAS role in Ground Realistic Battles very well. In Air Realistic Battles, it still is a force to be reckoned with in terms of ground attack, being able to erase a huge chunk of enemy points if left alone. The large quantity of unguided rockets allows for mass destruction of most ground targets. Additionally, the GSh-30-2 cannon will easily rip through light, medium and heavy tanks from the sides or the rear, the same applies to light pillboxes if aimed at the top. The aircraft can also use its bombs for striking strategic bombing points. In terms of air-to-air combat, the Su-25 can utilize its excellent R-60M missiles for self-defence, being able to lock onto incoming enemy planes from any direction. Keep in mind that as long as you maintain your speed, you might keep up in a dogfight with an opponent but after a few turns the aircraft will bleed a lot of speed and become very sluggish.